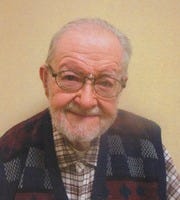 Glenn A. Anderson, 91, of Rockford, died peacefully on Friday, January 13, 2023, surrounded by his family. Born April 18, 1931, in Rockford, the son of Harry A. and Ebba I. (Andreen) Anderson. Graduated from East High School. Glenn then attended Rockford Business School where he studied accounting. Glenn married Veronica M. Kohl on May 4, 1958 in Harvard, IL. He worked at Warner-Lambert Company before retiring in 1986. Glenn was a member of Trinity Lutheran Church.

Funeral Services will be held at 2:00 pm on Saturday, January 21, 2023, at Trinity Lutheran Church, 200 N 1st St., Rockford, IL 61107. Visitation will be from 1:00 to 1:45 pm prior to the service . Memorials may be made to Trinity Lutheran Church. The family would like to thank all the people at Northern Illinois Hospice and Cedarhurst Senior Living for their loving care. To share a memory or condolence, visit olsonfh.com.