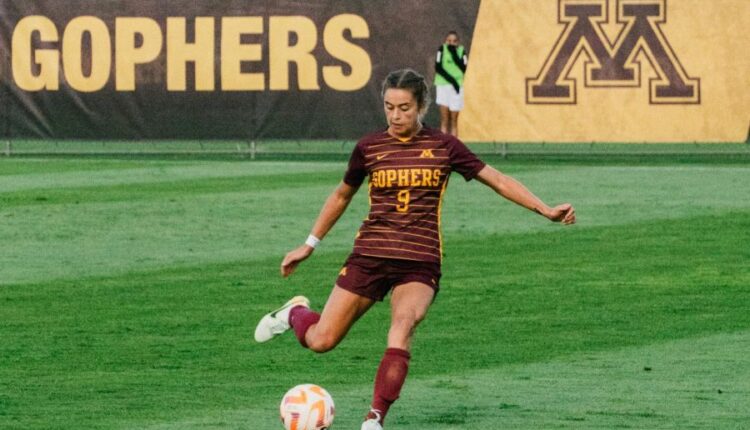 Minnesota returns to the Big Ten Tournament for the first time since 2018 as it faces the Spartans in the quarterfinals.

Midfielder Sophia Boman goes to kick the ball during the Gophers’ game against Indiana, Thursday, Sept. 22. The Gophers won, 3-0.

Nineteen minutes into Sunday’s game, Sophia Boman and Sadie Harper each scored within three minutes, giving Minnesota a 2-0 lead heading into the second half.

The two-goal lead stood until the 74th minute when Illinois’s Kennedy Berschel scored on a penalty kick. In the final three minutes, Makala Woods tied the game with her third goal of the season.

Time expired in Champaign, Illinois, and the Gophers concluded their regular season with a 2-2 tie to the Fighting Illinois.

The draw was not detrimental for the Gophers because they already clinched a spot in the Big Ten Tournament with their previous win over Purdue. Minnesota’s 4-4-2 record was enough for eighth place in the Big Ten, setting them up for a quarterfinal matchup with the number one seed, Michigan State.

How does Minnesota fare against Michigan State?

The two teams did not meet this season, but last year, Michigan State beat Minnesota 2-1.

No. 6 Michigan State completed its Big Ten regular season with a 9-0-1 record and went 14-1-3 overall. It scored an impressive 38 goals in 18 games, with half of those goals coming in 10 conference games. This is a significant improvement from last season when the Spartans only scored 26 goals in the same amount of games.

Senior Lauren DeBeau led the team with 10 goals in 17 games. DeBeau was tied for first for most goals in the Big Ten with seven but stood alone with the best goal-per-game average of .778. The Spartans’ offense was relentless in the Big Ten, averaging 6.9 shots on goal per game and scoring on approximately 28% of their shots on target.

It is quite evident that Michigan State has a high-powered offense, but the back end of their squad has talent as well. Starting goalkeeper Lauren Kozal had a save percentage of .917 in conference play – the only goalkeeper in the Big Ten to record a save percentage higher than .900. In total, Michigan State only allowed three goals in ten games and had seven shutouts.

The defensive end of Minnesota’s squad is where they may struggle against Michigan State. Megan Plaschko has been outstanding for the Gophers, posting a .750 save percentage as well as three shutouts in 10 conference games. However, there were a couple of late-game defensive collapses that resulted in losses for Minnesota. In their matches against Nebraska and Wisconsin, the Gophers conceded the game-winning goal in the final five minutes of the contest.

To suppress Michigan State’s offense, the Gophers need to open the scoring. Minnesota has a 4-1-1 record when scoring first in conference games. Michigan State’s one loss this season came to no. 9 Arkansas, who defeated the Spartans 1-0. The Razorbacks outshot Michigan State by three-fold, with nine shots on goal to three. This shot discrepancy allowed Arkansas to dismantle Michigan State’s defense, a pattern Minnesota needs to replicate.

Further evidence is demonstrated in Michigan State’s three ties, in which they were held to less than four shots in each game.

Minnesota’s defense must keep a keen eye on Michigan State’s Camryn Evans and Lauren DeBeau. The two forwards each shot more than 40 shots this season, and more than 50% of their shots landed on net.

Recently, Cesarone has had a lot of success in corner kick situations. Generating and capitalizing on corner kicks can help Minnesota prevail over Michigan State in this lopsided matchup.

The Gophers hope to reproduce the 2018 team’s underdog story as they seek to upset the Spartans on Oct. 30 in East Lansing.

‘Thanks to Illinois for making my dreams possible’ | University-illinois

Rockford celebrates Day of the Dead