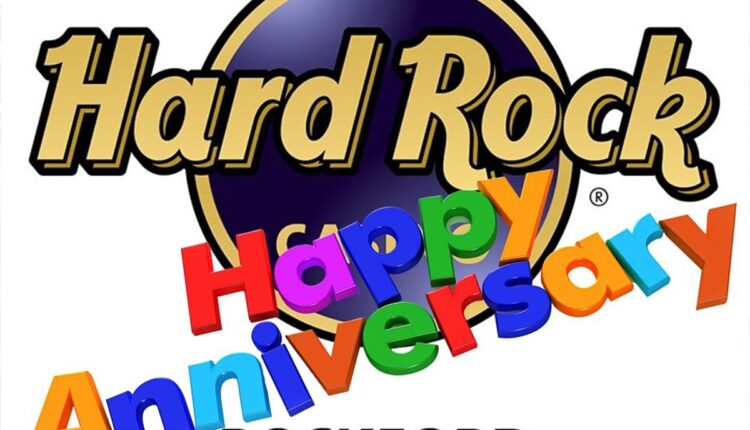 It was one year ago today that a celebration took place in Rockford. It was the official opening of “Hard Rock Rockford – Opening Act.” KMK Media

I was there as Mayor Tom McNamara took the stage and officially welcomed Hard Rock to town. The music was loud, it was a party, but there was no Rick Nielsen of Cheap Trick to be found…But he did send a video message that they played for the people in attendance. Rick always has a way with words.

It’s one-year since Hard Rock Casino Rockford opened its doors, and it looks to be a winner! – KMK Media

Hard Rock Announces Next Step To Prepare For Temporary Casino

Hard Rock Casino Rockford opened the doors of its “Rockford Casino—A Hard Rock Opening Act” one year ago today near the corner of Bell School Road and East State Street in Rockford. The numbers show it’s a highly successful precursor to the permanent casino entertainment complex now underway one mile east on State Street and I-90.

Now that Hard Rock Rockford had officially broke ground on the permanent location, we know that we are months away from a complex that will take the WORLD by storm. Rockford will be home to a Hard Rock Casino, that will feature a 75-foot Rick Nielsen guitar out front, I can’t wait!

But back to the “Opening Act,” this place is amazing!

“The Rockford Casino is an opening act that you don’t want to miss. We are attracting more visitors and greater tax revenue to the State of Illinois and the City of Rockford than we anticipated, from attendance numbers to community relationships, it’s a winner.” – Hard Rock Casino Rockford’s President Geno Iafrate

Check out these mind blowing numbers, from our friends at KMK:

Community involved and making Rockford a priority?? You bet!

“Hard Rock has exceeded our expectations as a wonderful corporate citizen in Rockford. In partnership with the City of Rockford, Hard Rock invested in the short and long-term success of the Rockford Park District plus brought significant and meaningful investment to the BMO Center, Coronado Performing Arts Center, Rockford Promise and the Family Peace Center, all of which make our community a better place for our residents,” – Rockford Mayor Tom McNamara.

Fentanyl in High School: A Texas Community Grapples With the Reach of the Deadly Opioid