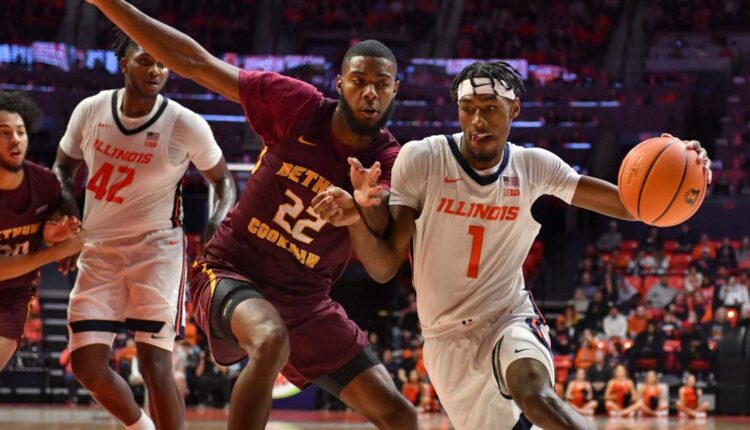 Brad Underwood’s Fighting Illini are looking to get some mojo going, and coming fresh off of a 6 day break, after dismantling Bethune Cookman is a good start. Tonight, the Illini get the chance to crank the dial up a little against a 10-3 Big Ten opponent.

The Illini are in Evanston to face the Wildcats of Northwestern University tonight at 8pm, and leadership will be the name of the game vs the Cats. Unfortunately, the Illini’s most talented assets have also seemed to be the most inconsistent unit as a whole. We have seen great games from Matt Mayer, Terrance Shannon Jr., and Coleman Hawkins, with some flashes from RJ Melendez, but, it has been a rare occasion thus far that the stars align. The Illini’s best games this season vs teams like Texas and UCLA were games where Underwoods leaders stepped up together and played good fluid basketball as a unit that looked well meshed.

What a better time to start than now? Tonight’s matchup vs Northwestern is a big game for the Illini who have really struggled at times during the month of December. As the Illini slowly work towards meshing as a unit, it will also be important that they have some nice games from players who are asked to be leaders. Even if leadership comes from unusual sources, such as a freshman.

Jayden Epps and Sincere Harris have both stepped up and given the Illini some really nice minutes and games this season, and have provided a nice spark at tough times. Even in a 2nd half mashing from Mizzou, Harris was still able to step up and provide a spark, when it couldn’t be found anywhere else on the court or bench. Epps has also shown flashes of potentially being a future star, and when asked Jayden has given Brad Underwood some really nice quality minuets.

Big man Dain Dainja led in the Illini’s last outing the way vs Bethune-Cookman with 22 points, and has been a nice spark for the Illini all season. The big man is extremely athletic, and moves well for such a large stature. Dainja is quickly becoming a hit in Champaign, and could be key in tonight’s matchup vs Northwestern’s 6’9 senior forward Robbie Beran.

The cats have a pair of players that will be vital for the Illini to keep under tabs, and for Illini fans to keep an eye on. Senior Guards Chase Audige and Boo Buie can be extremely dangerous if the Illini don’t really key in on Defense on the perimeter. Both are extremely good shooters, and will hurt you at the 3 point line if allowed to shoot all over you at will, like vs Missouri. Audige is a lengthy scorer at 6’4, 200 lbs, and leads the way in scoring for the Cats at 15.4 ppg. Big man Robbie Beran is a big, athletic forward who is able to be a big scorer in a Coleman Hawkins type role. A great matchup for Coleman, and Dain Dainja to refine themselves against a big man who is a little more tricky with the rock.

The Schedule for Northwestern thus far has had some ups and down for the Wild Cats, but the Illini should find themselves in a more prepared position for this game. The schedule breaks down as followed …

What it means: Illinois should win this game. Other than a really nice win over Tom Izzo’s Michigan State, the Cats have had a hard time playing well vs other Major Conference opponents. With losses to Auburn, Ohio State and Pitt, the Wildcats seem to struggle with size, and the schedule they have played thus far. With a lot of weak spots in between big games for the Cats of Evanston, you would hope the Illini show a more well rounded team.

Illinois size and athleticism will be too much to handle for Northwestern. Brad Underwood has asked for players like Hawkins, Mayer, RJ, and Shannon to step up to the plate. With the Big Ten schedule getting underway, what a better time than now, on your rivals hme court.