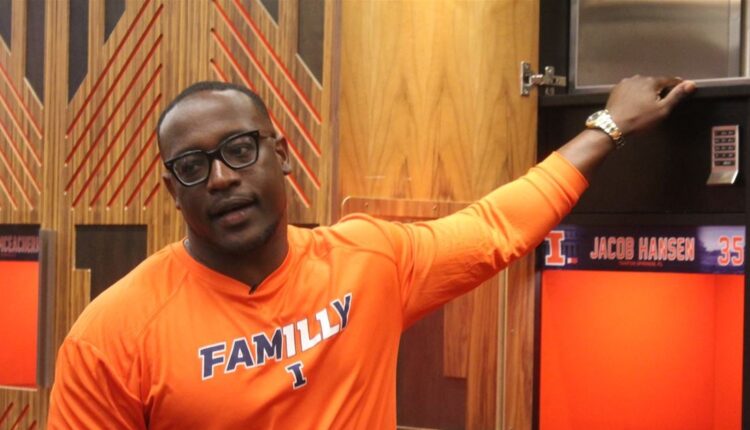 CHAMPAIGN — Illinois head coach Bret Bielema is promoting secondary coach Aaron Henry to be the next defensive coordinator at Illinois, a source told Illini Inquirer. Bielema is expected to tell his team of Henry’s promotion on Saturday.

In two seasons at Illinois, the high-energy Henry helped develop cornerback Devon Witherspoon into one of the top cornerbacks in the nation and a potential first-round draft pick in the 2023 NFL Draft. He also helped Tony Adams to his best season in 2021, which Adams earned a six-figure contract with the New York Jets. Henry has also shown to be one of the top recruiters on the coaching staff, particularly in his home state of Florida.

“He’s just mature beyond his years,” Bielema told Illini Inquirer last year. “He does have the gift, I always kind of say that. There are just some guys who just have a presence factor that you can’t really coach it or teach it, they just have it. Aaron has that gift. He’s going to be an accomplished coordinator, he’ll be an accomplished head coach at some point in his career. He’s got that ability to see through the moment that he’s in.”

An Immokalee (Fla.) native, Henry was a standout player under Bielema at Wisconsin, where he totaled 181 career tackles, 23 passes defended and seven interceptions. As a junior and senior, he earned Second Team and First Team All-Big Ten honors, respectively, and helped lead the Badgers to back-to-back Big Ten championships and back-to-back Rose Bowl appearances.

Kane is expected to leave Illinois after two seasons under Bielema. He was seen as a potential candidate to replace Walters as the Illini defensive coordinator. He grew close with Walters during their time together and was Walters’ eye in the sky during games, relaying information from the press box to Walters on the sideline.

“It’s fun to work with a guy like that,” Kane said of Walters prior to the season. “He’s not just a co-worker. He’s a good buddy of mine, and we’ve grown to be a pretty tight room in general. Our players respond to how he is and then how we are together as a staff as well. He’s done a great job of being a leader in that room.”

Kane, 38, was an FBS coordinator for five years before joining Bret Bielema’s staff as outside linebackers coach and associate head coach.

Kane has a solid resume as an FBS defensive coordinator. During his final two seasons as DC at Northern Illinois, the Huskies had back-to-back seasons ranked in the top-30 of defensive efficiency (26th, 30th), according to ESPN’s FPI. At SMU, his first defense ranked 64th, a good complement to a high-octane offense under Sonny Dykes, though the Mustangs’ defensive efficiency slipped to 85th in his last season before leaving for Illinois. Though, Walters’ Missouri defense ranked 93rd that season before he came to Illinois.

“Ryan is the master of tact,” Illinois outside linebackers coach Kevin Kane said of Walters prior to the season. “He knows what to say, when to say it, how to say it. He does a great job, and obviously, he’s a smart and intelligent individual with what he wants to do with the defense. But his ability to reach our players, relate with them, interact with them yet still hold them accountable is as best as I’ve seen.”

Coleman finished with 42 tackles, 5 tackles for loss and 4.5 sacks while being named All-Big Ten honorable mention. Jacas, a true freshman, was also an All-Big Ten honorable mention and tied for second in the Big Ten among edge players with 13 quarterback hits and ranked sixth in pressures with 34. He totaled 31 tackles, 5.0 TFLs, and 4.0 sacks, tied for the second-most sacks by a true freshman in Illinois history. He was a 247Sports True Freshman All-American and a College Football News True Freshman All-American.

Kane is a Kansas City (Mo.) native and played linebacker at Kansas from 2002-05. Kane has experience recruiting Texas, Illinois, Florida and Missouri.

Towards a just transition in Peoria