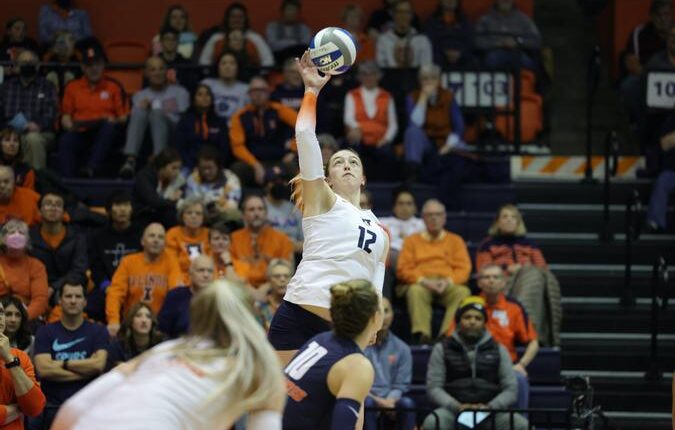 The Fighting Illini improved to 14-13 overall and 9-8 in Big Ten play. Michigan State fell to 11-17 this year and 2-15 against league opponents.

The Illini found themselves down early in the opening set after a 4-0 rally favored MSU, putting Illinois behind 7-4. The Orange and Blue charged ahead with a 4-0 turn that included a pair of aces by Diana Brown putting Fighting Illini ahead, 13-10. Michigan State did not go away quietly with the Spartans retaking the lead following four-straight scores. A service error ended the run, but Michigan State held all the momentum, stringing together a 3-0 run to take the 20-17 edge over the Illini. The Spartans added four-straight points to close out the first set, handing the Illini the 25-20 defeat.

The teams kept the second set close but the Spartans used a timeout with the Illini leading 11-7. A 4-0 rally by Illinois led to the Spartans final timeout with the Orange and Blue ahead 15-9. Illinois looked to stop a 3-0 rally by the opposition with a timeout while still maintaining the 18-15 edge. The Illini built back its lead with back-to-back kills by Raina Terry pushing Illinois ahead 22-18, but MSU creeped within a point, forcing the Fighting Illini to use a timeout. Brooke Mosher recorded a kill to force set point before sealing the 25-22 Illini victory with an ace.

The Fighting Illini held all the momentum heading into the third set and the Orange and Blue held the 15-10 edge at the media break. The team built on its advantage, adding four-straight to lead the Spartans, 19-12. MSU tallied a 4-0 rally late in the set, but the Illini held onto the 20-14 advantage. Another turn for MSU lead to an Illini timeout, clinging into a two-point lead, but back-to-back MSU points tied the match at 22 apiece. The teams went back-and-forth, taking the set into extra points, but Terry gave the Illini set point with a kill before a Michigan State attack error gave the Fighting Illini the 26-24 win in the third stanza.

The Illini posted a 4-0 rally with Jessica Nunge behind the service line to take an early 10-6 lead in the fourth set. Three-straight for the Illini, including an ace by Terry, led to a Spartan timeout with the Orange and Blue ahead, 14-10. After a Caroline Barnes service ace added to the Illini 20-14 advantage, Michigan State burned its final timeout of the frame. A 3-0 turn favored the Spartans, leading to the Illini needing a timeout, but Illinois maintained control and Rylee Hinton’s final kill sealed the 25-18 triumph over Michigan State.

The Illini cap off his home slate with Senior Day against Iowa on Sunday. First serve from Huff Hall is scheduled for 1 pm CT.

The Illini went 3-0 in sets when winning the opening point.

The Illini wore sleeveless white jerseys for the seventh time this season and are now 4-3 when wearing those.

A New Life in a New Land Takes New Book