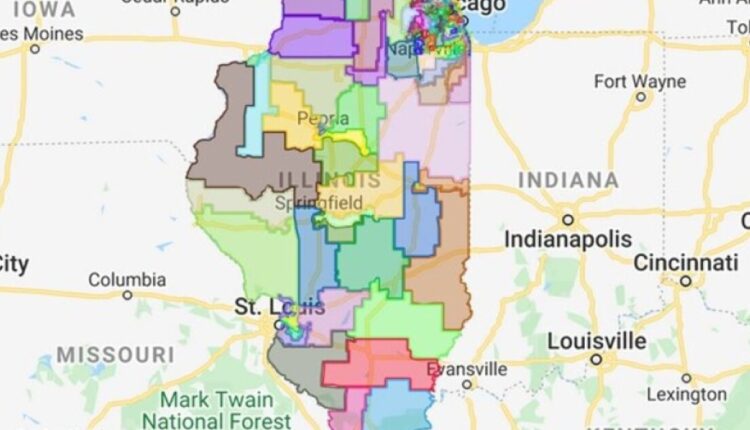 The Census Bureau released the data Thursday, Aug. 12, several months later than usual due to delays caused by the COVID-19 pandemic and other factors.

The numbers show population counts down to the block level, which is what lawmakers need in order to draw districts that are as close to equal in population as possible.

Due to the delays, Democrats who control the General Assembly drew maps using population estimates based on survey data.

Under the Illinois Constitution, waiting beyond June 30 for the official data would have triggered a provision putting the process in the hands of a bipartisan legislative commission in which Democrats could have lost their partisan advantage.

“Just as we predicted, the maps that were drawn by Illinois Democrats in a closed room and without public input, and signed by Gov. Pritzker, have proven to be unusable and unlawful given the release of the US Census data,”

Previous US Supreme Court decisions have held that in state legislative districts, populations can vary by as much as 10 percent between the largest and smallest districts.

Variations below that amount can still be found unconstitutional if they are shown to be discriminatory – either by breaking up minority groups to dilute their voting power, or by concentrating them into too few districts in order to limit their representation.

But variations of more than 10 percent generally have been held unconstitutional.

Republicans are now arguing that based on their analysis, the smallest and largest districts contained in the new maps that were passed this spring and signed into law by Gov. JB Pritzker vary by just under 30 percent – ​​from 92,390 in the 83rd House District, which includes Aurora, to 124,836 in the 5th House District, a narrow, rectangular-shaped district that stretches from Chicago’s Near North Side south to 79th Street on the city’s south side

In June, Durkin and Senate Minority Leader Dan McConchie, of Hawthorn Woods, filed a federal lawsuit in Chicago seeking to have the maps overturned and asking the court either to order the formation of the bipartisan redistricting commission or appoint a special master to draw new maps . A hearing in that case is currently set for Tuesday, Aug. 24.

If the maps are found to be unconstitutional, though, it is not certain that the court would invoke the state constitution’s provision calling for the bipartisan commission.

Democrats could argue that they met the constitution’s June 30 deadline and, therefore, only need to go back and make adjustments to the maps to bring them into compliance.

Democratic Sens. Omar Aquino and Elgie Sims, both of Chicago, the chair and vice chair of the Senate Redistricting Committee, issued a joint statement Monday saying they are still reviewing the census data.

“While we continue to analyze the information released by the US Census Bureau, our commitment to the people of Illinois remains the same: We support a fair map that reflects the broad racial and geographic diversity of Illinois,” the senators said. “As we go through this review process, if it becomes clear that updates need to be made, we will take the appropriate steps to do so.”

Aquino and Sims also indicated they may question the accuracy of the data and the Census Bureau’s use in the 2020 census “differential privacy” – a mathematical technique designed to prevent users from extracting other people’s personal information from the data.

“This has been a unique census, and it’s important we take time to fully understand the data,” they said in the statement.

“This includes the impact of ‘differential privacy,’ which is used by the Census Bureau to protect identities of respondents but may also result in inaccuracies, especially in more ethnically and racially diverse communities.”

Capitol News Illinois is a nonprofit, nonpartisan news service covering state government and distributed to more than 400 newspapers statewide. It is funded primarily by the Illinois Press Foundation and the Robert R. McCormick Foundation.

VE Day, ending WWII in Europe, was May 8

Wall St Week Ahead Battered U.S. stocks may not be bargains as investors brace for inflation data