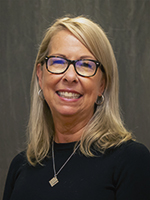 GODFREY – During the Lewis and Clark Community College (LCCC) board meeting, trustees approved the retirement of Chief Academic Officer Jill Lane which will take effect in August.

Lane has served Lewis and Clark as its Chief Academic Officer since 2020. She was Dean of Transfer Programs 2008-2021 and originally came to the college as an Assistant Professor of Speech in 2004.

She also was staff to the Illinois General Assembly as an analyst at the Illinois Citizens Assembly and as staff in the Illinois Governor’s Office as a Budget Analyst for the Bureau of the Budget. She has authored several publications and presented at numerous regional, state and national conferences.

Over the course of her career, she has been involved in many community organizations including the Meeting of the Rivers Museum Foundation Board (2013-present), the Jacoby Arts Center Board of Trustees (2010-2013) and Evangelical Elementary (2004-2015) .

Lewis and Clark President Ken Trzaska said that while he has not known her long, he thanked her for her time at the college.

“I know that she’ll be missed,” he said.

Lane also told the board that The Bridge, the college’s student newspaper, claimed 18 awards at this years Illinois Community College Journalism Spring Conference.

Second place awards included Sports Column – Blazer Beat: Getting Back in the Groove by Nathan Tucker; Page Design for Jeff Vaughn Retires by Kaleigh Grace; News Photo of Mario Kart Tournament by Jacob Reese; Headline for The Inaccessibility of an Accessible Campus by Linsa Dean; Feature Writing for Here Comes the Sun to L&C’s New Garden Show by Lynn McDonald; and Feature Photo for Jeff Vaughn Retires by Kaleigh Grace.

Honorable mention awards included Podcast for When We Get to It by Anthony Brown and staff; News Photo for Pride Club vs Wind: Fall Fest 2021 by Linsa Dean; Front Page Design for Volume 51, Issue 17, Front Page by Megan Lanham; and Feature Photo for Hula Hooping Tori by Linsa Dean.

These sites, including several in Illinois, could soon become national parks | WGN…