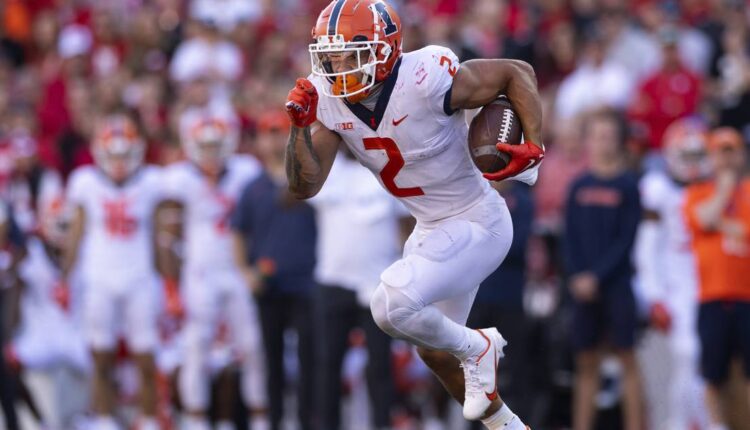 CHAMPAIGN — Illinois running back Chase Brown has decided to skip the ReliaQuest Bowl and enter the NFL draft.

Brown had 1,643 yards rushing this season, tops among the Power Five conferences. He announced his future plans on Twitter on Friday.

Illinois (8-4) is scheduled to play No. 24 Mississippi State (8-4) on Jan. 2 at Raymond James Stadium in Tampa, Fla., in a matchup of Big Ten and Southeastern conference teams.

“Through the highs and lows, my time at Illinois has been the best experience of my life,” said Brown, a junior who started his college career at Western Michigan in 2018. “I earned a degree, advanced as an athlete, and formed lifelong connections.”

Brown thanked his teammates for pushing him and his coaches for believing in him. Hey also thanked Illinois fans.

“Your dedication, passion, and love for this team are greatly appreciated. It has been an honor and a memorable experience to play for you all,” he wrote. “I will always bleed orange & blue.”

Safety Sydney Brown, Chase’s twin brother, announced Saturday that he would be skipping the bowl game and entering the draft, as did safety Devon Witherspoon, a consensus All-American.

Snow Emergencies issued for area counties; What does it mean? – WHIO TV 7 and WHIO Radio