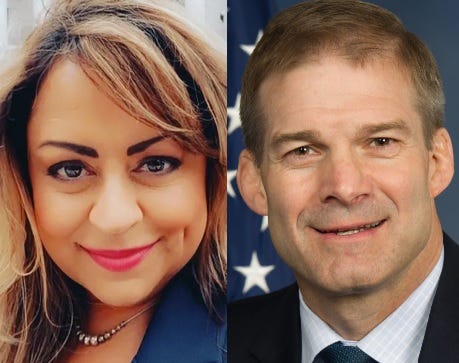 Eight-term US Congressman Jim Jordan is as close to an ally of former President Donald Trump as you’ll find. He has become an icon of conservative Republican ideology who is known for attacking his political adversaries and assailing the Biden administration during frequent interviews on conservative media networks.

His opponent in the newly redrawn 4th Congressional District, which now includes most of Delaware County, is Tamie Wilson, a 50-year-old life and business coach and a political novice who is championing women’s rights, the economy and safety among other issues that affect the district.

In a state that voted for Trump in 2020, in a district that Jordan has held since 2007, unseating the incumbent might appear daunting. But Wilson says that a quarter of the district’s electorate is now in fast-growth Delaware County, and as a resident in the county, she sees that as an advantage.

“I live there. People know me,” she said. “They can tell I’m very much about common sense … that I will help them and improve their lives.”

Election 2022:Ohio House, Senate and Congress districts have changed. What district are you in?

Of course, the district also includes 12 other counties, including Champaign County, where Jordan lives. And even with Delaware County, the new 4th District has a 66.7% Republican advantage, according to Dave’s Redistricting, a popular redistricting website.

Jordan, 58, reflected on the changes to the district, which lost several counties snaking up to Lake Erie.

“You always hate losing people you’ve gotten to know,” he said. “But we’re excited about the new district.”

During a phone interview from his home in Urbana, Jordan was asked about the country’s biggest issues, hyperpartisanship and protecting democracy. Jordan restored Republicans’ agenda of fighting illegal immigration, crime, inflation and energy dependency.

But he also shifted to an attack on President Joe Biden’s two years in office.

“This administration hasn’t done anything right,” said Jordan, co-founder of the House Freedom Caucus, formed in 2015 to be an extreme right-wing block of the House Republican Conference.

Asked about any redeeming qualities of Biden or his policies, Jordan said simply, “There’s nothing positive you can point to in this administration.”

“We went from a secure border to no border. We went from stable prices to a 41-year-high inflation rate. We went from energy independence to a president begging (other countries) to increase production. We went from $2 a gallon gas to $5 gas. And we went from safe streets to record crime.”

Tamie Wilson: Jim Jordan is only ‘there for himself and for Trump’

Wilson said that people have their own issues with Jordan.

“So many people that just do not like him. And everyone has their hot-button with him,” she said.

She rattled off a few: His defense of the attempted Jan. 6, 2021 insurrection; his support of overturning Roe v. Calf; and allegations by several former Ohio State University wrestlers who were groped and fondled by now-deceased Dr. Richard Strauss in the 1980s that he, as an assistant wrestling coach, knew about the abuse but ignored it.

“(Former wrestlers) will call me crying on the phone and the fact that he didn’t help them,” she said.

She said that as a life coach, she has the skills to make positive change.

“I have talked to many people who are unwanted and unloved,” she said. “With my background, I have the skills and abilities and knowledge to present the programs and policies to make America better.”

She says Jordan’s approach is to bully and that “he’s there for himself and for Trump. He’s not there for the people.”

Wilson says that Jordan’s combative politics are what’s wrong for Washington, where political and ideological gridlock are rampant. She points to his opposition to the CHIPS and Science Act that provides subsidies and tax benefits to companies that build and design semiconductors in the US, including Intel, which is pursuing a $20 billion project in Licking County.

Jordan star could rise if GOP retakes control of Congress

Jordan cites his ongoing friendship with former Ohio Congressman Dennis Kucinich as an example of working well with adversaries.

“I’m willing to work with anybody for what I think is good for the country,” he said.

From his home in Cleveland, Kucinich, an eight-term Democrat from 1997 to 2013, Jordan called “straight-forward, no-nonsense, and with no pretensions in a town that’s very pretentious.”

“He grasps the aspirations of a constitution who feels left out,” Kucinich said. At the same time, he said, “There are things we don’t agree on, to put it lightly.”

Kucinich said cooperation from both sides is needed more than ever.

“If we don’t find a way to connect with people on a human level, we don’t have a chance. If we are only partisan, and no reconciliations, the country is in trouble.”

Jordan counters: “You can’t work with people who want to call you names and want to try to cancel you.”

Asked if he would retaliate by opening investigations into Biden, his family and the Jan. 6 Committee, Jordan said, “We’re going to do it aggressively, in a way that is consistent with the Constitution.”

Perhaps Wilson’s strongest contrast with Jordan is her concern over Trump supporters in Congress and their allegations of a stolen election. She said Jordan “stokes fear, hate, chaos and division.”

Jordan calls Trump “one of the greatest presidents we’ve ever had.”

Jordan has disregarded a subpoena to testify before for the Jan. 6 committee investigating the insurrection. And he was one of several Republicans who voted not to certify Biden’s 2020 victory.

Wilson said her priorities are rule of law and putting people first.

“Your first responsibility is to support the Constitution. I’m about the people. I’m not about the party.”

Will there be a debate between the two candidates prior to the election?

Jordan said he is open to debate Wilson, just as he has his opponents “in every single election we’ve ever had.” However, Wilson said that the incumbent’s campaign has been unwilling to schedule a debate.

Drivers in Decline: A Shortage of Volunteers Complicates Access to Care in Rural America