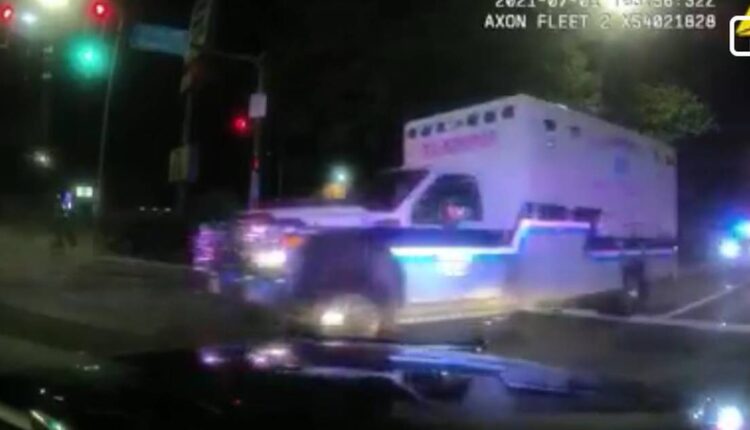 A Joliet man pleaded guilty to stealing an ambulance from a hospital.

McCall signed a contract and consent form to participate in the Will County drug court program. The program provides treatment, counseling and other services to people convicted of nonviolent crimes with the goal of reducing recidivism.

The contract stipulated McCall must pay $1,000 in restitution to the Wilmington Fire Protection District. The ambulance belonged to the fire department.

McCall is scheduled for a court hearing May 11 regarding the status of his drug court contract.

Shortly before 1:30 am July 1, officers went to Ascension Health Saint — Joliet for a report of a man who stole a Wilmington Fire Department ambulance from the hospital’s ambulance parking bay, Joliet police Sgt. Dwayne English said.

Image from a Joliet police squad video of a chase involving a stolen ambulance on Thursday, July 1, 2021. An officer responds to a driver whose car was struck by the ambulance. (Joliet Police Department)

Officers attempted to pull the ambulance over when McCall refused to stop, English said, which led to a chase.

“McCall lost control of the ambulance and rolled over the guardrail on the north side of the roadway and crashed into a ditch near Interstate 55,” English said.

McCall fled from the ambulance on foot but he was quickly apprehended, English said. Both McCall and the driver whose vehicle was struck by the ambulance were hospitalized with minor injuries.

Wilmington Fire Chief Tim Zlomie said the ambulance was taken when it was parked in the emergency room ambulance parking area “after delivering a patient to the hospital.”

“As ambulance crew personnel were preparing to leave the hospital and return to the ambulance, a subject entered the ambulance and drove off,” Zlomie said

During a bond hearing following McCall’s arrest, Will County Assistant State’s Attorney Thomas Bahar noted that between 2001 and 2014, McCall was convicted of vehicular hijacking, aggravated battery, retail theft and possession of a stolen motor vehicle in Cook County. McCall also had a theft conviction in Champaign County in 2003.