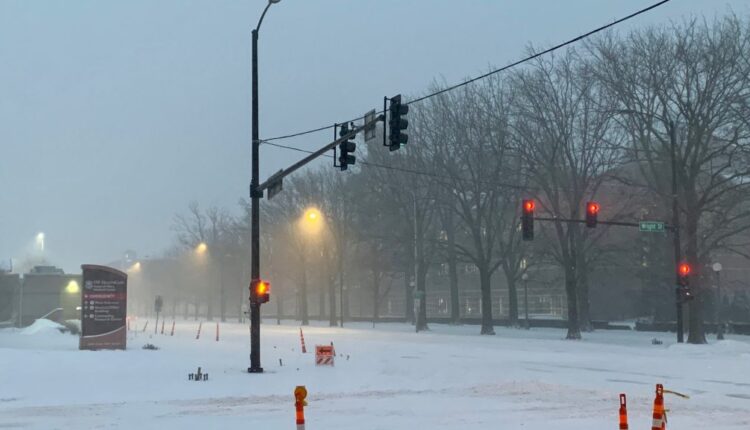 Illinois Public Media is tracking a winter storm system. Forecasters expect it to bring heavy snow to Central Illinois on January 24 and 25. This story will be updated with posts from Chambana Weather meteorologist Andrew Pritchard and the National Weather Service. Delays, closings and school remote days are being updated here.

[10:30 PM Update] Snow will overspread the region overnight with the heaviest developing along the Interstate 70 corridor where 1″/hr rates will occur between 5-9 AM CST leading to poor visibility and slippery travel. #ILwx pic.twitter.com/N6Sgwoprvv

Update on onset timing of precipitation tonight…precipitation starting to move into southeast IL as of 10 pm. #ilwx pic.twitter.com/WXQ7AEYhQG

Parkland College: all campus roads, classes, programs, offices, and services are canceled or closed on January 25.

Urban Park District will open two hours late on January 25. All park district facilities will be open at 10:00 am

Urbana School District 116 says there will be no rural bus routes and no before-school child care on January 25. The administration will decide whether the district will have a remote learning day at 5:00 am Click here for the district’s full message.

Decatur Public Schools says there will be no school for students on January 25. All athletic and school activities are also canceled. This ‘snow day’ will be made up at the end of the year.

Lake Land College in Mattoon has announced it will be closed on January 25.

meanwhile, University of Illinois Urbana-Champaign Chancellor Robert J. Jones says the campus will remain open and classes will meet as usual on January 25.

the Village of Savoy has declared a winter weather emergency. During this declaration, no parking is permitted along designated snow routes.

University High School at Urbana will have a remote learning day on January 25.

From the IDOT: The Illinois Department of Transportation is warning the public that winter weather will affect much of the state this evening through Wednesday, creating slick and slippery conditions, with some areas expected to receive up to 9 inches of snow. To prepare, IDOT as usual will have its snow-and-ice teams pretreating roads and bridges as necessary, with plowing operations ongoing throughout the storm and continuing in the days afterward. IDOT encourages you to check current road conditions at GettingAroundIllinois.com. You also can follow IDOT on Facebook and Twitter.

Here is a timeline of winter weather impacts from late tonight through Thursday. #ilwx pic.twitter.com/qws8rryJtd

No changes to our winter weather headlines were made this afternoon.

A Winter Storm Warning remains in effect for our counties east of I-55 with a Winter Weather Advisory along/west of I-55 from 9 pm tonight through 6 pm Wednesday. #ilwx pic.twitter.com/SSZZdIzSoP

Danville District 118 Schools will be going remote Wednesday, January 25, due to the winter storm forecast. Students will have Chromebooks and supplementary learning materials to participate in remote learning from home.

Meteorologist Andrew Pritchard says snow will be heaviest in the early morning until noon with total accumulations of 3 to 5 inches.

Wondering when it will start snowing in your area? Here is a rough estimate of onset times starting tonight. Precipitation will initially start as a rain or rain/snow mix near & south of I-72 before transitioning to snow. #ilwx pic.twitter.com/CZ4oCpsgJz

Champaign County/east-central Illinois: No major changes to tonight/tomorrow snowfall. Expect heavy, wet snow to onset around or a little after midnight. Snow becomes heavy at times through Wed morning.

We are one of the many @NWS offices across the country being impacted by this strong storm system. Check out the expansive area of ​​winter weather headlines as of this morning. ❄️

Further south and east of here, strong winds and severe storms are forecast with this system. #ilwx pic.twitter.com/vpPPGJJSY4

A WINTER STORM WARNING goes into effect at 9 PM Tuesday and lasts until 6 PM Wednesday. In Champaign County, I expect snow to begin falling very close to midnight on Tuesday night/Wednesday morning. Snow becomes heaviest during the morning hours on Wednesday… pic.twitter.com/JgUQJFrCpV

Accumulating snow is expected across the area late tonight into Wednesday. The heaviest snow appears most likely east of I-55, which is where a Winter Storm Warning is in effect. #ILwx pic.twitter.com/n9rxr1BJfO

Snow will begin late tonight and cont thru Wed. The heaviest snow will fall from midnight to noon on Wed, with travel impacts to the Wed AM commute expected. Light snow will cont Wed night through Thur w/ minor accumulations possible. #ILwx pic.twitter.com/7XYX95eXey

A winter storm will bring accumulating snow late Tue night – Wed. The highest snow amounts look to be east of I-55, which is where a Winter Storm Watch is in effect. Difficult travel is expected, esp for the Wed AM commute. Now is the time to plan for travel impacts! #ilwx pic.twitter.com/lYrjyTijpr

Accumulations and locations of the heaviest snowfall are still in question; however, there is a 50%+ chance that areas east of the Illinois river will see over 4″ of snow. Areas east of I-57 have a 50%+ chance of seeing 6+” of snow. #ILwx pic.twitter.com/O4nzeCprpY

A winter storm will impact the area late Tue night-Wed. Heavy accumulating snow appears most likely east of I-55, which is where a Winter Storm Watch remains in effect. Here is a look at the winter storm severity index that shows moderate impacts over east & southeast IL. #ilwx pic.twitter.com/Hfun8eYZLK

We haven’t had much snow so far this winter, but that looks to change come late Tue night – Wed when a winter storm impacts parts of the area. Here are some items that are useful to have in your car ahead of winter weather. #ilwx pic.twitter.com/75zgcQc9FZ

The week gets off to a quiet start across central Illinois, but snow moves into the region late Tuesday night and lasts into the day on Wednesday. Snow may be heavy at times on Tues PM / Wed but battling warm air as it moves in, some will likely melt as it falls… pic.twitter.com/ZfMnm8yXrx

Prepare your home and vehicle for the upcoming winter storm. Since the storm is several days away, continue to monitor the forecast for updates. Also, remember the difference between a winter storm watch and a winter storm warning. #ILwx pic.twitter.com/uR2bb6JtFx