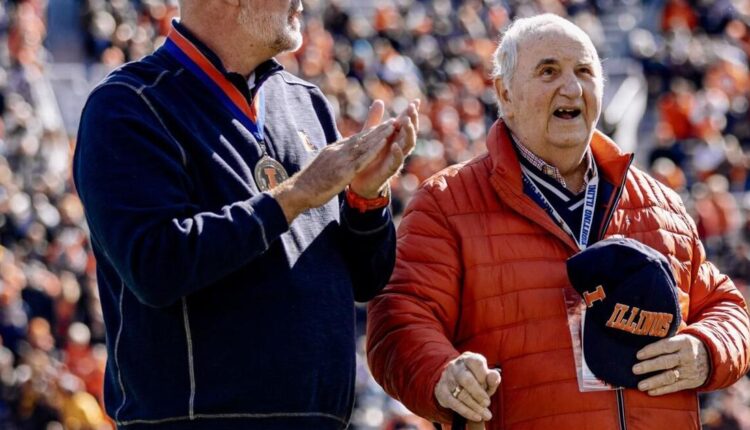 Jim Fessler has been a mainstay at Illinois football games since 1970.

The longtime season ticket holder and University of Illinois graduate will add another bowl game to his list when he travels to Tampa for the ReliaQuest Bowl on Monday.

“I think it’s a combination of just the excitement of a great season, celebrating a great season and then they’re usually in pretty good destinations,” Fessler said ahead of what will be his eighth bowl game.

“I remember going to the Sugar Bowl, and we went to a New Orleans cooking class and you know, you go to the great restaurants in New Orleans and those kind of things. So celebrating a great season with the team and then just a good destination (that is) fun to discover and fun to be there with members of your Illinois family.”

He’ll pass through Tennessee on his way south to catch up with his stepson, Ryan Baise, a former Illinois quarterback who was on the roster when Illinois met USC in the 2008 Rose Bowl.

“I have always said in my life that my most proud Illini moments were watching my son walk across the stage in 2011 and getting his diploma (and) run out of the locker room wearing the, the Illini helmet and uniform at the ’08 Rose Bowl,” Fessler said, adding that a third proud moment was receiving the 2022 Lou Liay Spirit Award with longtime UI public address voice Gene Honda.

Baise can’t make it to this year’s game with two young kids in the fold, leaving Fessler to meet up with old friends for the game.

Instead, Fessler will attend with some friends, kicking off a week of catching up with old pals and soaking up some warm Florida sunshine.

The Illini-themed getaway is fitting for Fessler, who has been attending Illinois football games since 1970. He estimates he’s missed about a dozen home games since becoming a season-ticket holder in 1976.

“It looks like the university and the ReliaQuest Bowl have some fun events planned,” said Fessler. “Then I’m planning on heading south for about three, four or five days to meet some more friends and play a little golf and get out of the cold a little bit here.”

MY PRIMARY ACT OF FAITH