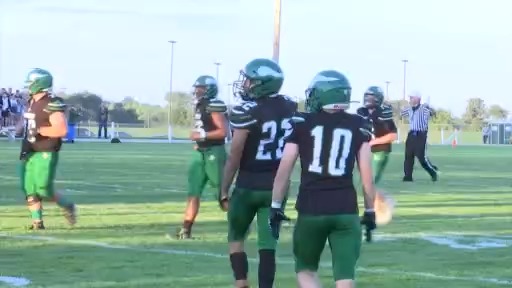 From the kickoff, Chris Doetch receives and blazes through the Crusaders special teams for a nice kickoff return to the 20.

Vikings are going for 4th down and 20 at the 33, Chandler Alderman is going to find Julian Rodriguez for the catch, but they come up short by 2 yards, it’ll be a turnover on downs.

Crusaders have the ball at the Vikings 25, Kyng Hughes hands it off to David Ballard. He runs and spins for a powerful 13-yard gain and the first down.

Later in the drive, Crusaders are knocking on the door and guess who, Kyng Hughes sneaks in through his lineman to get the touchdown.

For highlights watch the media player above.