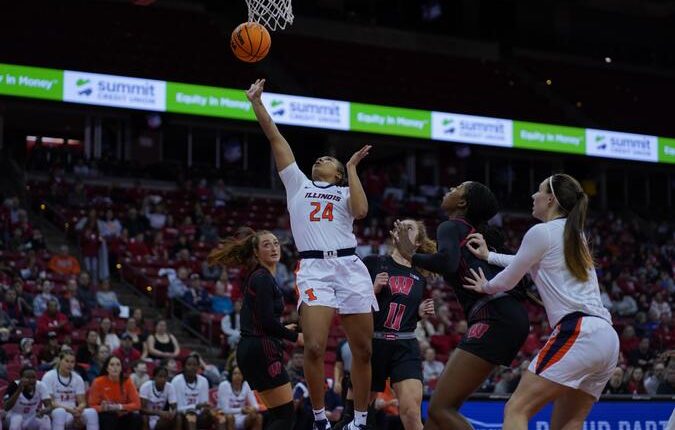 MADISON, Wis. — Adalia McKenzie and Makira Cook dominated from start to finish in Illinois’ emphatic 79-63 win over Wisconsin on the road on Thursday night.

McKenzie scored a career-high 26 points in the victory, while Cook tallied 23 points following her two-game absence.

The Illini sit above .500 in conference action for the first time since 2017, and they extend their winning streak to five games in their final game of 2022. Illinois now sits at 12-2 overall and 2-1 in Big Ten play heading into 2023

Illinois shot a season-high 95.7% at the free-throw line, with McKenzie leading the way with 15 free-throw attempts. The Illini also commanded the boards, outrebounding the Badgers, 37-28, and 10-6 on the offensive glass.

Illinois knocked down its first four shots of the contest, using three 3-pointers during that stretch to take an early 11-4 lead. The Illini shot 75% from deep during the opening 10 minutes and led by three, 21-18, heading into the second quarter.

After a back-and-forth first quarter, Illinois opened the second frame on a 9-2 run to take a double-digit lead with seven minutes to play in the half. The Badgers pulled within one before the Illini used a 6-0 run to extend their advantage to seven points, with Kendall Bostic grabbing the 500th rebound of her career during that time.

Illinois eventually took a 38-32 advantage into the break, led by McKenzie’s 10 points, her 12th double-figure scoring performance this season.

The Illini got into a groove to open the second half, opening the third quarter on an 11-3 run. Six straight points from Genesis Bryant, bringing her to double figures, while that stretch pushed Illinois’ advantage up to 14 less than four minutes into the frame. Ahead by as many as 17 in the third quarter, the Illini led by 12 with 10 minutes to play.

McKenzie and Cook took over in the fourth quarter, combining to score all 19 of the Illini’s points in the frame. After Wisconsin cut its deficit to single digits, an 11-2 Illinois run pushed the visitors’ lead to a game-high 18 points. Closing the game on a 4-1 run, the Illini secured its 12th win of the year in its final game of the calendar year.

Now 12-2 overall and 2-1 in conference play, Illinois returns home to take on No. 12 Iowa on New Year’s Day, with tipoff scheduled for 2 pm at State Farm Center on Jan. 1.

Celebration of life set for Senator Scott Bennett in Urbana

Fentanyl smuggling done by US Citizens, not immigrants or asylum seekers