More than 5,800 graduating from University of Missouri this weekend 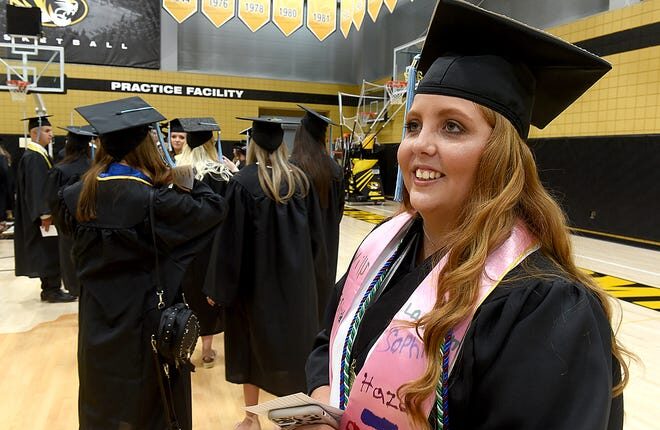 Lily McFarland had mixed feelings Friday as she prepared to graduate from the College of Education and Human Development at the University of Missouri.

“I’m ready, but sad,” she said inside Mizzou Arena.

“I’m sad to leave all my friends from different states,” said McFarland, from St. Louis.

She doesn’t have a job lined up, but she’s returning to St. Louis where she’s confident in finding a job.

Maya Boyd, of Kansas City, is the first in her family to graduate from college.

“I’m excited,” she said. She wants to be teaching in Kansas City.

Alyssa Blumenshine, of Bloomington, Illinois, has her first teaching job in the Dallas area.

Asked to describe her time at MU, she said: “It’s been amazing.”

Also among those graduating in the ceremony was Serenity Washington. She is already working as a teacher in Columbia Public Schools, a product of the CoMo Ed program to recruit minority teachers from among high school students.

She wore an elaborately decorated graduation cap with the words: “She chose her path and God ordered her steps! So let the adventure begin. She has a big heart and is ready to shape little minds.”

She will teach fourth grade at Parkade Elementary School.

The ceremony marks the hard work and dedication of the graduates, said Chris Riley-Tillman, interim dean.

“Has anybody been celebrating already or are you just starting now?” Riley-Tillman said as a cheer rose from the students. “You didn’t actually need my permission to celebrate.”

Riley-Tillman introduced college faculty, with some receiving more applause than others.

“I know who’s getting raises this year,” Riley-Tillman said, referencing the applause.

It was the first of 17 scheduled MU graduation ceremonies this weekend.

Robbie Wallace, 21, is receiving a bachelor’s degree in personal financial planning. The Dacula, Georgia, student graduates at 8:30 am Saturday with the College of Agriculture, Food & Natural Resources in Mizzou Arena.

Becoming a certified financial planner will require taking a certification exam, he said.

Since 2019, he has interned in the MU News Bureau. He has enjoyed getting to know university officials and news bureau personnel during the internship, he said.

He will have family traveling from Georgia to celebrate graduation with him, he said.

He has a job lined up at Veterans United Home Loans upon graduation, he said.

Heimberger, who graduated from MU in 1989 with a bachelor’s degree in biology, develops therapies for treating brain cancer patients and seeks to find a cure. She will received her honorary degree during the School of Medicine graduation at 11 am Saturday in Jesse Auditorium.

Rogers develops advanced, low-cost technologies to improve the health of vulnerable patients around the world. He was honored during the College of Engineering ceremony at 4 pm Friday in Mizzou Arena.

Traffic will be heavy this weekend on Stadium Boulevard near Mizzou Arena and on campus.

Roger McKinney is the education reporter for the Tribune. You can reach him at [email protected] or 573-815-1719. He’s on Twitter at @rmckinney9.

Things to do in Rockford this weekend

Rockford IceHogs | IceHogs and Wolves Meet for Game 2 of Central…