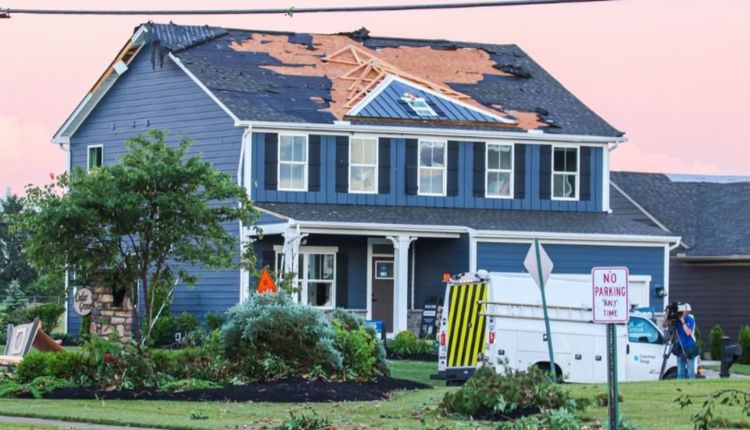 The National Weather Service is releasing their damage surveys as four tornadoes have now been confirmed in the Miami Valley from Wednesday night’s severe weather. The newest confirmed tornado is in Champaign County where an EF-0 twister touched down near Urbana.

In Darke County, an EF-1 tornado was confirmed. NWS said the tornado “touched down in open farm fields to the west of Schnorf-Jones Road, and immediately intensified and hit a farm, heavily damaging barns and outbuildings. The tornado continued east and crossed Red River-West Grove Road where another farm was struck with roof damage to several barns. The tornado lifted in a field east of Highway 49.”

NWS said this tornado traveled 2.5 miles and had an estimated maximum wind speed of 100 mph.

In Clark County, the tornado surveyed was consistent with an EF-0 when it was initially down in western Clark County, but strengthened to an EF-1 tornado as it continued east. While moving east, it also widened to nearly 200 yards.

“Hundreds of trees were snapped or uprooted along this section of the path and several homes suffered damage due to partial uplift,” NWS said.

The tornado then crossed into the Springfield Country Club and uprooted dozens of trees.

As it continued east, NWS said damage was observed at Buck Creek State Park, where several trees were uprooted along the main drive.

In total, NWS said this tornado had a path of 17.1 miles and had an estimated maximum wind speed of 90 mph.

A third tornado has been confirmed to have touched-down in the region during Wednesday’s tornado outbreak, according to the National Weather Service.

Survey teams have also ruled an EF-2 tornado touched-down in Miami County, causing the damage to the Meijer distribution center near Tipp City. An EF-1 tornado was also ruled as being the cause of damage near Springfield.

An EF-1 tornado touched-down north of Springfield and caused damage in parts of Clark County, an NWS spokesperson said in a public information statement.

The final assessment of the tornado, which would include the maximum wind speed and distance on the ground will be released later Thursday.

This is the second confirmed tornado, after an EF-2 twister touched-down in Miami County near Tipp City, according to the NWS survey teams.

Multiple survey teams will be in the area including in Miami, Clark, Darke, and Champaign counties during the day today.

The National Weather Service has ruled an E2 tornado touched-down and caused damage near Tipp City during Wednesday’s severe weather.

“The National Weather Service office in Wilmington OH is currently conducting a storm survey for the area near Tipp City in Miami County Ohio and has determined that damage near I-75 was caused by a tornado with at least an EF2 rating,” an NWS spokesperson said in a public information statement.

The final assessment is still being completed and will be released later on Thursday. The assessment will include the maximum wind speed and length of the tornado.

The National Weather Service will conduct storm damage surveys in multiple parts of the region after severe weather Wednesday.

The NWS confirmed a tornado happened in Miami County near West Milton and Tipp City from 5:55-6:15 pm

Details, such as the intensity of the tornado, will be available after the surveys are conducted, an NWS spokesperson said in a public information statement.

NWS said they also believe additional damage is believed to have been caused by tornadoes but are working to confirm this with storm surveys over the next few days.

They will be conducting surveys of damage in the following areas:

NWS said they are still receiving damage reports and will continue to develop a plan to survey damage.

They ask anyone who has observed any weather-related damage to report it to them on social media or by calling 937-383-0031.

We will update this story as more information about the surveys is available.

[10:48 PM] After today’s storms, we plan on conducting damage surveys in the coming days.

We can confirm a tornado occurred in Miami County, Ohio. Others likely occurred as well and will be confirmed when able.

KHN’s ‘What the Health?’: Taking a Shot at Gun Control