Proposal aims to save Bell Bowl Prairie from airport project 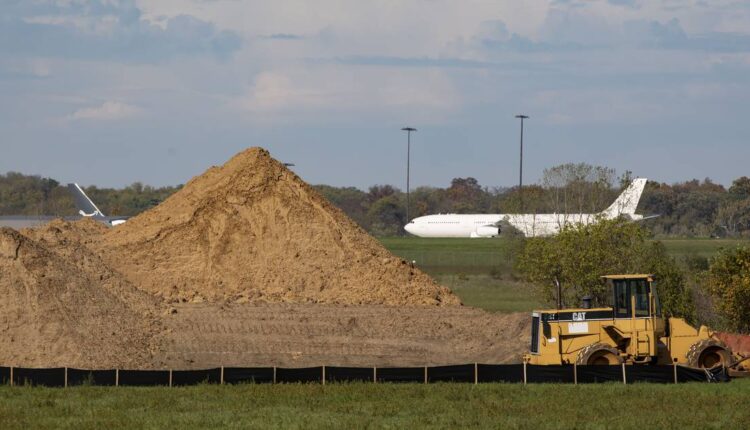 The battle to save the ancient Bell Bowl Prairie in Rockford — home to the endangered rusty patched bumblebee — has included everything from foot-long yellow-and-black bee cutouts stuck to the gate of Gov. JB Pritzker’s Gold Coast mansion to a federal lawsuit.

Now, environmentalists, organized under the banner Save Bell Bowl Prairie, are making an offer they’re hoping their opponents can’t refuse.

They want the Chicago Rockford International Airport, which plans to drive a road through the heart of the prairie, to redesign a $50 million expansion project, moving the road and preserving high-quality foraging ground for the high-profile bumblebee.

The airport stands to benefit, the environmentalists say, because Illinois Sens. Tammy Duckworth and Dick Durbin have agreed to support an application to pay for the redesign with federal appropriations funds. But the federal money isn’t guaranteed, according to Kerry Leigh, a leader of the environmentalist coalition and executive director of the Natural Land Institute. And the airport would have to apply.

Still, she said, the potential upside is exciting.

“It’s a huge win-win — for the airport and for us,” Leigh said. “Everybody gets what they want.”

The airport, which owns the 14-acre Bell Bowl Prairie, has agreed not to do any construction there before Oct. 15, according to Amy Doll, director of Friends of Illinois Nature Preserves. The airport also agreed to wait for state and federal assessments of the effects on endangered species, neither of which have been completed.

In other recent developments, US District Judge Iain Johnston dismissed a Natural Land Institute lawsuit on Aug. 31, according to the environmentalists. The judge ruled that the prairie is not in immediate danger and that the court lacks jurisdiction, according to a statement from the Nature Land Institute’s lawyers.

The lawsuit was dismissed without prejudice, environmentalists said, meaning they are free to file another lawsuit if the prairie faces a more immediate threat.

The environmentalists have long argued that there’s a way to meet the airport’s needs without damaging the 5-acre heart of Bell Bowl — one of the last remaining places in Illinois where prairie exists much as it did 8,000 years ago, and a foraging ground for the federally endangered rusty patched bumblebee.

But in recent months the environmentalists have honored that argument.

In July, they received the results of an engineer’s report, performed by Geosyntec Consultants in Oak Brook.

The report found that by combining alternatives laid out in an earlier government assessment of the airport expansion, the airport could avoid disturbing the 5 acres of pristine prairie and minimize disruption of the entire 14-acre prairie. The report suggested moving a 1 million-square-foot cargo building east, away from the most valuable section of prairie, and switching to an eastern or southeastern road location.

The report noted potential objections, including a higher rate of expected crashes under the proposed redesign, but suggested possible remedies such as a lower speed limit or innovative de-icing techniques.

During the yearlong debate over the fate of the prairie, environmentalists and their supporters have launched protests and contacted lawmakers. High school students in Pontiac, Illinois started a Bell Bowl Prairie project. At a recent tree-planting on the Southeast Side of Chicago, a neighborhood activist showed up with a hand-painted “Save the Bell Bowl Prairie” sign.

“There are people who care about this all over the state,” said Doll.

She expressed frustration that the airport had declined to pursue mediation or discuss possible solutions directly with environmentalists. She also complained about a lack of public meetings on the topic.

“This isn’t how democracy works,” Doll said. “Our elected and appointed officials have an obligation to make transparent, open decisions.”

Leigh said she’s very excited about the proposed “win-win” approach, in which the airport would apply for federal funding for a redesign protecting the heart of the prairie.

“That’s the carrot,” she said. The stick is that the Natural Land Institute is prepared to file another lawsuit calling for a halt to construction.

“We’re prepared to hold this up for a long time,” Leigh said. “And it just seems smart business to get this money coming into Rockford, do the redesign, and get moving on the project.”