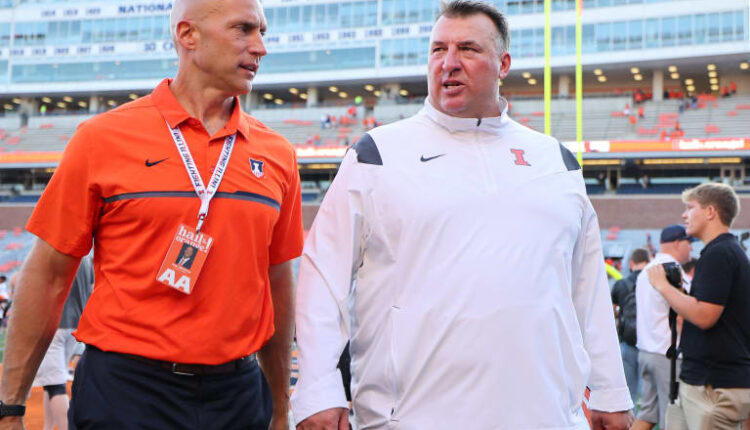 CHAMPAIGN – Not long into his tenure as the athletics director at his alma mater, Josh Whitman dropped a hashtag on the folks in orange and blue.

It was both a promise and a long-term goal, perhaps a bit of wishful thinking, too. But for a former Illini tight end who had pride pumping through his veins, Whitman knew it would take some rebuilding.

On his first day on the job, he jettisoned football coach Bill Cubit, covered his salary, and went with an out of the box hire in Lovie Smith, the former NFL coach who was looking for work. In the ashes of a program imploded by the misguided hire of Tim Beckman, Whitman’s first move was decisive but not overly successful. When he finally made the decision for another direction, he went with a Big Ten guy.

Bret Bielema has the Illini competing for a New Year’s 6 bowl game, a Big Ten West title, and the elusive sellout.

Whitman took time in removing John Groce, then landed Brad Underwood after other names fell off his list.

Two seasons into a roster overhaul, the Illini set a school record with 21 losses in a single season. The climb was slowed by COVID, but the Illini won the conference tournament title and a regular-season title in the last two years. Despite a roster makeover and staff mutiny, Illinois basketball keeps chugging along.

Congrats, Josh. You’ve done a great job in lifting Illini athletics out of the mediocrity (or worse) of the last decade or so. It’s time to give the guy a pat on the back.

“It’s pretty exciting,” Whitman said earlier this month. “I’m really proud of where we came from. I’ve said however many times in the many years leading up to this that when we start to achieve the level we expected, it would be that much sweeter knowing where we started. I hope our fans feel that way. I know I feel that way. I know the people on the inside of the programs have felt that way.

“We just have to every once in a while take a moment and appreciate where we are and what we’re doing. Just a moment. We have a lot more work to do. There’s human nature that can see in. You have to be very disciplined in the way you think and the way you work. You have to guard against that (let down).

“Keep the pedal down and stay aggressive. Make sure we take advantage here where we took all of that time to get to this place. Now, in the moment of this time, we have to take full advantage of this opportunity. Use it as a springboard of what’s to come.”

This is rarified air for the Illini, who find themselves in the top 25 in both football and men’s basketball in the same week for the first time since 2002. The Illini are No. 18 in the football poll and will begin the year ranked No. 23 in basketball.

It’s a sweet moment for Whitman, the former scholar-athlete who took over a mess left by Mike Thomas, the AD who made terrible hires, blew through the money left him by Ron Guenther and buried the Illini in such a toxic mess only the EPA could appreciate.

Sure, there’s still work for Whitman to do. He’s got a massive debt hanging over the department, an unreal number north of $330 million with a service debt that’s crippling, not to mention the unknowns such as the transfer portal and NIL that could turn the college sports industry on its head.

This year, we’re centered around the idea of ​​competing for championships. We’ve won a lot of games in intercollegiate athletics and the University of Illinois. We haven’t won as many championships as we should, as we aspire to.

With conferences looking to consolidate and perhaps eliminate the weak links, this is a challenging time for an AD, but Whitman has guided his top two revenue sports back into position where they can help the department build some revenue and perhaps help finance the next projects.

The horseshoe in Memorial Stadium needs replaced. The stadium’s east side looks more like Red Grange’s era than Juice Williams or Chase Brown, and there’s always work to keep up with the Joneses in a league where programs like Ohio State just keep printing money with full houses each fall Saturday.

Of course, the Illini must prove they can truly awake the fan base and fill Memorial Stadium. Underwood has raised conference banners, but he’s yet to lead the Illini to the second weekend and the Sweet 16 in March Madness.

But for the moment, let’s celebrate where the Illini have climbed and how far they have come.

“We’ve all been around when things are good,” said Whitman, even if that’s been 10, 15 or 20 years ago. “We all understand the atmosphere it brings to campus and the community. It’s exciting to feel the sense of enthusiasm that’s pervading around the community right now.”

When coaches make $4 million plus and basketball assistants get over $500,000, this is big business and cut-throat competition. When a rival watches Tim Anderson and Chester Frazier snag blue-chippers, they’ll want to take a swing at them, throw them big money and see what happens.

Orlando Antigua and Chin Coleman were two respected assistants who left for Kentucky, and it won’t be the last recruiting trip for Illinois’ successful recruiters in basketball or football.

“The marketplace has continued to accelerate,” Whitman said. “We have to continue to be aware of the market. We have to be prepared to do what we can to maintain our position. When people are looking to create new staff, we have to be ready and proactive.”

Whitman already has the next step in mind.

“This year, we’re centered around the idea of ​​competing for championships,” Whitman said. “We’ve won a lot of games in intercollegiate athletics and the University of Illinois. We haven’t won as many championships as we should, as we aspire to.”

Whitman has the Illini on the right track, and he doesn’t plan on slowing down.

As Links to MS Deepen, Researchers Accelerate Efforts to Develop an Epstein-Barr Vaccine