Robots roam at UI’s $3.9 million ‘Farm of the Future’ | University-illinois 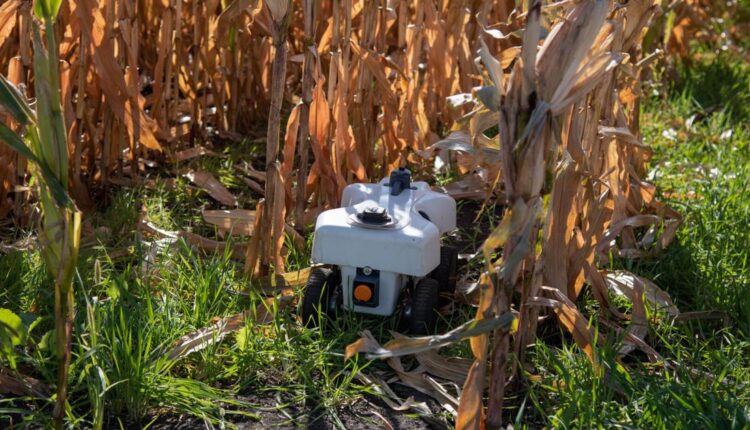 URBANA — Between rows of corn near Curtis Road and Race Street sprouts bright-green cereal rye, planted by an autonomous robot.

Earlier this fall, University of Illinois researchers remotely steered a four-wheeled device through the cornfield as it skittered seeds across the ground. The seeds grew into cereal rye, a cover crop, which can capture unused nitrogen from the soil and prevent erosion.

This is the I-FARM, a freshly-funded 80-acre testbed for digital agriculture technologies.

A UI-led research team earned a three-year, $3.9 million grant from the US Department of Agriculture’s National Institute of Food and Agriculture this year to explore the role that precision robotics and sensors could have in the future of sustainable farming.

“This is just the first year, so we’re still getting the foundation,” said Naveen Uppalapati, research scientist for the project. “But there’s an opportunity here to show these digital technologies on a much larger scale, on a production-level setting.”

The I-FARM proposal was the sole recipient of the highly competitive “Farm of the Future” grant from NIFA in May 2022. Its investigators come from a variety of academic backgrounds — computer science and crop science, economics and animal science.

The autonomous robots used for the project are products of EarthSense, a Research Park startup created in 2016 by Girish Chowdhary, an associate professor of agricultural and biological engineering. Chowdhary is the I-FARM’s principal investigator.

There’s the new four-wheel cover cropping robot, controlled via tablet, that spins out seeds loaded through its lid. And “TerraSentia,” a smaller robot equipped with high-resolution cameras that specializes in capturing the phenotypes, or traits, of surrounding crops — their heights, leaf area indexes, stem widths and more.

In the first five months post-grant, I-FARM researchers have tested out other devices to measure soil moisture and used a variety of cameras, including one fastened to an aerial drone, to visually track the crops’ growth.

With the help of colleagues at Tuskegee University, the I-FARM team plans to add livestock to the mix as well, and use sensors to track the animals’ health.

Once researchers add internet connectivity to the farm, they plan to track a number of soil health and nutrient measurements in a single dashboard viewable through the “MyFarm” app.

Besides testing the digital farming techniques, researchers are charged with finding the potential selling points — and barriers — for farmers to use this technology. Coming soon: An Illinois Extension training course designed to acquaint farmers with the ins and outs of these ag devices. “I-FARM University,” Uppalapati called it.

All of the digital techniques are designed to be “scale neutral,” or adoptable for farms of any size.

This focus “can provide a solution to the worsening labor crisis for small farms and improve the sustainability of large and spatially heterogeneous farms,” Chowhardy said after the grant was awarded.

What to know about C-sections