Rockford alderman will return from Army training days before primary 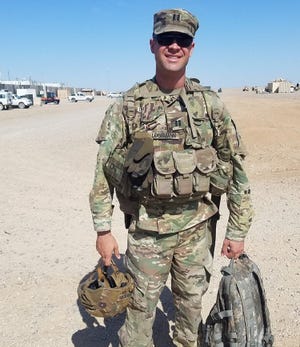 ROCKFORD — Duty calls and the timing couldn’t be much worse for someone with aspirations of joining Congress.

Candidate for the 17th Congressional District, Jonathan Logemann, 35, will report this month for 11 days of annual training with the Illinois Army National Guard. The call comes weeks before the June 28 Democratic primary.

“I don’t have any control over when training events are scheduled,” Logemann said. “I am very proud to serve in the Illinois Army National Guard and when duty calls, you have to go serve whether it’s good timing or bad timing for your life or whatever you have going on.”

Logemann is Rockford’s 2nd Ward alderman, a high school teacher and a soldier who enlisted in the National Guard in 2012. Service is what he says all those things have in common, but it will disrupt his campaign to succeed US Rep. Cheri Bustos in Congress .

When he returns days before the primary election, Logemann said the primary campaign would be like a “heavy sprint” to the finish.

An infantry commander, Logemann was forced to temporarily give up his Rockford City Council seat for more than a year when his National Guard infantry unit was called for active duty in July 2019. His unit was deployed in Afghanistan as part of Operation Freedom’s Sentinel where he served as a logistics officer with the rank of captain.

He reclaimed his City Council seat in September 2020 after returning home.

Logemann said that while he is away for training, members of his team and volunteers will keep his campaign going.

“We have been having to plan and prepare for this for quite some time,” Logemann said. “It would be good to have that time to reach out to voters, but ultimately I have got to fulfill this duty.”

Logemann plans to continue to serve in the National Guard which typically requires a two-week commitment annually if elected. Others, including U.S. Rep. Adam Kinzinger, R-Channahon, remained a member of the Air National Guard after being elected to Congress.

The Shame Of Pride Month