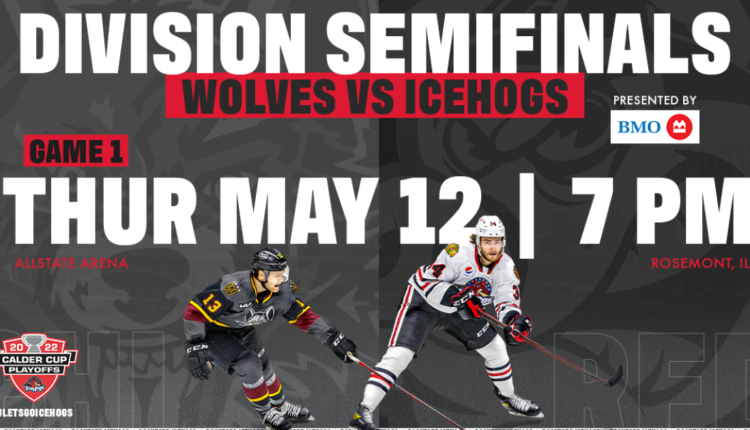 Rosemont, IL Tonight the IceHogs will make the short drive to Rosemont, IL to open the Central Division Semifinals against the Wolves at Allstate Arena at 7:00 pm in a best-of-five series.

This series marks the third time the IceHogs and Wolves meet in the postseason after colliding in 2008 and 2018. After dropping the first two contests in 2008, the IceHogs rattled off wins in Games 3-5 before the Wolves fought back to take Game 6 and Eventually Game 7 for the series victory. In 2018, the IceHogs and Wolves connected in the best-of-five Central Division Semifinals, sweeping their in-state rivals out of the postseason with a thrilling triple overtime 4-3 win, the longest game in IceHogs history (117 minutes and 22 seconds).

IceHogs goaltender Arvid Soderblom stopped 69 of 70 shots faced over 121 minutes of action in two games against the Texas Stars to help send the IceHogs to the Central Division Semifinals. The Goteborg, Sweden native made 33 saves in a 2-1 Game 1 victory and earned his first AHL postseason shutout with 33 saves in a 1-0 win in overtime in Game 2.

Despite the Wolves’ Central Division Title, the IceHogs challenged them all season long. This year, the IceHogs went 8-3-0-1 against the Wolves, including a 5-0-0-1 record at Allstate Arena, with seven of the 12 meetings decided by one goal. IceHogs Rookie of the Year, forward Lukas Reichel, led the IceHogs and the season series with 15 points (5G, 10A).

The IceHogs and Wolves will face off again on Saturday, May 14 at Allstate Arena for Game 2 of the series. Game 3 will be played the following day on Sunday, May 15 at 4:00 pm at BMO Harris Bank Center. If necessary, Game 4 will also be in Rockford on Tuesday, May 17 at 7:00 pm and Game 5 will be back in Rosemont on Thursday, May 19 at 7:00 pm

Watch and listen to all the IceHogs 2022 Calder Cup Playoff action on the IceHogs Broadcast Network presented by BMO Harris Bank! Tune in from your favorite device, at home or on the road at IceHogs.com and on the IceHogs app! Fans can also watch every IceHogs home game and select road games this season on 23.3 Circle TV and every game on AHLTV and listen in on all of Mid-West Family’s local stations including 104.9 The X, B103, 95.3 The Bull, and Rockford Greatest Hits 100.5 and featured on Rock River Current.

IceHogs vs Wolves, all time