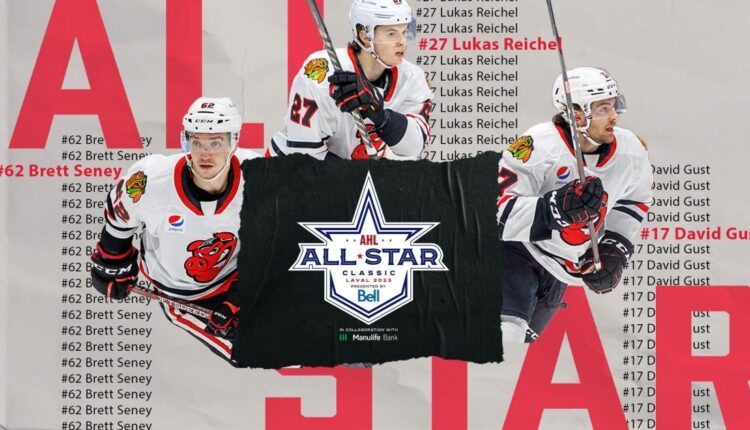 Reichel, 20, is in his second professional season in North America and his second with the IceHogs. Through 32 games with Rockford this season, the Nurnberg, Germany native has racked up 36 points (14G, 22A) and is currently tied for seventh in league scoring. After scoring the overtime winner against the Texas Stars on Jan. 3, Reichel was recalled to the Chicago Blackhawks in the National Hockey League where he has three points (1G, 2A) in three games. The young forward set a single-season rookie scoring record with Rockford during the 2021-22 campaign by amassing 57 points (21G, 36A) in 56 games.

Seney, 26, earns his first All-Star honors in his fifth full professional season and his first with Rockford. The 5-foot-9 forward has terrorized the Central Division and beyond by publishing 38 points (14G, 24A) in 32 contests thus far. At the time of the announcement, Seney is tied for third in league scoring. Along with Reichel, Seney was recalled to Chicago on Jan. 3 and has played two games with the Blackhawks this season. The London, Ontario native has been a model of consistency since the start of the season with Rockford and has not gone more than two consecutive games without a point. He was particularly lethal during a week-and-a-half long stretch spanning from Nov. 23 to Dec. 2 in which he posted 10 points (3G, 7A) and three multi-point efforts across four games.

Gust, 28, is recognized as an All-Star after tabbing 37 points (18G, 19A) through the first 34 games of the schedule. The league honors are the first of his career, and they come amidst a breakout season for the Orland Park, Illinois native. Gust has already surpassed his previous career high of 36 points (16G, 20A) that he set last season en route to a Calder Cup with the Chicago Wolves. The forward’s 37 points this season rank him sixth in league scoring, and his 18 red lights are tied for third most in the AHL. The sixth-year pro has five multi-goal games under his belt so far this season, including hat tricks on Dec. 13 vs the Iowa Wild and Dec. 28 vs the Grand Rapids Griffins. Gust has also recorded three games of at least four points during the current campaign, including a five-point night (2G, 3A) on Oct. 28 vs the Manitoba Moose.

Reichel, Seney, and Gust are the first players to represent the IceHogs as All-Stars since goaltender Kevin Lankinen at the 2020 AHL All-Star Classic in Ontario, California. No All-Star Classic was held in the 2020-21 or 2021-22 seasons due to the COVID-19 pandemic.

The trio have led the IceHogs to a 3.56 goals for per game average, ranking eighth-best in the AHL. Combined, Reichel, Seney, and Gust have totaled 111 points (46G, 65A) and have accounted for 33.1% of Rockford’s total scoring.

Only two other teams, the Syracuse Crunch and the Toronto Marlies, also sport three All-Stars in the 2023 AHL All-Star Classic.

This is just the second occasion in team history in which three IceHogs have been selected to an All-Star Classic. Jake Dowell, Ryan Hartman, and Michael Leighton all represented Rockford at the 2016 AHL All-Star Classic in Syracuse, New York.

The AHL’s All-Stars will be divided into four teams, one representing each of the league’s four divisions, for the 2023 AHL All-Star Challenge on Monday, Feb. 6. The teams will participate in a round-robin 3-on-3 tournament featuring six games of 10 minutes each. The two teams with the best records at the end of the round-robin will face off for the championship, a six-minute game also played at 3-on-3.