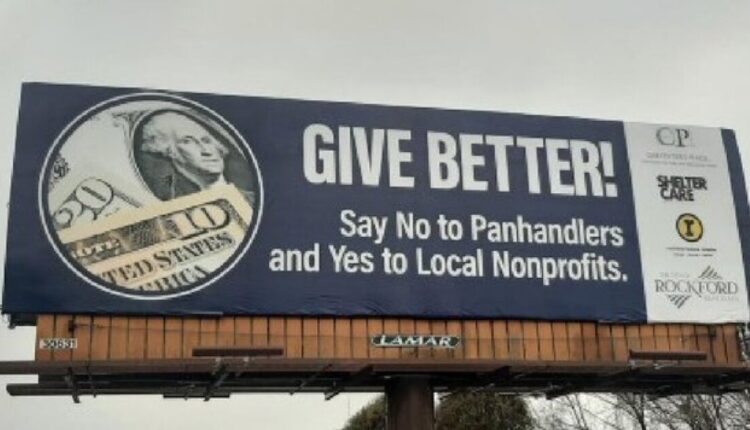 Cities across the country wrestle with reducing the number of people asking for money on their streets citing a concern for traffic and public safety. Rockford Mayor Tom McNamara says he hopes the billboards will move residents likely to donate by panhandlers to put their money elsewhere.

“If you’re providing the money out there, they’re going to continue to stand on the corners and ask for those dollars. And we know that many of them are certainly not homeless.”

The billboards say ‘Give Better! Say No to Panhandlers and Yes to Local Nonprofits.’

McNamara was not clear when asked how the city is measuring the effectiveness of the billboards. According to an invoice from Lamar, the billboard company, provided to WNIJ, the billboards are part of campaign costing nearly $11,000 and is scheduled to end by mid-February.

“We’re trying multiple avenues,” McNamara said. “All of them have varying levels of success. We’re not naïve in thinking a billboard alone will do it.”

He said part of the city’s efforts include allocating more than $2 million towards reducing homelessness.

He said members of the city’s Health and Human Services Departments reach out to people experiencing homelessness and those who are panhandling and offer to connect them to services in the community.

The public’s reaction to the billboard campaign has been mixed on social media, with some comments asking the city to reduce panhandling through an ordinance instead of public shaming.

On the city’s Facebook page, a post with a picture of the sign generated support through thumbs up, but also comments such as “Shameful to plaster this. Who approved this display of non-compassion?”

An Illinois law banning panhandling was ruled unconstitutional in 2021 since it violated freedom of speech under the First Amendment.