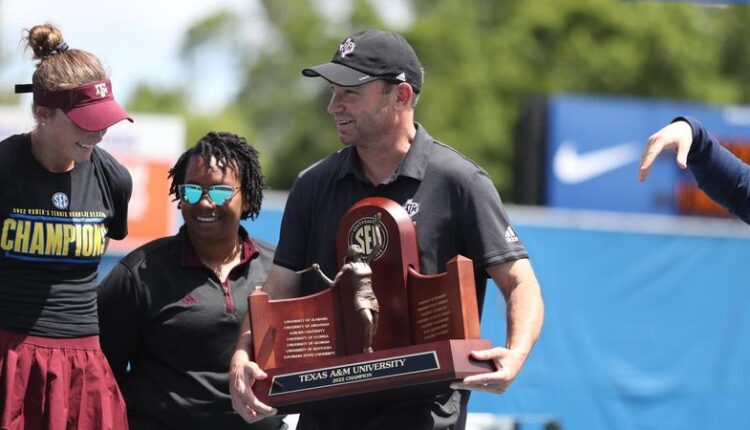 The Maroon & White started the 2021-22 campaign ranked No. 14 in the ITA preseason rankings and was picked to finish second in the SEC by the league’s coaches. The Aggies registered a program best overall record of 33-2, going 27-1 in the regular season and 13-0 in SEC play.

Texas A&M continued to be unbeaten against league foes when it claimed hard-fought SEC Tournament contests against Vanderbilt (4-2) and Florida (4-3) to earn a spot in the championship match.

Mimicking the 2021 finals, the Aggies faced the defending champs, No.3 Georgia. To open the match, doubles pair Jayce Goldsmith and Tatiana Makarova beat Morgan Coppoc and Ania Hertel, 6-4, and Carson Branstine with partner Mary Stoiana defeated Mell Reasco and Meg Kowalski, 6-3. Locking up the tournament title for the Aggies were Makarova, Goldsmith and Stoiana who defeated their opponents in singles to secure the first SEC Tournament championship in program history.

After going untouched in SEC play and winning the SEC Tournament, the Aggies headed into the NCAA Championships as the No. 7 seeds. The Maroon & White topped Texas A&M-Corpus Christi, 4-0, and Baylor, 4-1, at Mitchell Tennis Center to start NCAA play. Staying at home for the Super Regional, the Aggies faced an SEC rival for a spot in the Elite Eight. A&M defeated Vanderbilt for the third time on the season, putting on another dominant performance against the Commodores with a 4-0 sweep.

The Aggies’ magical run came to an end in Urbana, Illinois, with a loss to No. 2 Oklahoma in NCAA Championship quarterfinal action. A&M fought back after dropping the early doubles points with Stoiana, Goldsmith and Gianna Pielet giving A&M a chance, but ultimately the Aggies came up short, falling 4-3, concluding their historic 2021-22 campaign.

The trio of Branstine, Goldsmith and Makarova garnered ITA All-American recognition. Branstine finished with a 17-9 overall singles record, including a 14-7 mark against nationally ranked opponents. Goldsmith and Makarova earned their second All-America honor as a tandem, finishing the 2021-22 campaign with a 35-7 mark, including a 15-5 in ranked action.