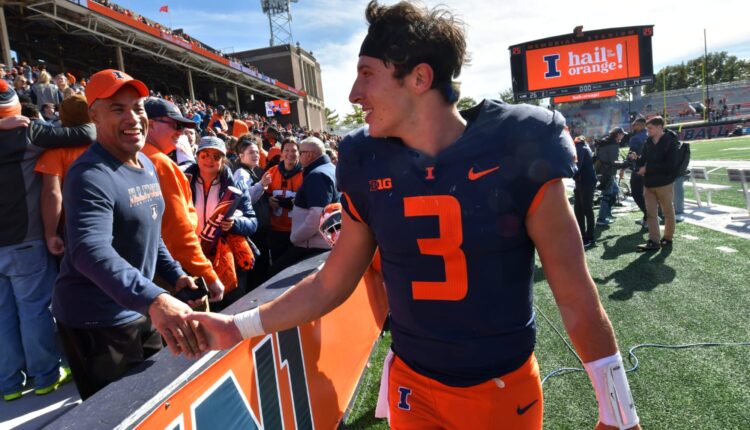 Tommy DeVito officially announced Thursday that he is declaring for the 2023 NFL Draft.

DeVito, the transfer quarterback who came to the Illini in 2022 to take the reigns after spending four years at Syracuse, is officially leaving the Illinois program. He announced his decision Thursday afternoon, nearly two weeks after playing in 13 games for the Illini and going 8-5 as the team’s signal-caller.

Thank you. Thank you to my teammates who embraced me from the first day I arrived in Champaign,” DeVito wrote. “The bond and memories we made in 1 year will last a lifetime and was a blessing to go play with you each week. Thank you to Coach Bielema and Coach Lunney for pushing me to be the best me each and everyday and putting me in the best situation to help the team win. Thank you to everyone who works in the faculty who has helped make the program go round and made it feel like a home. Last and certainly not least, thank you to the amazing fans for supporting myself and embracing my family during this amazing year.

What does Tommy DeVito mean to Illinois football?

DeVito is one of the best Illinois quarterbacks in recent team history. He helped lead the Orange and Blue to a ReliaQuest Bowl appearance and was one of the most efficient passers in the Big Ten, as he finished with 2,397 yards while tossing 15 touchdowns and maintaining a stellar quarterback back rating of 142.3.

The most efficient DeVito performance came in Week 8 when Illinois traveled to Lincoln to take on the Nebraska Cornhuskers.

After an inconsistent first half, the Illini regrouped and saw DeVito finish 20-for-22 with 179 yards and two scores, while also gaining 37 yards on the ground. Illinois prevailed 26-9 just before Halloween.

Although Illinois came up short in the postseason, DeVito kept every game competitive and allowed one of the nation’s best defenses to go to work. That’s all you can really ask for.

DeVito will forever be a legend in Champaign and will be greatly missed. Onto the next chapter, no. 3.