Trayce Jackson-Davis dominates as Indiana blows past Illinois, 80-65, in Champaign 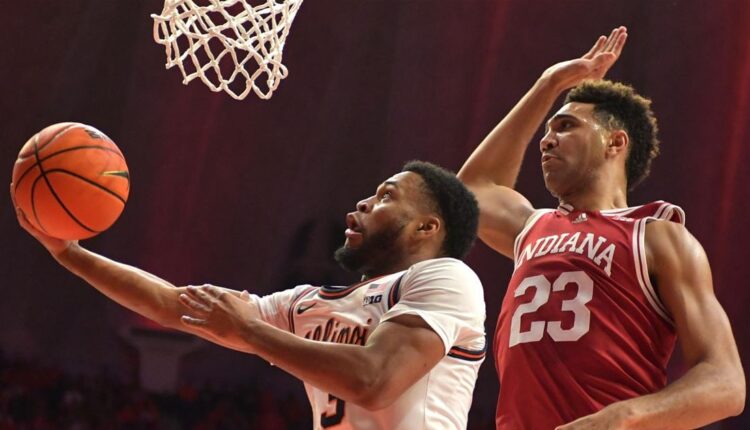 Indiana preseason All American Trayce Jackson Davis Dominated Illinois on Thursday night, scoring a season-high 35 points with nine rebounds, five assists and three blocks as the Hoosiers (12-6, 3-4) blew out the Fighting Illini, 80-65, at the State Farm Center in Champaign, Illinois.

Illinois had no answers for Jackson-Davis all game, allowing the star senior forward to shoot 15-of-19 from the field and score all but five points inside the paint. Starting frontcourt mate Jordan Geronimo helped to lead the charge, scoring all 13 of his points in the first half, while adding eight rebounds and three blocks in 30 minutes. Starting backcourt duo Jalen Hood-Schifino other Trey Galloway scored 10 and 11 points, respectively.

For Illinois, it was the Terrence Shannon Jr. show as the Illini lived and died by his team-leading 26 points on 8-of-18 shooting. Only one other Illinois player scored in double figures, with RJ Melendez tallying 10 points and four rebounds in 22 minutes off the bench. Coleman Hawkins other Dain Dainja each scored nine points and combined to grab 13 rebounds.

Despite the late tip-off time inside a hostile road environment, Indiana looked like a team that simply wanted the win more, and it showed from the opening whistle. Whether it was shooting 66% from the field in the first half, feeding Jackson-Davis in the post on nearly every possession, and getting meaningful minutes from several bench players, the Hoosiers proved they meant business against the Illini.

And it was with that heightened intensity and urgency that allowed Indiana to build a 19-point first-half lead after just 15 minutes of play. No matter the two timeouts called by Illinois’ Brad Underwood in the first half or the adjustments made coming out of those breaks, seemingly nothing could slow down the Hoosiers.

At the root of Indiana’s first-half success, which saw it go on a 14-1 scoring run in the opening seven minutes, was an emphasis on getting to the rim and dominating the paint. Jackson-Davis and Geronimo were terrific playing alongside each other, combining for 26 points in the first half on a perfect 12-of-12 shooting, and Illinois having few answers for the frontcourt duo.

Aiding Indiana’s 10-point lead at halftime was the playmaking of Hood-Schifino, who entered the intermission with 10 points, two assists, two rebounds and two turnovers. The freshman’s opportunism on the fastbreak and IQ in the half-court put Illinois’ defense in several precarious situations throughout the half.

However, if there was any one area that became a glaring blemish for Indiana, it was its ball security. In just the first half, the Hoosiers coughed up 10 turnovers and allowed Illinois to cash in with nine points off the turnovers. For the game, Indiana finished with 17 turnovers which stalled several runs that could’ve put the game out of reach much earlier.

At halftime, Indiana saw its 19-point lead cut down to 43-33 as Illinois showed signs of life in the final four minutes. A 15-6 scoring run, capped off by Melendez’s emphatic dunk and last-second 3-pointer, brought the pro-Illini crowd to its feet after the first 20 minutes.

Entering the second half, the Hoosiers firmly knew they still had a long way to go to pull out the road win, even despite the double-digit cushion. But with every scoring stretch and spurt that Illinois attempted to mount, Indiana had an answer at every turn, and it started with Jackson-Davis’ domination.

Jackson-Davis set the tone early, scoring Indiana’s first seven points out of halftime and eventually playing 18 of the final 20 minutes to ensure Illinois never got too close. Illinois never went away from its one-on-one defense against Jackson-Davis, either, which allowed the preseason Big Ten Player of the Year to score almost at will around the basket.

Following in Jackson-Davis’ footsteps, the Hoosiers went on a 19-6 scoring run to start the second half and saw its lead balloon to 62-41 following a 3-pointer from Miller Kopp (6 points, 3 steals).

Though the Illini remained persistent for the remaining 12 minutes, the 21-point margin was too overwhelming to overcome. Even after forcing the Hoosiers into three-straight turnovers using a full-court press midway through the second half, Illinois’ offense didn’t ratchet up enough aside from Shannon.

A 9-0 spurt from the Illini, capped off by a 3-pointer from Shannon, cut Indiana’s lead to 66-54 with 7:48 to play. However, any ideas of a comeback were quickly squashed as Galloway scored a pair of transition buckets in less than 30 seconds to effectively put a stop to the run.

The 12-point difference was as close as Illinois would get for the remainder of the game as Indiana’s defense put the clamps on the Illini for the remaining seven minutes and change. Illinois finished the game shooting just 38.7% from the field and 42.9% from 3-point range, while converting an abysmal 9-of-23 free-throw attempts.

Both teams subbed in the end of their benches in the final minute as the blowout victory was already in hand for Indiana — its’ second-straight double-digit triumph over a Big Ten foe.

With the win, Indiana improves to 12-6 overall and 3-4 in conference play. Up next, the Hoosiers host Michigan State at Noon ET on Sunday afternoon in Bloomington.