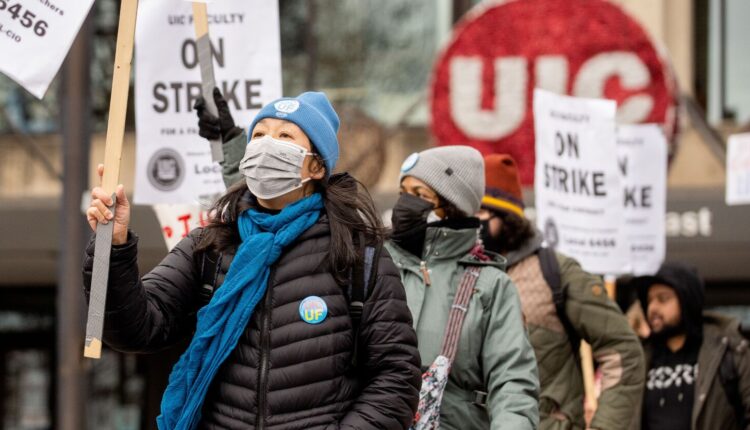 Classes resumed Monday at the University of Illinois Chicago after faculty and administrators reached a tentative contract agreement and suspended the strike that upended operations last week.

News of a four-year deal brought a sense of normalcy to the Near West Side campus, which was buzzing with students. The scene was a stark contrast from the prior week in which a four-day walkout canceled classes for thousands of students and saw demonstrations held across campus.

Faculty were less visible Monday than students who were happy to be back in class.

“I’m excited to see how the rest of the semester goes with my classes,” sophomore Faith Aslam said as she left the UIC student center. “Because I do enjoy all of my professors … And I would love to keep building a relationship with them … It would be hard if it was all online, or all of us were just teaching ourselves at home.

“I’m sure being a teacher, being a professor is not easy at all,” said Aslam, who is studying psychology and political science. “So I think they had every right to ask for more for the work that they do. … It was really upsetting to see that it took so long to reach that agreement and finally get what they deserved.”

A date has not yet been set for members of the UIC United Faculty union to vote to ratify the agreement, but union leaders announced emphatically around midnight late Sunday into Monday, “We won! Strike suspended!”

“This contract contains important gains on the issues most important to our members,” faculty union president Aaron Krall said in a statement.

The deal ending the faculty union’s second strike in nine years began to fall into place on Friday after administrators responded to union demands to increase minimum faculty salaries sooner and to put more money into annual raise pools.

“The parties were able to find common ground on an overall contract that addresses various faculty concerns and bridges the gap in compensation offers,” UIC leaders said in a statement.

“However, there may be challenging financial times ahead that will require further collaboration with our faculty, staff and administrative leadership to control or reduce costs, as well as improve the retention and graduation rates of our students, to enhance the financial stability of the institution .”

The agreement came after nine months of bargaining and 34 negotiation sessions, about half involving a federal mediator. Professors have been working without a contract since August.

The strike had students scrambling to learn on their own just as the semester began, and it highlighted long-simmering issues on the Near West Side campus.

Enrollment there has grown significantly in recent years, just as other campuses have faced declining student numbers. The faculty’s last contract agreement was reached in 2019 just before members were scheduled to walk out.

Several UIC students reported all or nearly all of their classes were canceled during last week’s strike, although the union was unable to say what percentage of classes were canceled. But the campus remained lively all week, with faculty picketing and holding rallies every day. Students and local politicians, as well as representatives from national labor and education organizations, joined demonstrations on behalf of faculty.

Student mental health had also emerged as a key and unprecedented bargaining issue. In that area, the talks led to a commitment from the university to create a mental health care plan for students with input from faculty members and students. UIC administrators also agreed to a faculty demand to establish free mental health and learning disability assessments for struggling students. These commitments are not included in the faculty’s contract.

“The academic labor movement is on fire right now,” said Irene Mulvey, president of the American Association of University Professors, who flew from Boston to join the UIC picket line. “We’ve had decades of disinvestment at the federal and state level … [Higher education] is at a breaking point And I think the answer is faculty organizing.”

Mulvey said the UIC strike is pivotal for the higher education labor movement because of the university’s majority-minority student body and its status as the only “R1” research-intensive public university in Chicago. Ensuring that universities like UIC pay salaries that recruit and retain strong faculty is essential, she said.

University administrators did not move much on minimum salaries until after the strike began. On Friday, their offer increased from $54,500 to $58,140 for non-tenure track faculty in the first year of the contract. These faculty make up almost half of UIC’s teaching force in the union and earn less than tenure-track faculty despite often having similar credentials and workloads.

“Four days into a strike, they are finally getting serious,” Charitianne Williams, the faculty union’s spokeswoman said at the time.

The majority of faculty make above the minimums. Average annual salaries for non-tenure track faculty are $83,300; for tenure-track faculty the average is $134,000, according to UIC officials.

The strike raised questions about the university’s financial priorities as well as its commitment to transparency.

The faculty union demanded higher minimum salaries that reflect historic inflation and the cost of living in a big city, as well as the additional labor professors have taken on as a result of increased student mental health challenges.

But up until the end, university administrators said they did not have the financial resources to improve their offer on salary minimums. As recently as Friday, the university cited a $9.2 million gap between the union’s three-year compensation proposal and the university’s “fair and fiscally responsible four-year offer.”

“Our faculty, our students are the heart and soul of this institution,” UIC Interim Chancellor Javier Reyes said on Friday. “We value them and care for them so deeply, as well as for every person who works at UIC, to fulfill our mission as an institution. But at the same time, we have financial constraints, we have finite resources.”

The faculty union had disputed this claim, referencing the university’s cash reserves. According to a union-commissioned analysis of federal data, the university had $1 billion in cash reserves as of 2021. Reyes said that amount covered all three University of Illinois campuses as well as UI Health, and included some restricted funds

“I don’t want to refer to $1 billion because it’s not factually correct,” he said.

That’s unlike practices at other higher education institutions like the California State University system, which makes public the individually audited financial statements for all 23 of its campuses.

“It’s definitely something to ask at the system level,” Reyes said about the lack of campus-level data. “We are part of a system, so we follow those guidelines from our president and board of trustees.”

Unique to this strike was a focus on student mental health, which experts said is emblematic of “bargaining for the common good.” It is a type of labor organizing that moves beyond compensation and benefits and brings social conditions into contract talks.

“There are ways in which negotiating for improved mental health conditions for students … can affect the real working conditions of faculty, which makes them appropriate for being in a bargain contract,” said Tim Cain, a professor at the University of Georgia who studies campus unionization. “But it also might point to these larger goals of modern higher education unions, where it’s not just about my working conditions, but it’s about improving the whole.”

Faculty sought higher compensation to reflect the extra time they’ve invested to support students impacted by mental health challenges. And they also asked the university to provide free psychological and neuropsychological testing for struggling students, which is already provided at Urbana Champaign.

UIC administrators responded by saying that faculty contracts were not the place to address student mental health, though they ultimately committed outside the contract to some of the union’s demands.

“We have to make sure that we find that exact strategy that will help our campus holistically,” Reyes said last week. “It cannot be part of one negotiation … because we know that that is impacting our whole campus. And as such, we’re making a commitment as a university … and saying that this is a start.”

On the eve of the strike, the university said it would commit nearly $4.5 million over six years to enhance student mental health services, by increasing staffing at the counseling center and enhancing salaries to recruit and retain staff. The union said it wasn’t enough.

According to a national survey of college students called the Healthy Minds Study, 6 in 10 met the criteria for at least one mental health diagnosis after the onset of the pandemic.

UIC serves about 34,000 undergraduates, most of whom are students of color. One in three undergraduates is a first-generation college student.

Things to do this weekend in the Rockford area