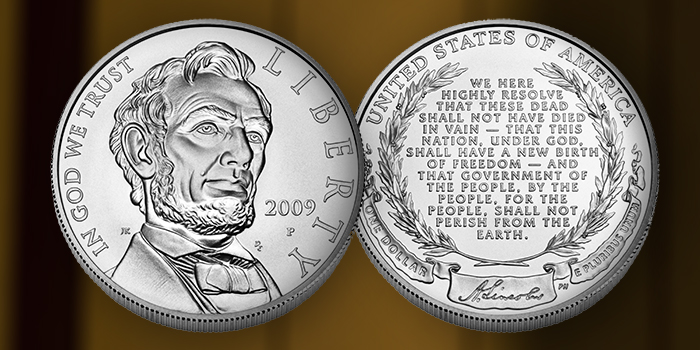 the 2009 Abraham Lincoln commemorative silver dollar honors the 200-year anniversary of the birth of President AbrahamLincoln. the United States Mint’s authority to strike the coin was derived from the signing of the Abraham Lincoln Commemorative Coin Act (Public Law 109-285), which was signed on September 27, 2006.

Abraham Lincoln was born into a family with modest means in the western frontier of Kentucky. His early life was one of struggle and family tragedy. Lincoln lost his mother at a young age and his family faced a series of financial upheavals over the years, mostly due to disputes over land titles. An inquisitive child, it’s highly likely that Lincoln’s self-study and interest in the legal profession were influenced by his father’s financial and legal struggles.

Before entering politics and attaining a law degree in his early 20s, Lincoln held a number of professions. He served as a militiaman in the Black Hawk Wara postmaster in the village of New Salem, and a partner in a retail business. In 1834, Lincoln was elected to the Illinois State Legislature. Two years later, he was admitted to the bar.

Much of Lincoln’s later positions as a national politician were formed during his career in the Illinois State Legislature. Illinois was in the process of transforming from a border state on the western frontier to a major economic center in the nation’s Midwest. Railroads and shipping lanes helped to fuel the state’s growing economy. During his tenure as a state lawmaker, Lincoln helped to secure funding for a number of important infrastructure projects, advocated for the relocation of the state capital to Springfieldsupported the strengthening of the state’s banking system, and in 1837, cast his first anti-slavery vote.

After an unsuccessful run for the U.S. CongressLincoln was elected to represent Illinois’ 7th District in 1846. He ran as a whig and promised to serve for only one term. He did not seek re-election but instead returned home to practice law. His practice mostly dealt with transportation issues involving railroads and river barges.

Lincoln’s return to national politics came in the decade preceding the Civil War. At the fore of Lincoln’s political life was the question of slavery. A leader in the Republican PartyLincoln argued against the expansion of slavery and against the North’s participation in the Fugitive Slave Act. Many of his beliefs on the issue were made public during a series of debates with Lincoln’s rival Stephen A Douglas.

Upon claiming the Republican Party’s nomination for President in 1860, Lincoln was stalwart in his refusal to allow the further extension of slavery in the border territories. For the Southern states, this position posed an existential threat to their economic, political, and cultural institutions.

Not one ballot was cast for Lincoln in two-thirds of the country’s 15 slave-holding states. Despite the South’s unprecedented rejection, Lincoln easily won an error of the popular vote and a decisive Electoral College victory. The secession of a majority of the Southern states was immediate and secessionist leader Jefferson Davis took office as the President of the Confederate States of America before Lincoln was even sworn in. Within two months, the country would be thrust into the bloodiest and most destructive war in the nation’s history.

Lincoln waged war against the south and despite early setbacks, stayed the course in his belief that the Union would be reunited one day. After years of military stalemates and little in the way of strategic victory, Lincoln’s Federal troops finally bested the poorly-provisioned Southern army. The economic, political, and cultural collapse the Southern States feared came to fruition, not due to the election of the nation’s first Republican president, but because of its inability to concede the point that the institution of slavery was holding the nation back.

Major social divisions, beyond those centered around racial lines, were brought into strong relief as the Southern economy crumbled. The system of the Confederate government was ill-equipped to sustain a prolonged war effort. And a lack of foreign trading partners and financing meant that southern troops had to engage in combat against an enemy that had better weapons, equipment, and provisions. The South’s defeat, in retrospect, was likely inevitable.

Lincoln secured victory with Lee’s surrender at Appomattox Courthouse on April 9, 1865. Six days later he was dead; shot in the back of the head by actor John Wilkes Booth. Martyred for the cause of freedom, Lincoln symbolized the hope for peace and unity in a time of great national need. He was eulogized, wept over, and elevated to the pantheon of America’s greatest presidents. American poet Walt Whitman wrote two of his most iconic poems about the slain president, “O Captain! My captain!” and “When Lilacs Last in the Dooryard Bloom’d.

His loss gave permanence to the political goals of the Republican party and 44 years later, the US Mint struck a one-cent coin honoring him. Lincoln’s cent saw circulation in the south by an aging generation of southerners who fought in or were directly affected by the war. It continues to be minted to this day.

The Coin: Design and Mintage

The law authorized the production of a 90 percent silver dollar with a maximum mintage of 500,000 pieces across all product options. A $10 surcharge from each coin sold went to the Abraham Lincoln Bicentennial Commission.

The design was selected by the Secretary of the Treasury in consultation with the Abraham Lincoln Bicentennial Commission and the Commission of Fine Arts, and reviewed by the Citizens Coinage Advisory Committee. Proof and Uncirculated versions of the coin were to be struck at separate mint facilities. A $10 surcharge from the sale of the coins was paid to the Abraham Lincoln Bicentennial Commission to further the work of the Commission.

The coin went on sale on February 12, 2009, and with an allocation of 450,000 units, the coin sold out after a period of one month. On October 15, 2009, the Mint offered the Lincoln Coin and Chronicles Set, which included a 2009 Abraham Lincoln Commemorative silver dollar in Proof and all four Proof 2009 Lincoln cent designs, along with a reproduction of the Gettysburg Address and a portrait of Abraham Lincoln . The sets sold out within the first week. The coin’s obverse features a likeness of Lincoln adapted from Daniel Chester French’s famous statue that is the centerpiece of the Lincoln Memorial in Washington, DC. The design was created by Master Designer Justin Kuntz and sculpted by US Mint Sculptor-Engraver Don Everhart. 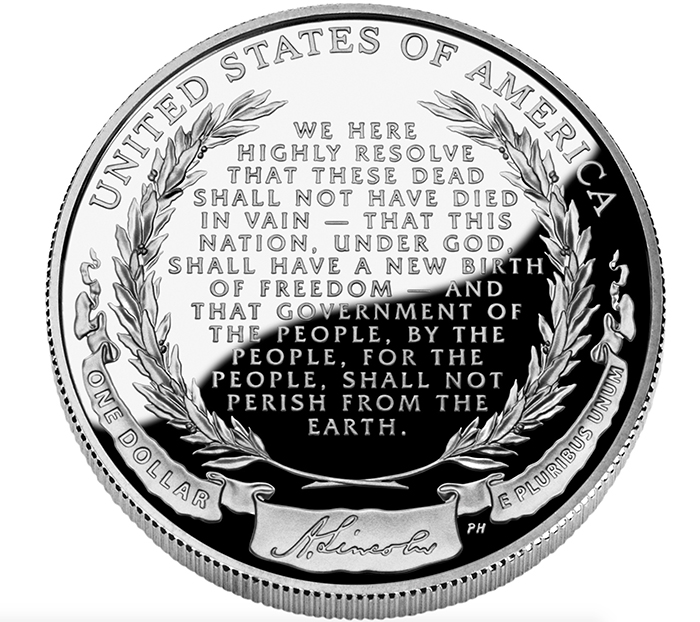 The reverse, designed by United States Mint sculptor-engraver Phebe Hemphill, features the last 43 words of the Gettysburg Address inscribed within a wreath of laurel. Lincoln’s signature is reproduced as the centerpiece of a ribbon that also contains the mandated inscriptions ONE DOLLAR and E PLURIBUS UNUM.

The edge of the 2009 Abraham Lincoln Commemorative dollar coin is reeded.

3 things to watch for in the Illini game against Missouri