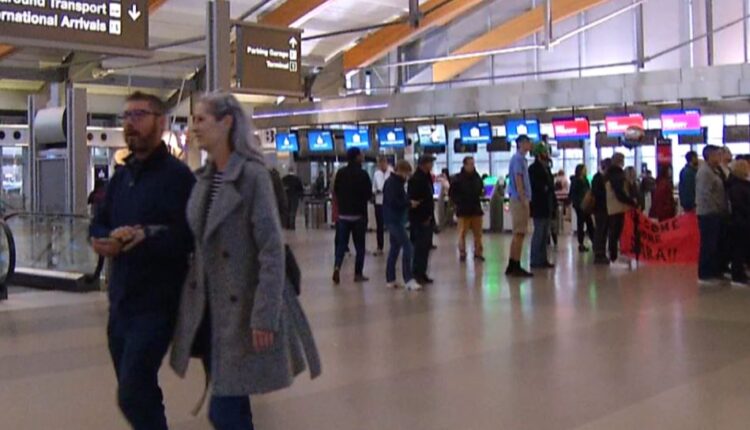 RALEIGH, NC (WNCN) — Raleigh Durham International Airport was either the waiting room or the destination for many people Thursday.

“We didn’t see her at all through the COVID years. So, yeah, it’s good to see her,” said Lynn Pacos.

Pacos stopped by RDU to pick up her sister, who flew in from Indianapolis.

“She was nervous about flying to begin with. So, I think if she had flown in from Chicago she would’ve canceled,” Pacos said.

To say she was nervous would be an understatement.

“I was stressed. I was worried about are we going to make it. Is it going to catch up with us? I didn’t know what was going on,” said Archey.

“This means a lot because she’s in Champaign and I’m here in Durham, so we don’t see each other for a while,” said Dennis Brown, who was holding Archey’s hand.

Meanwhile, Thursday millions of travelers scrambled to reach their stops ahead of a major winter storm.

American, Delta and other major airlines waived some change fees to encourage travelers to avoid the storm. However, many planes are already packed.

Thousands of flights were canceled nationwide. Most of them at airports in Denver and Chicago.

Madison Zaiden flew into RDU from Pittsburgh. She passed through some of the weather impacting flights. However, she said it was a piece of cake.

“I just listened to music and chewed gum so, it was fine. It wasn’t really scary,” she said,

RDU officials are expecting nearly 600,000 people to travel through the airport this holiday season.

KHN-NPR’s ‘Bill of the Month’ at 5: A Treasury of Solutions for Confounding Medical Bills