5 things to watch at the 2022 Norm Stewart Classic 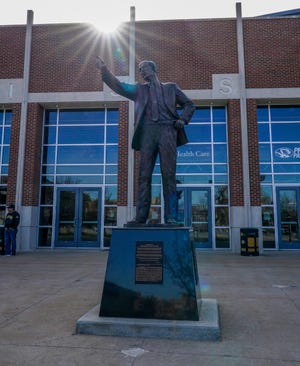 With the inaugural Sophie Cunningham Classic played through, the Norm Stewart Classic is ready to have its time on the hardwood.

The three-day event, beginning Thursday and ending Sunday at Mizzou Arena, features top-rated boys and girls preps basketball teams from all over Missouri, and nationwide.

Some of the best players in the nation will show off their skills, making it a can’t-miss event for basketball savants.

Here are five things to watch at the 2022 Norm Stewart Classic this weekend.

Columbia area teams take over the final day of play

On Saturday, Father Tolton, Battle, Hickman and Rock Bridge all play their scheduled games starting with Battle at 10 am

The Columbia Public Schools play all in a row Saturday. The Spartans take on Oak Park before Hickman takes on Chaminade at noon next. Peoria Notre Dame and Rock Bridge play at 2 pm

Class 6 Oak Park is 6-0 as of Tuesday afternoon, making it a tough challenge for a Battle team that’s gotten on a roll after finally getting healthy as starters Justin Goolsby and Vernell Holt return after missing games early on.

Hickman is currently 6-1 and takes on Chaminade, which is another test for the Kewpies. Hickman’s schedule included winning the championship at the Troy Buchanan Invitational and playing Link Academy.

Rock Bridge takes on Notre Dame from Peoria, Illinois. The Irish are 2-5 but have held four of their opponents under 50 points. The Bruins are 3-2 and have a successful run in the Phog Allen Tournament under their belts, where they earned a 63-61 wino over CMAC rival Jefferson City.

Tolton and Bartlesville finish the day’s worth of games, and the classic, at 8 pm Bartlesville, from Oklahoma, will test the Tolton defense as a team that’s scored over 150 points in two games.

Some of the best Boone County girls teams will also play in the classic.

Rock Bridge sees a tough test in Grain Valley, where the Bruins will face off against another Missouri signee in Grace Slaughter. Rock Bridge faced Quincy Notre Dame and MU signee Abbey Schreacke in the Sophie Cunningham Classic earlier in December.

Hickman, also coming off a championship at the Troy Buchanan Invitational, takes on a Lutheran St. Charles team that won 21 games last season in Class 5 District 4. The Kewpies are aiming to keep a pristine 5-0 record intact.

Southern Boone plays the earliest game of the day against Lutheran South, as the experienced Eagles are 2-2 and play a Class 5 Lutheran South team that’s 4-2. Southern Boone’s two losses have come at the hands of 7-0 Helias and Class 4 Rolla.

The best games of the weekend

Outside of the Columbia teams, there are a handful of top-tier basketball games to take note of.

One of the best tilts of the weekend is undoubtedly Link Academy against Southern California Academy. The basketball talent factories combine to boast nine of the top 150 players rated by 247Sports in the Classes of 2023 and 2024.

Nationwide, Link is ranked as the No. 1 overall team by HS Circuit and South California Academy is ranked No. 19

The last day of competition also gives us CBC against Kickapoo, two Class 6 stud programs. CBC won the Class 6 state title last season, and Kickapoo finished second in its district to Nixa, the Class 6 runner-up which fell to the Cadets in the state title game. Kickapoo won a state title in 2021.

Aaron Rowe, who was a first-team all-state player as a freshman last year with Father Tolton, will look to put on a show in his return to his hometown.

Rowe, already the No. 14th ranked player in the nation for the Class of 2025, transferred to Link Academy this summer from Tolton. Link Academy is a basketball prep school, known for building up some of the top high school talents in the nation under one roof.

Link might not compete for MSHSAA championships, but it competes for national championships at the high school level instead. Jordan Walsh and Julian Phillips, two of Link’s best players last season, are now at Arkansas and Tennessee, respectfully.

Rowe can follow the same path as a nationally ranked recruit. After just his freshman year, he earned offers from Kansas State, Missouri, George Mason and more. He’ll have a chance to remind Columbia fans why he’s so highly rated.

The biggest names to know over the weekend

Aside from Rowe, his teammates, also top-rated recruits in America, will take the floor in Columbia.

Link’s Class of 2023 includes Ja’Kobe Walter, Corey Chest and Cameron Carr, who have signed with Baylor, LSU and Tennessee, respectfully. All are rated as four-star prospects.

This doesn’t begin to touch on the rest of Link’s Class of 2023, which has players signed with Memphis, Oklahoma and Utah State. Even Link’s Class of 2024 boasts five-star Elliot Cadeau and four-star Tyler McKinley, who are still juniors that can improve.

KHN’s ‘What the Health?’: Health Spending? Only Congress Knows