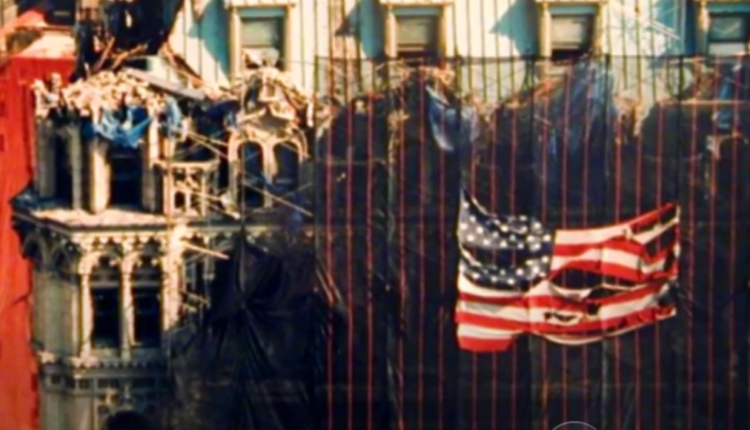 I’ve told this story many times in this space. If you’ve already heard it, feel free to pass. I’m telling it again because this morning is the twentieth anniversary of its happening. That, and it is especially haunting to me today.

On this morning in 2002, I woke up before daylight to join a journalist friend in Brooklyn, where we both lived, and to follow a NYPD bagpipe band down to Ground Zero. The NYPD arranged for one of its piper bands to begin marching from each of the five boroughs, all to converge simultaneously at Ground Zero, where the memorial service was to begin.

The only people who had access to Ground Zero were family members of victims, and officials. But when we arrived there, a huge crowd had massed outside the perimeter. I said goodbye to my friend, and melted into the crowd to gather material for the piece I was writing for National Review (I had gone to work there that previous January). I remember standing there at the edge of Ground Zero, looking at my watch, waiting for the minute when, one year earlier, the first plane struck the north tower. That was also to be the signal for the start of the memorial service at Ground Zero.

At that moment — at that precise moment — a ferocious wind blew in from the same direction that the plane had taken. It was uncanny. There was a hurricane far offshore, and this was its outermost fringe. Still, the timing was eerie. That wind blew like something biblical, all morning. Signs, chairs, anything not tied down was blowing around. I walked around in that for hours, watching and talking to people.

After a while, I made it to the other side of Ground Zero, and took refuge from the wind in Trinity Church Wall Street, the old Episcopal church next door to the Twin Towers. The Archbishop of Canterbury had come over to preside over a memorial service there. I stayed for that. At some point towards the end of that service, we all heard the bells toll from Ground Zero next door, signaling the end of the reading of the names, and that service. When I emerged out onto the street a few minutes later, the wind had stopped. I don’t know what time it ceased to blow, but I would bet it was when the last name was read. In all these years since then, I’ve never seen anything online remarking about it one way or the other.

I walked back home to Brooklyn, wrote a piece for NR, filed it, then relaxed. The phone rang. It was my journalist friend, slightly freaking out. “Come over,” she said. I took off.

At her apartment, she led me into her home office, and pointed to something hanging on a wall. It was a small American flag, almost paper-thin, and very old. Judging from the number of stars on its field, I would say from the Revolutionary War era. It was mounted and framed under glass.

And it was torn from top to bottom, right down the middle.

She explained that someone had given her that antique flag many years earlier. She had it framed, and it had hung on the wall of every home office she had had since then, wherever she lived. Every day she was home, for years, she had looked at it.

On this day, however, when she returned from Ground Zero, she noticed that it had been torn right down the middle.

Nobody else had been home, and if they had been, they would have had to have torn the paper on the back of the frame to get to the flag. It was untouched.

Both of us were, and are, Christian. The significance of this sign was not lost on us.

Three of the four Gospels record this event upon Jesus’ death on the Cross. This is from Matthew 27:50-51:

50 And when Jesus had cried out again in a loud voice, he gave up his spirit.

51 At that moment the curtain of the temple was torn in two from top to bottom.

The curtain of the Temple separated the Holy of Holies from the rest of the Temple. Traditionally, Christianity interprets this sign as indicating God’s judgment on the religion of His people, the Jews. I can’t speak for my friend, with whom I lost touch after I left New York, but I immediately interpreted the torn flag as a sign that God had withdrawn his protection from America, in judgment.

But that was a very difficult thing to accept back then, and not only because I didn’t want to believe it. It was also hard to accept because America seemed at that moment stronger than it had been in ages. We were the world’s sole superpower. And we were united as a people as we had not been since World War II. Yes, we were clearly headed to war in Iraq (the war would begin six months later), but it was inconceivable that that coming war would not go our way . We were so powerful — and we were morally right! Or so I thought.

I remember e-mailing Father George Rutler, the well-known Catholic priest in New York, telling him what we had seen with the torn flag, and asking him what it meant. He responded to say he was hesitant to make a pronouncement, but that it was unnerving to say the least.

You all know what came next: the disastrous war, the 2008 economic crash, and the steady unraveling of our country at the hands of this malicious new ideology called wokeness. I have spent much of the past year in the former countries of the Soviet bloc, and the thing I hear over and over, from men and women old enough to recall the Cold War is: “What happened to you?” They inevitable talk about how they used to look to America as a beacon of hope and a symbol of goodness. But no more. Now, most of them think of us as the country that exports destructive ideology, particularly about gender, to their countries, and behaves as a cultural imperialist.

And you know what? They’re right. We have become Babylon. If the Soviet Union was the Evil Empire in the Orwellian Nineteen Eighty-Four sense, what are we? Are we the Huxleyan Brave New World version? A totalitarian dystopia of dehumanizing sex, pleasure, pornography, and drugs? (Take a look at this Leighton Woodhouse piece in Tablet, talking about how marijuana, which is now a normal part of American life, has become so potent in refinement that it is causing horrific mental illness.) If so, then I can tell you the very day I saw it coming: September 11, 2002, after a tempest at Ground Zero, and the tearing of the veil of the Revolutionary War flag.

A caveat: the right-wing European commenter Niccolo Soldo has argued that in fact, despite all the signs of decay, America is more powerful than ever on the world stage. But it’s a different kind of power than we’re accustomed to. This is about a malignant unity among American elites. exception:

I get a lot of shit when I bluntly state that the USA has never been more powerful than it is today. People will point to the USA’s de-industrialization, its opiate-death crisis, its falling living standards, its disappearing middle class, crumbling infrastructure, the growing divide between red and blue states, and the collective meltdown of half of America thanks to Trump’s surprise win in 2016. All of these points are valid, but they also mean fuck all in the greater scheme of things.

To effect change (at its most conservative, or revolution at is most liberal), a segment of the elites need to defect to the side of those seeking change. The USA today is a picture of elites united in total. Bipartisan consensus on all matters imperial is the rule, with intelligence agencies in bed with both media and Silicon Valley. Those who diverge from “the current thing” are quickly cast out of good company, with some losing their jobs and becoming unpersoned. All centers of power (with the notable exception of maybe the massive NYPD) are firmly onside, happily conforming to ever-changing prevailing narratives that find their way into laws, into schooling, and into corporate governance.

“But Niccolo, the country helped hates this!” Sure, but they don’t matter. Flyover America can rot for all they care, so long as the lights aren’t turned off in the places that count. The idea that the people matter was easily laid to rest with how easily the Trump Administration was subverted through the joint action of the intelligence/security services with the mainstream media, NGOs, the judiciary, and various planted agents within the actual Trump Regime. They then went on to “fortify” the 2020 election to ensure that such a wrong result could not be repeated. If it is repeated again, they will simply subvert once more, as they got away with it the first time and are still in the same positions of power.

It does not matter to the elites whether Peoria, Illinois or Topeka, Kansas is seeing growth or regeneration. This does not impact the concerns of those in power on the federal level because these are national concerns that have for some time taken a back seat to imperial concerns. John McWilliams in Greenville, South Carolina is as relevant to them as Jose Cortes in Arica, Chile, or Dieter Schliemann from Dortmund, Germany: they are all imperial subjects.

Censorship plays a key role in this, as those with ideas that run counter to prevailing narratives and foreign policy objectives and who gain sizable audiences, are to be unpersoned to “protect democracy”, as per Max Boot.

Marc Andreessen explains how he sees this playing out:

Get weekly emails in your inbox

Few reject the overwhelming evidence of growing conformity in western society with respect to prevailing narratives involving “the current thing” as the fear of punishment for those who diverge from those narratives is overwhelming, due to the increasingly precarious economic conditions that most people now live in This makes censorship quite a lot easier, only serving to make policy much simpler to effect when opposition is either muted or silenced altogether. It also gives the impression of overwhelming support for imperial policies and dictates.

Read it all. It’s important. You need to understand where we are, and what’s coming. And take a look at this other essay by Niccolo Soldo, in which he tracks how the US elites are endeavoring to do to the whole world what they’re doing to their imperial subjects at home.

If you are the kind of sentimental patriot — especially a Christian patriot — who believes that America is as she always was, I invite you to contemplate the torn flag in light of events of the last twenty years. I wish I could be more hopeful on this solemn day, but it is what it is, and we aren’t who we were as a nation.