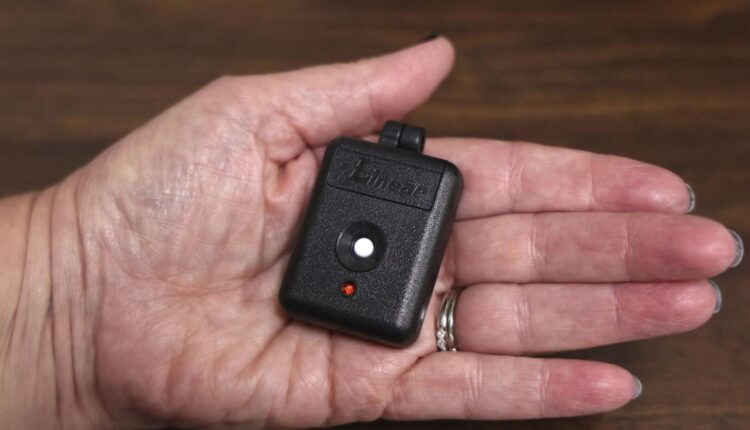 BELVIDERE, Ill. — Hidden amid the maze of filing cabinets and desks inside the otherwise unremarkable offices of the Boone County Clerk and Recorder are five buttons employees can press if they think they are in danger.

The “panic” buttons — one nestled behind a fake plant, another tucked away in an easily accessible drawer — were installed ahead of the 2020 general election after Clerk Julie Bliss, who oversees elections in the county, saw national rhetoric about election fraud getting more heated.

Since then, the situation hasn’t gotten any better.

The panic buttons and new security locks were precautionary in case one, several or even a mob of people barged into Bliss’ offices in Belvidere where Boone County’s ballots are counted on Election Day. But the “overall anger and tenseness” of the national political environment means the security safeguards are there to stay, said Bliss, a Republican who has been clerk since 2017 and is an official with the Illinois Association of County Clerks and Recorders.

Across the nation, protesters and extremists — many following former Republican President Donald Trump’s false claims that the 2020 election was stolen — have harassed, threatened and intimidated election workers. It’s a development their counterparts in Illinois have noticed and, in some instances, experienced themselves.

Election officials across Illinois offer a variety of answers about security and precautions being taken for the Nov. 8 elections and what, if any, harassment or intimidation they’ve received. Some say they haven’t felt tremors from the national threats. Still, many acknowledge there’s been a sea change in how elections are perceived by the public, and they know Illinois isn’t immune.

Bliss said that, in addition to calls from suspicious voters, she has received calls from prospective election judges who feel nervous about the job. In one case, someone considering becoming an election judge decided against it because they felt the safety risk was too high.

“They were very concerned about the safety in a polling location for the judges, (asking) how is it that I would possibly manage to make sure that they’re safe? I can’t promise that,” Bliss said while in her office in Boone County, where in 2020 Trump led President Joe Biden by 13%. “I can’t say that somebody is not going to walk in the door and just do something, no more than our schools could tell me as a parent that.”

In Murphysboro in far southern Illinois, Jackson County Clerk and Recorder Frank L. Bryd, a Democrat, said he’s been insulted and received aggressive comments. Some residents have even made derogatory comments to his family members, he said.

In a county where Biden finished ahead of Trump by just 1%, Byrd said, the local Republican Party has organized requests for records from his office that he thinks are needlessly time-consuming, and that local GOP leaders have second-guessed mail-in ballot efforts by pressing him to pull names from the voter rolls.

Jason Svanda, the chairman of the Jackson County GOP, said the records requests to Byrd’s office are legal and that the party’s efforts on the voter rolls is to ensure that elections are fair.

“Voter integrity is a major concern across all of Illinois,” Svanda said.

Still, Byrd said a pastor friend of his recently sat Byrd down and told him to be careful, adding that he has noticed some have become outraged since he installed ballot drop boxes at a police station and a courthouse that are monitored by video cameras.

“I’m going to make sure people have accessibility until my last breath,” said Byrd, who added that secure, democratic elections will be increasingly threatened if election deniers are allowed to flourish.

“I think they’re getting more ramped up and more violent,” he said. “In the 2024 election, it’s going to be really rough. … It’s going to be scary rough.”

David Becker, executive director of the Center for Election Innovation & Research, a national nonpartisan, nonprofit organization that works with election officials to build voter trust, said election workers nationwide have been subjected to “years of harassment, abuse and threats.”

“I don’t know a single election worker across the country, from the secretary of state level down to volunteer poll workers, who doesn’t think their job has changed,” he said.

Election workers have reported more than 1,000 incidents of harassment or hostility, according to an August report from the US Department of Justice. Administrators in some places, including a Republican supervisor in Arizona’s Maricopa County, have even gotten death threats for rejecting bogus election fraud claims, Becker said.

“It is a new thing entirely. It’s worse than it’s ever been,” he said. “They’re being attacked because they did something incredibly well. They somehow managed the highest turnout we’ve ever had in American history in the middle of a global pandemic.”

Unlike other states in the nation, Illinois’ election system isn’t centralized, a fact local election authorities point to as a reason why coordinated widespread vote fraud is less likely to occur.

On a state level, the Illinois State Board of Elections provides oversight of elections, and the board also provides training for election judges in smaller counties. Due to the controversy stoked by untrue claims of election fraud, that training has included a greater emphasis on de-escalation and handling aggressive poll watchers, said state board spokesman Matt Dietrich.

“It would be almost impossible to not be aware of the potential for problems here,” Dietrich said.

Some poll watchers, who monitor elections without being involved in the operations, have surfaced because they incorrectly thought rampant voter fraud determined 2020 election outcomes, Dietrich said. He noted that Illinois wasn’t a main target of election deniers but said anecdotes reported from around the state’s June primary detailed that some poll watchers were more aggressive than they had been in the past.

But while Illinois election officials have said there are no known specific security threats regarding this election, some administrators have heightened security measures throughout the electoral process. Others brace for more severe threats in future elections.

DuPage County Clerk Jean Kaczmarek said her office has received angry, profanity-filled voicemails claiming the 2020 election was stolen. Some messages in the past few years have even threatened violence, she added.

“The threats are real and they are out there,” said Kaczmarek, who in 2018 became the first Democrat elected to countrywide office in DuPage in 84 years. “We don’t know when someone who is listening to this rhetoric might act on it.”

This summer, written in testimony to the US Senate Judiciary Committee, Champaign County Clerk Aaron Ammons asked for more federal funding for security measures such as metal detectors.

“I don’t like having to have metal detectors, but I think it’s irresponsible of me to ignore the sensitivity and ignore the culture and the environment that we’re in right now and have something happen to one of my staff members because I wasn’t ‘t proactive,” Ammons told the Tribune in an interview.

For this election season, however, he said he has faced difficulty retaining election judges, many of whom are older. He isn’t the only one with that concern.

‘Our judges are worried’

“Our judges are worried. We do watch what’s going on nationally and it does make our judges worried,” said Staley Ferry, who has asked police chiefs in Will County to add extra patrols on Election Day. “We just want to do everything we can to make them feel safe.”

In Springfield, Sangamon County Clerk Don Gray, a Republican, said that while he hasn’t seen a major shift in hostility toward him or the office, he has noticed election judges are spending more time on security during their training.

“We can tell it’s on the forefront of the minds of election judges,” he said.

Other clerks and election officials, including those in Chicago and suburban Cook County, said they have not received an influx of safety concerns.

“We count ourselves lucky here at the Chicago Board of Elections comparatively to many of our other friends at different election agencies, in that we haven’t received the same amount of threats or emails or the type of calls that many other election authorities either across the state or across the country are getting,” said Max Bever, spokesperson for the Chicago Board of Election Commissioners.

“Everything’s changed since 2020,” he said. “We are paying attention to what’s happening across the country.”

Back in Boone County, each polling place will have a poster outlining safety measures provided by the county, Bliss said. Her primary concern is not at the polling places, but rather at her office while the votes are being counted after the polls close, she added.

Because an attack on this part of the process could affect the county’s results, she will have off-duty police officers guarding her office at that time, as she did during the 2020 general election. She said that at the Illinois Association of County Clerks and Recorders August conference, other clerks were considering taking similar measures.

But some Boone County election judges view the situation as motivation to keep doing election work. For Linda Castro-Sebena, a Boone County judge since 2014, the “intense” political climate has only stoked her passion for helping to run the election with integrity.

“Here in Boone County, being that we are a small county, I don’t think there’s been a big change, as far as you know, oh, gosh, our safety or anything. I’ve never felt intimidated or afraid or anything,” she said.

Despite the measures Bliss is taking, any concerns she and her husband have about her personal safety are second to the job.

“It’s important. And if something is that important then you’re willing to risk what you have to,” Bliss said.

Election denial could shape future elections, Becker said. Many election workers, exhausted and overwhelmed, have left the field, and professionals with decades of experience could ultimately be replaced by people “who think it’s their job to put their thumb on the scale,” he said. He has faith that the integrity of election outcomes is now secure, but thinks continued fraud claims could incite more violence, even a flurry of “little Jan. 6s.”

“Tens of millions of Americans have been led to believe that the only secure election is an election which their candidate wins,” Becker said. “That’s an unsustainable idea in a democracy.”

(Crowley is a freelance reporter.)