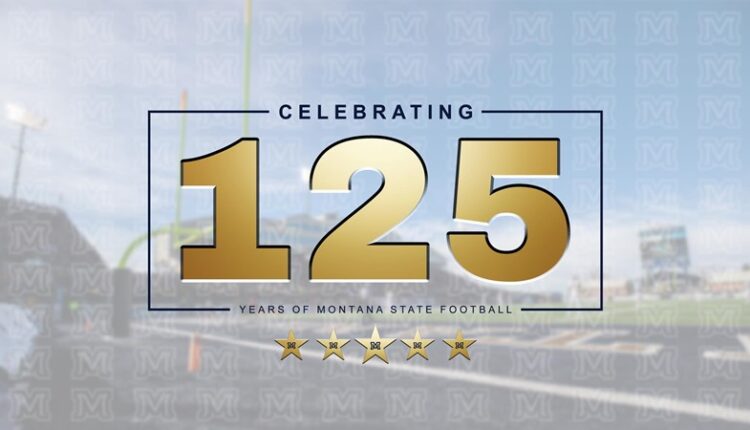 Leading to the 2022 season, the 125th anniversary of Montana State’s first football team, we will look at 125 of the greatest Bobcats. You can find details here and a directory here.

A CLOSER LOOK: Radford “Punk” Taylor brought a frontier-infused toughness to his role as a Bobcat football player. He grew up on Darby and Nannie Taylor’s family farm near Bozeman, and for many years his father also hauled freight with a large horse-drawn wagon. When Radford was 12 he managed to corral a runaway buggy whose horses became spooked by a street car while standing idle near the Bozeman Hotel, hanging onto the lines and keeping the rig in the middle of the street and away from parked carriages along the sides of Main Street. The buggy was returned intact, the horses unscathed. Taylor starred for the state championship Gallatin County High team that featured classmate Cy Gatton in 1912, and he contributed in 1913 as a freshman.

Upon his election as Montana State team captain before the 1915 season, the Anaconda Standard called Taylor “Conscientious, hard-working, heady and strong as an ox, the fighting Irishman should make a name for himself this fall.”

The Montanan yearbook summed up Taylor this way after his freshman season: “‘Punk’ is another product of the Gallatin Valley that came to Montana State lastfall. He easily landed a position on the line and played a strong, steady, consistent game through the ‘Punk’ always plays good football, but on one or two occasions nothing seeemed to be able to stop him; he tackled runners behind their own line their own line, blocked punts and generally played a stellar game.It later became known that ‘Punk’ was finincially interested in these games. however, at any time he always played a wonderful game and should prove a balwark in Montana State’s line during the next three years.”

In wrapping up the 1916 season, the exponent said, “Taylor should do better than ever in 1917.” But instead, Taylor and Gatton hopped an eastbound stock train and departed for Madison, Wisconsin, transferring to the University of Wisconsin. A Billings Gazette headline on September 23, 1916, declared “Football Hopes at Bozeman Shattered,” referencing the presence of seven experienced players stationed at the US-Mexico border as part of the Montana National Guard, as well as the exit of Punk Taylor and Gatton. The two played on the Badgers’ freshman team to satisfy transfer rules, with local news reports calling Taylor the strongest tackle and Gatton the fastest back on that team.

While Gatton’s fate is well known, Taylor’s is less so. After being turned down by the US Navy due to his football injuries he enlisted in the Army and served for around two-and-a-half years. Playing guard for the Badgers in 1919, and now known as ‘John R. Taylor,’ the school’s yearbook cited him as “a steady, dependable man all season. In the final contest with Chicago, he opened up holes for line plunges and blocked the smashes of Chicago backs time and again. His interference in Davy’s sixty yard run was partly responsible for the Wisconsin victory.” Taylor lettered for the Badgers in 1919, his lone season on the UW varsity, playing behind All-America tackle Ralph Scott but excellent when called upon. After time working for the Selway Sheep Company in Hardin, Montana, now listed that as his hometown and completed his thesis in Summary Sheep Breeding.

Taylor married Betty Ann Oller Taylor, originally from Illinois, in Hardin in 1922. Taylor worked for the Montana Dry Land Farming Corporation in Hardin and later Poplar. The family lived in Peoria, Illinois, from at least 1931-35, and by 1940 resided in Memphis, Tennessee and managed a heavy equipment company.

Taylor put his long-held interest in football and professional expertise in heavy equipment to use in the 1950s and 1960s to use by creating a contraption called a “muscle buggy.” A distant cousin of the wheel barrow, Taylor dreamed up the idea as a way to help the Memphis State football team train, and eventually sent three of them to Wisconsin for use by the grid squad there.

Taylor lived out his years in the Memphis area and passed away on July 25, 1977. His wife survived him until 1986, and is buried next to him. Their son Keith (adopted by Punk from Betty’s previous marriage) became an active outdoorsman and his daughter Diane Taylor Eaton wrote in the Germantown, Tennessee, newspaper on December 22, 1977, that “this lifestyle was inhertied from me grandfather, Punk Tyalor, who was obrn and raised in Montana. Members of my family have qualities that originated with him: love and respect for nature, hard work, great enthusiasm for the outdoors, and accepting and dealing with the challenges that the balance of nature provide.”

FROM THE 1917 MONTANAN YEARBOOK: “‘Punk’ is one of those people who speak slowly and distinctly. He made a speech in Assembly once, after having played battering ram with big Bentz of Missoula, but since then his oratorical achievements have been more or less limited. Doesn’t believe in taking life too seriously, and even attends classes just for fun.”

FROM 1933 EXPONENT: “Radford Taylor was the co-captain of the 1916 aggregation. The 1916 edition of the Montanan states “As Captain, “Punk” instilled much of his freight-juggling education into (action) with the result that the line, with Taylor as the backbone, was as strong as any of which Montana State ever boasted. As a player, “Punk” brought his fright-juggling education into action, and, needless to say, the object of his attentions usually assumed the position “Punk” desired. Taylor should do better than ever in 1917.”