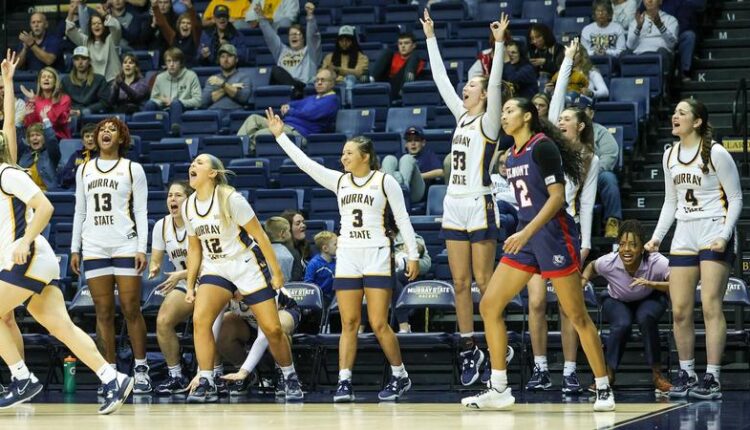 the games
For the sixth and final time this season, the Murray State women’s basketball team will face a brand new opponent when Bradley rolls into the CFSB Center for a 2 pm tip-off Sunday.

Last time out
Leading from start to finish, the Racers made a statement Wednesday with a convincing 64-46 win over OVC-foe turned MVC-foe Belmont. Katelyn Young led all scorers with 20 points, while Alexis Burpo and Hannah McKay each had a game-high eight rebounds.

Series At A Glance
Sunday will be the first-ever meeting between Murray State and Bradley.

Scouting The Braves
Bradley is currently 3-13 overall and 0-5 in The Valley after a 60-50 loss to Illinois State Wednesday night in Peoria, Illinois.

Caroline Waite and Alex Rouse currently lead the Braves in scoring at 13.3 and 11.6 points per game, respectively. On the boards, Isis Fitch pulls down 6.9 rebounds per game to lead Braves, while Daija Powell follows at 6.0

A Win Would…
A win Sunday would move the Racers to 5-1 this season against first-time opponents. So far this season, the Racers have won the first meetings against Southern Indiana, Bellarmine, UIC and Valparaiso, with the lone loss coming at Drake.

A Marquee Win
Murray State snapped a four-game overall streak and a seven-game streak in Murray against Belmont Thursday. The 46 points allowed by the Racers is the fewest allowed in the 23-game series and the 18-point margin of victory Wednesday was also the largest of the series.

Free Throw Perfection
The Racers went 10-for-10 at the free throw line Wednesday marking just the eighth time in program history that the Racers have been perfect at the charity stripe on at least 10 attempts.

get low
The 46 points allowed by the Racers against Belmont Wednesday marked the 10th time this season that MSU has held a team to 60 points or fewer. The Racers are now 10-0 in those contests, accounting for every MSU win this season.

The Big 2-0
Katelyn Young scored 20 points Wednesday against Belmont, marking the seventh time this season that she has scored 20 or more points in a game.