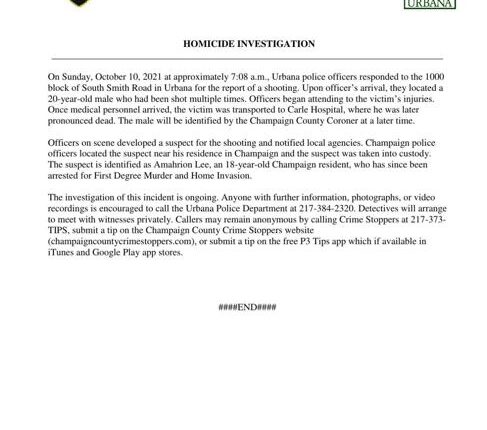 URBANA – An 18-year-old Champaign man was arrested for first degree murder and home burglary in connection with a fatal shooting early Sunday in Urbana.

Urbana Police announced on Sunday that Amahrion Lee had been arrested for shooting an unidentified man on the 1000 block on South Smith Road, where police were called at 7:08 am

When they arrived, they found that the victim had been shot several times. He died later that Sunday at the Carle Foundation Hospital.

“Local officials have identified a suspect in the shooting and notified local authorities,” Urbana police said of Lee. “The Champaign Police have located the suspect near his home in Champaign and the suspect has been taken into custody.”

The investigation continues, the authorities said. They asked anyone with additional information, photos or video recordings to call Urbana Police at 217-384-2320.

Those wishing to remain anonymous are encouraged to contact Champaign County’s Crime Stoppers at 217-373-8477, 373tips.com or the free P3 Tips mobile app.