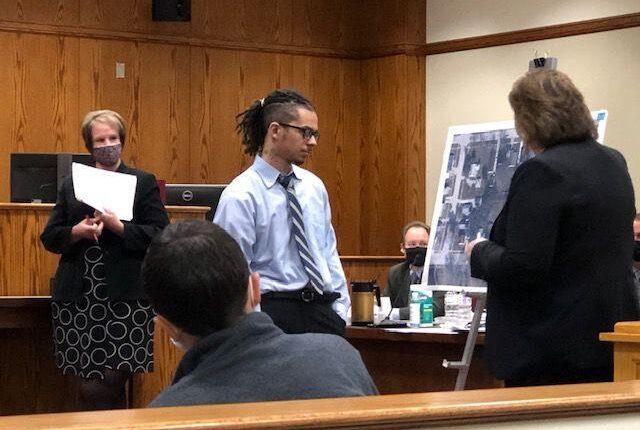 URBANA – Calvin Williams will celebrate his 19th birthday at the Champaign County Jail on Saturday, the first of many to pass behind bars after being convicted of the first degree murder of a former friend.

It took a Champaign County jury 40 minutes Friday to reject Williams’ claim that he shot Gerryontae “Tae Tae” Brown, 16, in self-defense on November 12, 2020.

Judge Randy Rosenbaum set the sentence for December 8th. Since the jury found that Williams was the one who fired the gun that killed Mr. Brown, he faces a life sentence of 45 years.

The jury heard four days of testimony about what happened at the Brown house on East Eureka Street in Champaign on November 12, 2020, and last heard from Williams.

He testified for about 50 minutes Friday morning that he believed Mr Brown had a gun in his hand that evening and his life was in imminent danger, so he shot first.

During questioning by his attorney, public defender Janie Miller-Jones, Williams denied holding any grudges about money that he believed Mr. Brown stole from him in August.

The state had built its case on this motive and backed it up with physical evidence and multiple witnesses who said they saw Williams with a gun outside the house around 5 p.m. that day.

Instead, Williams testified that he and friend Whitfield Harris, 20, went to “The End,” a nickname for North Champaign, to sell cannabis. They crossed a gap in the fence, a shortcut that many used, behind Mr. Brown’s house to get to Douglass Park.

Williams admitted he was armed.

“I was robbed on this side of town, so (I had it) for protection,” he said of his reason for carrying a .22 caliber gun that he had bought about three weeks earlier.

Williams denied that he intended to go to the Browns house, but said when he walked through the fence he saw people outside the house.

“I saw some people with guns grabbing their sides and yelling at us. I drew my gun and shot in the air. I could see guns and felt threatened, ”he said, explaining that he wanted to scare the group. “I ducked behind a car.

“I thought it was going to be a shootout. I didn’t run because I was outnumbered and thought I was going to be shot, ”he added, saying he was getting closer to the house.

“I saw movement in the house. I saw a shadow with what looked like a weapon. I thought they were going to shoot me from the window. I shot first, ”he said, adding that he had no intention of shooting Mr. Brown.

As he walked out of the house with Harris, who was granted immunity for testifying, Williams said he heard more gunshots.

“I thought they were going to shoot me,” he said.

In concluding arguments, the deputy prosecutor Kristin Alferink rejected any notion that Williams’ use of force was justified.

“He shot through that window to kill Tae Tae. There’s no other reason, ”she said. “He wants you to believe that Tae Tae would kill him. He’s just mad at Tae Tae, goes to the window and shoots eight times. “

No weapons were found in the Browns house that night. The gun that Williams used to kill Mr. Brown was found months later in Michigan, where Williams fled the day after the murder to return to that state to live.

Alferink argued that even if Williams was telling the truth about seeing others with guns, he had plenty of time to retreat after firing his warning shot as he sent many of those outside back to the Brown house.

Instead, Williams moved closer to the house.

She alleged that Williams, who admitted that he had researched second degree murder while in custody last year, had plenty of time to mold his story into a self-defense lawsuit after learning of the state’s evidence against him.

“The statement of the accused is completely unbelievable. None of the other witnesses say they duck behind cars, ”she said.

Miller-Jones argued that there was a discrepancy in what the witnesses in the house saw. A neighbor next door who testified to seeing two men in black in the back yards of their home and the Brown house for about 15 minutes before the shooting took place was likely wrong, Miller-Jones suggested.

“Is it possible that she saw two different groups of people?” She asked.

She admitted that her teenage client should not have carried a gun, fired a warning shot or approached the house.

“We’re not him. We weren’t faced with what he was that day, ”she said. “It happened very quickly for Calvin. He did not pursue Gerryontae. When he went through the cut to sell his weed, he didn’t know Gerryontae would be there. “