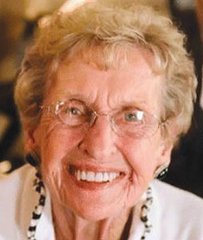 Dorothy (Dottie) Jean Gudeman, 93, of Greenwood, died peacefully with her family by her side on November 8, 2021.

Dottie was born on May 26, 1928 in Cissna Park, Illinois. She was the daughter of the late Carl and Erna Barth. Dottie taught in elementary school after graduating from Illinois State Teachers College in Bloomington, Illinois. On June 5, 1949, she married Edward Gudeman of East Lynn, Illinois, and they were happily married for 61 years.

After farming in Benton County Indiana for over 11 years, Ed and Dottie moved their five children to Frankfurt and then Crawfordsville for seven years. While in Crawfordsville, Dottie “Initally …” owned a monogram and engraving gift shop that included a catalog service.

Dottie and Ed retired to Bloomington, Indiana, where their five children had studied, as lifelong Indiana University fans and supporters. In Bloomington, Dottie and Ed enjoyed attending sporting events, concerts, and serving in the First United Methodist Church.

It was also preceded by brother Edward Barth and granddaughter Abigail Gudeman in death.

Dottie’s family would like to thank their friend Diann Munn, Dr. Todd Dudley, Brookdale Hospice, and the staff at Independence Village in Greenwood would like to express their sincere thanks for their nearly five years of care and support for Dottie during her stay.

A private memorial ceremony is planned.

Commemorative donations may be made to the Webb Foundation for the Music Program at First United Methodist Church, 219 E. Fourth St., Bloomington, IN 47408.

Florida Sen. Rick Scott Off Base in Claim That Rise in Medicare Premiums Is Due to Inflation