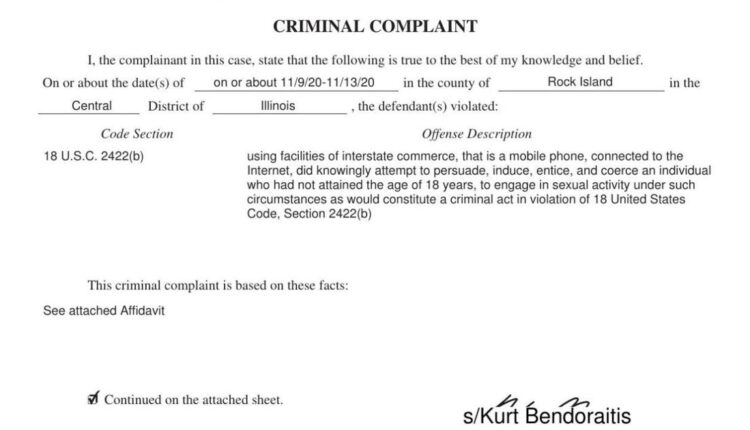 • Douglas Michael Speer of Johnston, Iowa, who was 30 years old at the time of his arrest, pleaded guilty on June 10 of two cases of attempted lure to a child and one of traveling with intent to engage in illegal sexual activity . He is due to be sentenced by the Rock Island District Court on October 20.

• Auston M. McLain, 36, of Davenport, is charged with attempting to lure a minor, travel with intent to engage in illegal sexual activity, and request an obscene visual representation from a minor. According to court records, McLain was ordered to undergo a psychological examination at the Federal Bureau of Prisons, Metropolitan Detention Center, in Los Angeles. According to court files, the evaluation should be completed by September 9th, and the final report should be available to the court by September 30th.

• Douglas L. Christensen, 56, of East Moline pleaded guilty on July 13 of attempting to lure a minor. He is due to be tried on November 3rd by the Rock Island District Court.

• Damien Pernell Shepherd, of Moline, who was 35 at the time of his arrest, is charged with attempting to seduce a minor. His trial was scheduled for October 4th in the Rock Island District Court. His attorney, Defense Attorney Thomas Patton, has filed a motion to suppress Shepherd’s testimony to agents in the case. Patton argues that Shepherd told authorities that he was going to rely on his right to remain silent at the time of his arrest. However, the authorities held a dialogue with Shepherd on other issues. Patton argues that Shepherd is intellectually disabled and has been “manipulated” into using one of the officer’s phones to call his mother, which the agents allegedly overheard and taped for evidence. Patton argues that the agents’ continued dialogue with Shepherd and alleged “sardonic remarks” about his refusal to speak to agents ultimately broke the man’s will and spoke to agents without a lawyer present. On Wednesday, U.S. District Judge Sara Darrow ordered federal attorneys to respond to Patton’s motion by October 25.