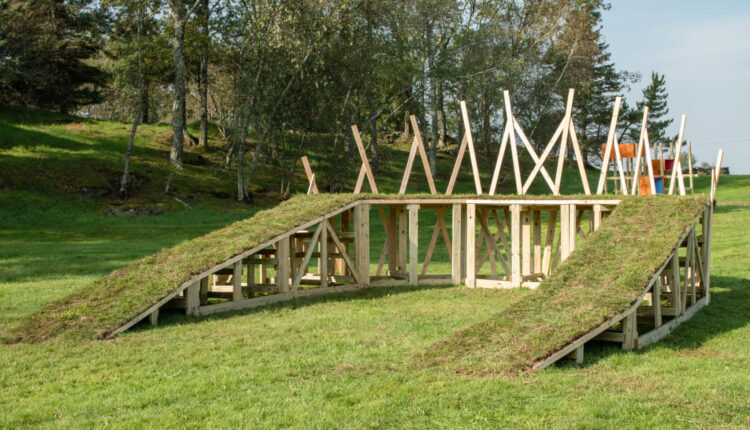 In 1996 television magnate Alan Gerry purchased the historic grounds in Bethel, New York which played host to the 1969 Woodstock Music and Art Fair. Over the next decade, Gerry transformed the site into the Bethel Woods Center for the Arts, spending $150 million constructing an on-site amphitheater and museum. For the past three years, the organization has worked to develop the Bethel Woods Art and Architecture Festival on the fabled 300-acre grounds. The theme of the inaugural festival was “Adapt, Mitigate, Design,” encouraging design teams to imagine architecture as a vehicle for social and environmental change through a series of installations. It is based upon the principles of the “Builder Method,” an open-source and hands-on methodology developed by Hello-Wood Studio. Participants in the design intensive program were required to incorporate upcycled materials and consider adaptive use in their build.

i/thee elaborated on the three themes and the design direction for the program in a project description: “Through the prioritization of environmental, sustainable, and ecological criteria as quintessentially architectural inquiries, we pose the questions: How can we, as a society of builders, leverage architecture as an educational tool to teach users to adapt to changing social/environmental circumstances? How can design be used as an instrument to churn diverse histories, points-of-view, and cultures into productive solutions? If we so choose, can we live differently tomorrow than we do today?”

A pilot run of the festival earlier this year saw the design and construction of a wooden installation Peek-A-Boo, a partnership between design practice i/thee and students at Texas Tech University. In late August, the organization hosted the inaugural design-build camp as part of the Bethel Woods Art and Architecture Festival. Designers at i/thee worked with student teams from Cornell University, Illinois Institute of Technology, Kean University, and Rochester Institute of Technology to construct four permanent installations on the festival grounds. The structures were designed with the intention that they will become a permanent feature of the Bethel Woods Center for the Arts, each accommodating one of the core programs offered by the organization, including performances and pop-ups.

Frame Folly, designed by students from Kean University, comprises an intricate work of criss-crossing wooden beams. Stained wooden volumes, with bold colored interiors, in the shape of rectangles and circles are placed around the structure to curate the natural environment according to the viewer’s orientation in relation to the work. The design of Frame Folly was led by Stephanie Sang Delgado and Fabio Castellanos with help from students of the Michael Graves College School of Public Architecture, including Vitor Costa, Christopher Cabareas, Carlos Cruz, and Maria Jaramillo. 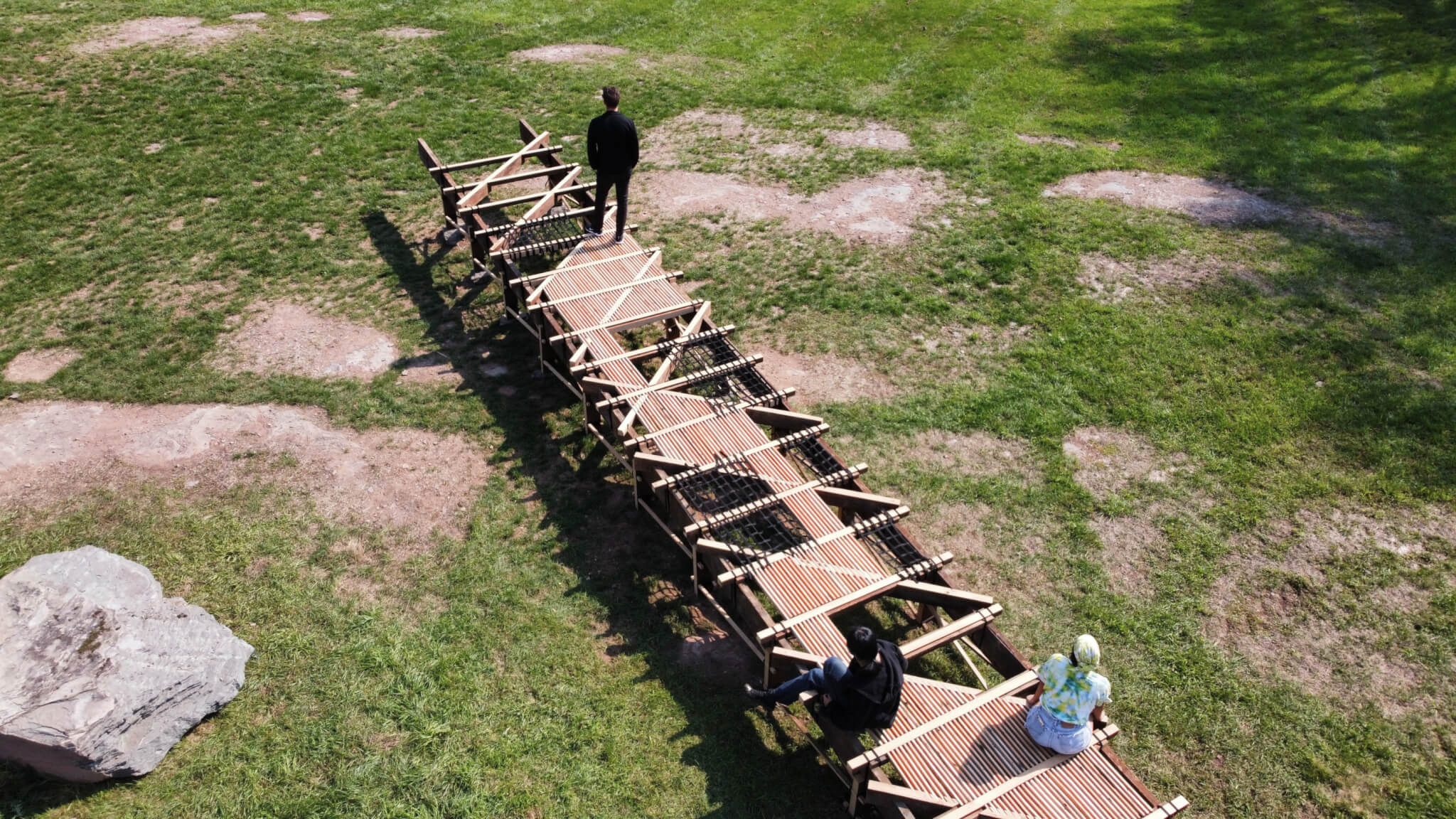 Boardwalk, a walkway installation constructed from reclaimed lumber, was designed by Cornell University and Illinois Institute of Technology students. The structure is situated alongside a historic stonewall and barn which were present on the property during the 1969 music festival. The project uses no metal fasteners, and instead has been assembled using lapped notches, which were installed in the wood with a CNC router. The mountable structure is also bound through the use of hand-stitched cables which function as seating atop the boardwalk. The design of Boardwalk was led by Dillon Pranger and Christopher A. Battaglia with help from students Marlee Barnes, Maxwell Rodencal, Sophie Chen, Keygan Sinclair, and Samuel Castaneda. 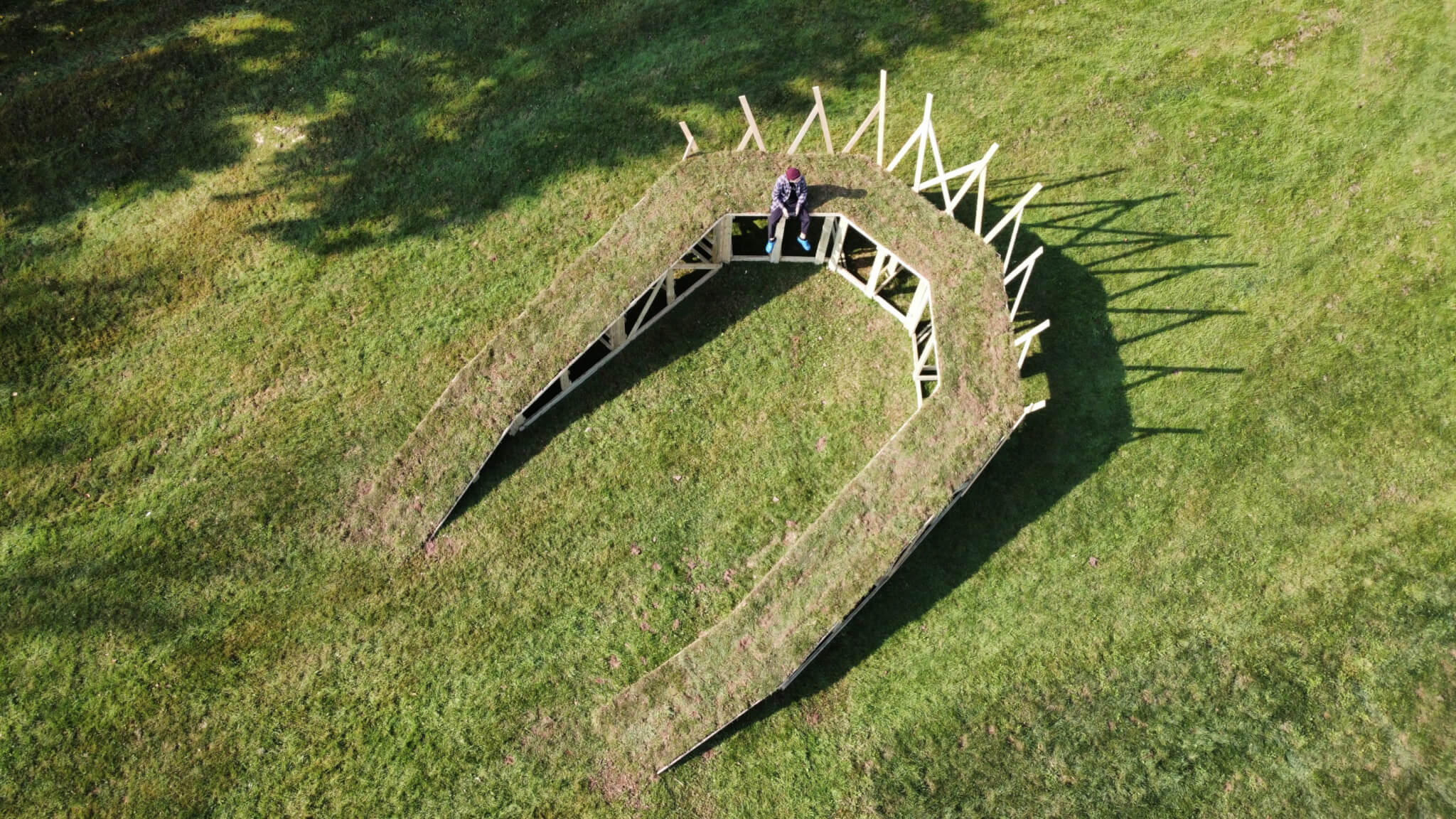 Mound, a grassy ramp in the shape of a horseshoe, hoisted by a wooden base, was designed by a team of students from the Rochester Institute of Technology. The installation allows visitors to traverse up the sloping structure to look out over the historic site.

“When visitors walk on the sod-covered ramp, they are elevated above the ground that attendees walked on in 1969,” i/thee described in a project description. “Thus, the installation allows visitors to leave their own footprint on new ground—symbolizing the continued birth and rebirth of personal connections to the spirit of the original Woodstock festival.” 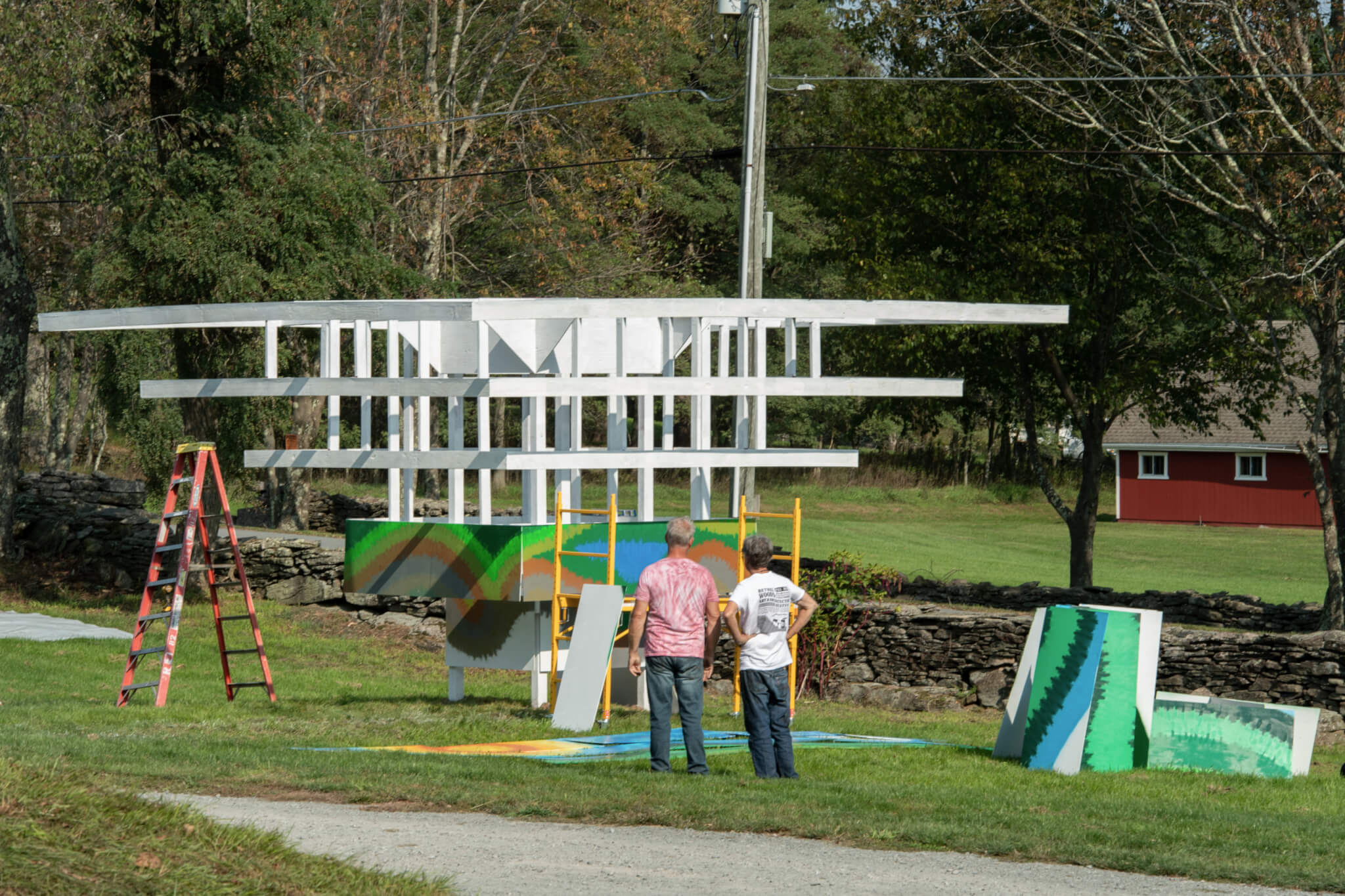 The final installation, titled Inverted Ziggurat, was designed and implemented by the team at i/thee studio. The project is a reinterpretation of Joel Kerner’s 2021 installation—a 20-foot cantilevered structure descending in two-foot increments to a four-foot base. While the original installation was covered in reflective mylar sheets, i/thee replaced the mylar with plywood panels painted by Micheal Randels that are reminiscent of tie-die patterns to recall the aesthetics of the first Woodstock festival. Randels also worked on the murals for Woodstock 99, a festival in Rome, New York modeled after the original event.

The Bethel Arts Center for the Arts is already thinking forward to next year and hopes to expand the design-build program to include students from a total of eight universities.