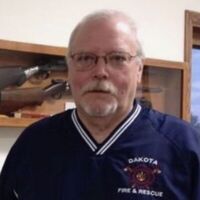 On December 11, 2022, Gregory Charles Gerlach, 76, lost his short but courageous battle with the only thing he couldn’t beat, cancer. This occurred at his home where he was cared for by the love of his life, Lana and his beloved dog Cujo.

Greg was born to Joseph and Josephine (Beckwith) Gerlach on April 11, 1946, in Urbana, Illinois, the 3rd of 6 children. He graduated from Winona Senior High in 1964 and married Lana (Lander) on December 9, 1964. That union produced 2 daughters, Michelle and Stacy, 7 grandchildren, 4 step grandchildren, and a big handful of great grandchildren (5), with 1 more on the way.

Greg dedicated his life to “cool rides” and helping those who needed it. He began his career as a teacher at Logan High School where he taught science and coached football. It was during these young adult years that Greg and Lana were members of the Winona 4 Wheelers, where they thought it was lots of fun to drive 4×4’s where cars should not be and considered a successful trail ride was one where some or most of the vehicles tipped over. While he was teaching, he had the opportunity to begin his dream job of owning his own business and bought Midwest Off Road Center. This fueled his passion for speed and fast trucks and the family spent many years of weekends at the racetrack watching him win numerous SODA championships. Once racing got to be too much, he and Lana traded the 4 wheels for 2 and spent many miles on their Harley traveling the US and Canada- wherever they felt like going. Greg and Lana were active members of the La Crosse Area Harley Owners Group, where Greg held the title of “Road Captain”.

Slowly the business changed gears and Greg dedicated much of his time making vehicles and homes more handicap accessible for those who needed it. He was especially proud of the work he did for the Veterans and was honored to do so, in fact he refused to retire because he didn’t feel anyone would take care of them as good as he and the guys at Midwest did.

In his spare time, he was a wonderful Dad and Grandpa, and spent many evenings attending football, basketball, baseball, and wrestling matches all while coaching his grandkids from the bleachers. He was a positive supportive influence for his grandchildren, and they learned the importance of responsibility and good work ethics from him.

He also dedicated over 30 years to the Dakota Fire and Rescue Department, in the role of emergency medical responder, fire fighter and as deputy chief. He felt this calling when he would wait up for Lana to come home after emergency calls to find out what was going on, so he decided just to join the department also. Even though he had longevity in the department, he did not want to be chief because “Then he wouldn’t be able to run into burning buildings, he would have to supervise the scene and not be able to do the fun stuff”

Greg was a good man, a proud man, proud of his business, proud of his fire department and proud of his family. A man of few words, but when he talked, you listened, especially if it was in his teacher’s voice.

On Wednesday, December 21, the Dakota Fire & Rescue Department will be escorting Greg from Schumacher-Kish Funeral Home in La Crescent to the Bill Grant Community Center, 725 Frontage Road in Dakota, Mn arriving at 4pm where a Celebration of Life will be held from 4pm to 7pm.

In accordance with Greg’s wishes, in lieu of flowers, memorials may be given to the Dakota Fire and Rescue Department or New Leash on Life Dog Rescue – Rockland.

While talking with the Chaplain near the end, he stated, “If you do good in life, good will come to you” This is how he lived.

The eyes are leaking Dad, and will be for a while, we love you and know you are watching all of us from above.

COPYRIGHT 2022 BY NEWS 8 NOW/NEWS 8000. ALL RIGHTS RESERVED. THIS MATERIAL MAY NOT BE PUBLISHED, BROADCAST, REWRITTEN OR REDISTRIBUTED.