Hero Aviator Of The Tuskegee Airmen Honored At Arlington Burial 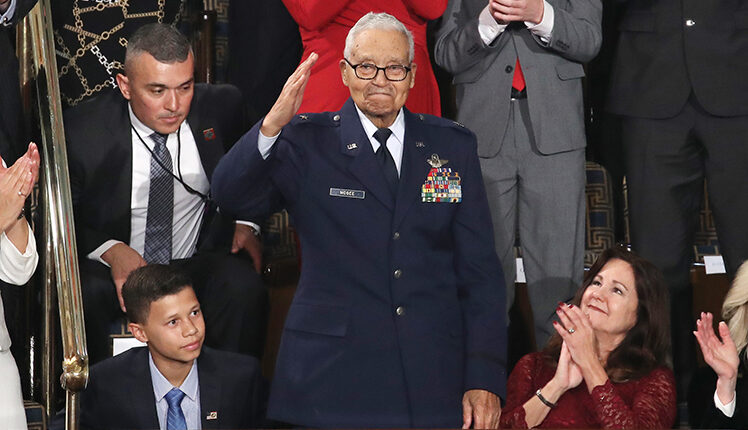 WASHINGTON, DC – FEBRUARY 04: Retired US Air Force Col. Charles McGee, who served with the Tuskagee Airmen, salutes during the State of the Union address with his great-grandson Iain Lanphier in the chamber of the US House of Representatives on February 04 , 2020 in Washington, DC. President Trump delivers his third State of the Union to the nation the night before the US Senate is set to vote in his impeachment trial. (Photo by Drew Angerer/Getty Images)

(CNN) — When Charles McGee first dreamed of flying above the clouds nearly a century ago, the US military wouldn’t even allow Black Americans to do so.

On Friday, in ceremonies attended by family and friends, at which the secretary of the Air Force and chairman of the Joint Chiefs of Staff came to pay their respects, McGee, honored as a brigadier general and famed for his heroism as a member of the fabled Tuskegee Airmen, was laid to rest at Arlington National Cemetery, the most sacred of all grounds for US service members.

McGee, who was 102 when he died in his sleep on January 16, successfully completed 409 air combat missions across three wars — World War II, Korea and Vietnam — serving a total of 30 years of active service while overcoming the racial barriers of his day .

But he is best known for being a member of the Tuskegee Airmen, the first Black aviators in the US service corps and whose heroism has become legendary in US military history.

At a graveside service Friday, family and friends solemnly stood shoulder to shoulder in sweltering heat. Some held black umbrellas to shield themselves from the sun, lowering them at the request of those behind them who wished to catch a glimpse of the military honors bestowed on a man they adored.

His casket, draped with the American flag, was escorted to the service on a horse-drawn carriage where he will lay alongside his wife, Frances, who was buried at Arlington in 1994.

“The Lord is my shepherd; I shall not want,” a military chaplain recited, and chants of “hallelujah” were shouted throughout the service. The chaplain also prayed Numbers 6:24-26, asking God to “bless him and keep him.”

At one point, there was a military flyover that included Red Tail F-16’s from the Alabama Air National Guard 187th Fighter Wing, a squadron descended from the Tuskegee Airmen squadron, that performed the missing man formation as it flew over the ceremony.

A separate funeral service, which was closed to the media, was also held Friday.

Born in Cleveland in 1919, McGee joined the US Army in 1942 while studying engineering at the University of Illinois, earning his pilot’s wings in 1943 and joining the Tuskegee Airmen, according to Tuskegee Airmen, Inc. Before World War II, Black Americans were not allowed to become aviators in the US military, but in 1941, the US Army Air Corps created what was then an experimental training program for Black aviators at Alabama’s Tuskegee Army Airfield. From 1941 to 1946, 966 Black military aviators were trained at Tuskegee, according to Arlington National Cemetery.

Despite his desire to serve his country, McGee was burdened with the racism of the Deep South, which was still racially segregated in the age of Jim Crow.

“Back in those days, the city of Tuskegee was off limits, and the sheriff wasn’t a friend. You didn’t buy gas or walk down the street in certain areas,” McGee told The News-Gazette of Champaign, Illinois, in 2019.

McGee flew his first mission in 1944 while stationed in Italy with 301st Fighter Squadron of the 332d Fighter Group. He also escorted Boeing B-17 Flying Fortress bombers and a Consolidated B-24 Liberator over Austria, Germany and the Balkans.

He was promoted to captain after flying a total of 137 combat missions, and at the end of 1944, became an instructor on North American B-25 Mitchell bombers. After World War II, he returned to the US where he became a base operation and training officer at Lockbourne Air Field in Columbus, Ohio. During the Korean War, he again flew P-51 Mustangs with the 67th Fighter Bomber Squadron, completing 100 missions and earning a promotion to major.

In Vietnam, he flew an additional 172 combat missions. When he retired as a colonel in January 1973, he had logged 6,308 flying hours during his service.

After his distinguished military career, McGee became director of the Charles B. Wheeler Downtown Airport in Kansas City, and at 58, he received a degree from Columbia College in Kansas City, fulfilling his goal of obtaining a college degree.

McGee received numerous military awards and distinctions, including the Distinguished Flying Cross with two Oak Leaf Clusters, a Bronze Star and the Legion of Merit with one Oak Leaf Cluster. On February 4, 2020, he received an honorary promotion to brigadier general from then-President Donald Trump and was a guest of the White House at the State of the Union address later that night.

A member of Alpha Phi Alpha Fraternity, Incorporated, McGee received numerous accolades, including the Congressional Gold Medal in 2007. In 2011, was enshrined in the National Aviation Hall of Fame.

Reflecting on his love of flying, he recounted to the News-Gazette in 2019 how he enjoyed “going up in the air; loop, roll and spin; and then come back and put my feet on the ground” and “flying up to 45,000 feet to watch the sun set and stars come out.”

As he put it, “It makes you realize we human beings are just one small aspect in a mighty grand universe.”