How did MSU lose to Illinois? – 3 points to know 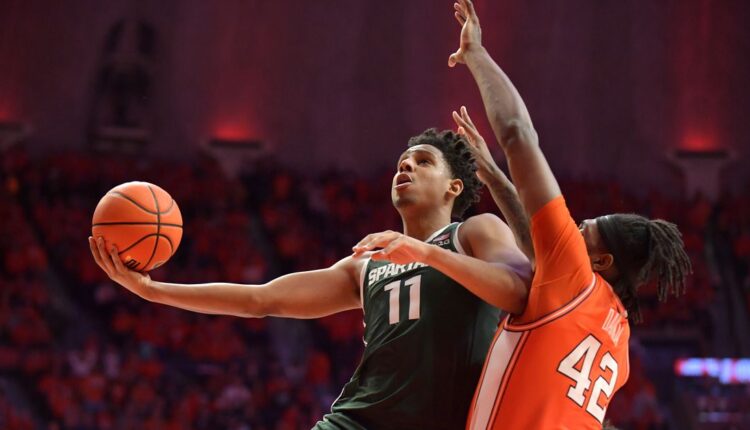 For 30 minutes on Friday night, Michigan State looked like the better team. More than that, they were winning against Illinois playing a style completely different than their standard this year. For those thirty minutes it looked like incredible coaching and a team that was capable of winning in some unexpected and flexible ways.

The problem: the game lasted 40 minutes. Over the final 10-minutes of playing time, Michigan State fell prey to the rowdy crowd in Champaign, Illinois, and its own shortcoming losing 75-66.

The loss hurts. Any road win in the Big Ten is extremely valuable. This game felt like an opportunity to cement Michigan State as top contenders in the league. Instead it left the team with many questions – and potentially some concerning injury issues for Malik Hall.

Here are my shoot from the hip takes on the game. Like an end of shot clock heave, ready them and let me know what your deep shot after the game is in the comments.

POINT 1: MSU’s game plan was to go old school MSU and they got punished for it

If you read my preview piece on this game, you’ll know this matchup was one of opposites. Illinois is amongst the nation’s leaders in interior offense and one of the worst three point shooting teams in the country. MSU is statistically the exact opposite. Their offense comes from their guards and wings, and their shooting is in the top 50 from three point range.

The game seemed to be a contest of one team winning by sticking to their strengths and limiting the other team’s strengths. For the first 30 minutes my preview made me look like an idiot.

At about the 11:30 mark left in the second half, I wrote the following notes:

“Anyone that read my preview is going to have a field day.

-MSU has ZERO points from 3-point, and incomprehensibly has attempted only 2 three pointers

-The game is being decided completely in the paint

Well, unfortunately, I should have had more faith in my game analysis – and less in the Spartans. At the time I wrote the notes above, MSU was winning and doing it in a style that did not match any prediction.

ALL of those stats should mean Illinois was dominating the game. Instead, MSU was winning.

The Spartans came out with a clear game plan to NOT shoot the three, drive the ball relentlessly inside, and crash the boards.

This worked – until it didn’t.

The Spartans dominated the boards, grabbing 42 rebounds to 30 for Illinois. And until late in the second half that disparity was even worse. For the first two thirds of the game, MSU had double digit offensive rebounds and Illinois had about 2 (they finished with 8, potentially the only stat outside of 3 pointers that determined the close of this game). This led to a dominant performance in the paint for MSU!

This old school MSU style featured every player crashing the offensive boards, and every single member on the roster – except perhaps Walker – doing their best back to the basket moves repeatedly.

It was fascinating to watch a team that has been full of jump shooters all season, show this offensive side. Even Carson Cooper got in on the act in the first half, scoring a nearly 6-points in relief of Mady Sissoko.

The problem is you can only fight gravity for so long.

Once Illinois realized Terrence Shannon’s first half explosion was not sustainable (credit to MSU defense for adjusting) they sat him down and went back to the style of game that favored them. Illinois rode big men Dain Dainja and Matthew Mayer for a combined 39 points – almost all of that in the second half.

The Spartans had no answer. Getting beat under the basket defensively, and the offense stalling out as drives became harder to take, they didn’t have a counter punch.

Either because their game plan told them NOT to shoot threes, or because they sensed they were off all night, MSU attempted just 4 three pointers in the first 36 minutes of play. The final three 3pt shots they attempted all felt like desperation heaves when they were down. MSU averages MAKING more three pointers than they took in this game.

Further, for all the good MSU seemed to do in the first half defensively, they somehow let one of the worst teams in the country at possessing the ball turn the ball over only 5 times. For comparison, MSU took care of the ball relatively well (except one bad 4 turnovers in 5 possessions stretch) and still turned it over 9 times.

For a team led by a fantastic back court, MSU wasn’t even passing the ball. Recording only 4 total assists in a game is so shocking, that I literally checked three different outlets to make sure that stat was right.

MSU came in aggressive, threw an unexpected “old school” MSU approach at Illinois and looked good, right until they didn’t.

Regardless of game plan, you just don’t win games taking 4 real three pointers (regardless of if you hit them), and recording 4 assists. MSU found that out the hard way.

POINT 2: Hoggard is the guy…in training

During the second half, AJ Hoggard was running the fast break with MSU up comfortably. In a flash back to his freshman year, AJ threw the ball to someone in the upper deck (part of that 4 turnovers in 5 possessions stretch). Predictably Izzo had a breakdown, and lost it at Hoggard.

Unlike in his Freshman or Sophomore year – or even earlier this year, AJ responded well. By the end of the called timeout, Hoggard had his arm around Izzo’s shoulder while being lectured. The smile on Hoggard’s face recalled the glory days of Draymond Green’s fiery relationship with Izzo.

It is clear that AJ Hoggard is THE GUY for MSU. That is not a slight at others. Malik Hall is essential, and defensively the team is simply not the same without him. Hauser has proven himself to be indispensable and an iron man in minutes. Walker has carried this team at various points this year, and may still be the best last shot option on the roster. But without Hoggard on the floor right now, the team looks a step slower, and a lot less emotionally engaged.

That is a HUGE change for AJ’s influence. The problem is, it’s still coming together for Hoggard and the rest of the team around him.

This game needed leadership and grit. Hoggard tried to provide both. At the end of the game, he was the one hunting for his shot and keeping the team in it. Unfortunately, it just wasn’t enough. Hoggard’s outside shot is still not reliable enough to warrant his early in the shot clock heave from the 3-point line (that he missed). And Hoggard struggled to find open players.

In his defense, it’s hard to know if that was truly Illinois defense, or if the Spartan players were so convinced AJ was going to one-man-show his way at the end, that they didn’t work to get open. Regardless, the entire team looked gassed. The crowd was rocking and the momentum was all against MSU.

Maybe someday (hopefully soon), Hoggard can single handedly bring the team back from an end of game disaster like that. At the moment he still needs help. In this game, that help wasn’t there.

POINT 3: MSU Rotation is coming into sight, showing the power and the pitfalls of this roster

Pierre Brooks season average is likely inflated beyond his projected use as he filled in during injuries to Malik Hall and Jaden Akins, even entering the starting lineup during a stretch both were out. Still, it’s a precious fall to 4 minutes.

Kohler’s reduction in minutes is part of the Carson Cooper story. Since Kohler seemed to breakout against Nebraska with 10 points, and looked serviceable defensively against Hunter Dickinson and Michigan, Cooper has usurped almost all of Kohler’s minutes. Cooper looked on the verge of a breakout against Illinois with 6 early points, then mostly disappeared later in the game despite.

Still, it seems that either Kohler or Cooper will take the non-Mady Sissoko pure center minutes, shortening the rotation by one player, and Pierre Brooks may be on the outside looking in if Akins and Hall remain healthy. The latter of which may not be guaranteed.

Beyond shortening the bench and a platoon of Sissoko and Cooper/Kohler, the rotation is clarifying.

MSU’s rotation rides Walker and Hauser as iron men, both recording 35+ minutes in most games. Hoggard is seemingly being kept fresh with his average running closer to 30 minutes per game and Holloman soaking up those ten minutes spare, plus a few more in relief of Walker. The Akins/Hall balance looks game to game and injury based. In this game, Akins played the entire close of the game with Hall out due to a recurrence of his ankle injury.

This lineup SHOULD be able to put some points on the board. If shooting performances like Illinois and Michigan are the exception rather than the rule, that lineup has the ability to put some serious points up at the three point line. If MSU could bring the driving energy and paint pressure shown for the bulk of the game against Illinois, the lineup could be very hard to stop offensively.

The problem is going to be defense. MSU has great perimeter defense. Against Illinois they kept the three point line mostly locked down until Mayer got hot at the end of the game. Even with Terrence Shannon scoring 15 points in the first 9 minutes, MSU adjusted and Shannon was a non-factor the rest of the game.

The Mayer explosion is part of the problem. For the final ten minutes of the game, Illinois abandoned the outside shot and rode two talented scorers down low. MSU looked powerless to stop the combination of Mayer and Dain. And once Mayer drained a few threes, the floor opened up and Coleman Hawkins remembered how to play and did some damage down low.

Illinois dominated down low through a variety of approaches. They straight up scored over Sissoko and Cooper. They ran straight through Hauser more than a few times. And, most concerningly, they found ways to use the Spartans switch heavy defensive approach on screens to isolate Walker (and occasionally) Hoggard on a big man.

MSU knows it runs a risk with the talent and experience of their centers. The Hauser defensive issues against true big men (and, unfortunately, against some others) is well documented. Coaching is going to have to fix the switching issue. MSU’s lineup is athletic and talented defensively one through three. Illinois found a way to turn that flexibility against MSU.

This lineup could be an offensive juggernaut, but it’s not doing it. The squad still ranks in the bottom third for points per game in the Big Ten. Even when MSU goes small, and packs the floor with potential scorers, they are just not seeing offensive results.

Defense will have to hold up to keep games close. Illinois paints a picture of an MSU team that can be exposed defensively, and that could spell trouble.

Agree? Disagree? Let me know your takeaways from the game in the comments.