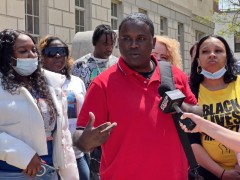 Peoria, IL – The Chicago Alliance Against Racist and Political Repression (CAARPR) brought a dozen activists from Chicago to Peoria, Illinois May 16 for the opening of the federal trial of Anthony Gay. Gay had previously defeated the charges when, in an historic trial, he won a hung jury representing himself. He is facing the same assistant US attorneys and federal judge.

The charge against Gay is that he is a felon and had a firearm.

During the proceedings, Gay pointed out that there is no physical evidence of him having a firearm. There was a pistol found by the Rock Island police in the vicinity where they arrested him, but it has no fingerprints or DNA; there are no photos or witnesses of Gay with the pistol; and the testimony by a police officer rests on a claim that Gay fell flat in the spot where the pistol was located. Again, there is no photographic evidence of Gay falling there, and the location was a white gravel-covered alleyway. When Gay was photographed following the alleged fall, there was no gravel dust on his clothes.

Frank Chapman, field organizer of CAARPR and executive director of the National Alliance, remarked about the day in court. “The prosecution’s case was weak, and a classic example of how frame-ups work. They don’t have evidence. They concoct evidence. And the evidence that they concoct is based on lies.”

Speaking about Gay’s performance in court, Chapman continued, “Anthony was consistently showing that they didn’t even have a good theory of the case because they didn’t feel like they needed one. He tore the prosecution up by just sticking to a few simple facts. Did you find me with a gun?”

Going on, Chapman said, “They showed us about an hour of videos altogether. Not one video that shows him stumbling and falling on his face. He has organized his defense around disputing and exposing all the concocted evidence that the US attorney’s office put together.”

Nina Johnson-Horton of the organization To Seek and To Save (TSTS), dedicated to exposing wrongful convictions, which was also among the activists from Chicago in the courtroom. “Anthony Gay has the ability to demonstrate to the jury – although it is not of his peers – that the government has not proven their case beyond the shadow of a doubt that he had a gun or any ammunition.” Johnson-Horton referenced here the all-white jury in Peoria, a city that is 27% Black and 6% Latino. Reverend Eugene Horton of TSTS said, “I saw certain practices that lead to wrongful convictions. An all-white jury for a Black man? I think it’s a kangaroo court.” Mrs. Johnson-Horton said, “Put this trial in the context that Anthony was imprisoned for 24 years – 22 in solitary confinement – for the theft of $1.”

In 2018, Gay was able to win his freedom from the Illinois Department of Corrections by arguing successfully that the multiple additions to his original sentence should have been served concurrently, not consecutively. So, in those proceedings, he represented himself.