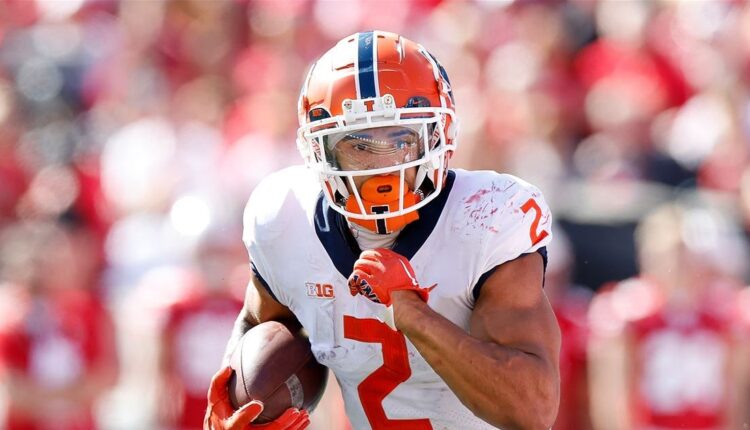 CHAMPAIGN — Illinois running back Chase Brown has declared for the 2023 NFL Draft and will not play in the ReliaQuest Bowl, he announced via social media on Friday.

Brown was one of three finalists for the Doak Walker Award, which goes to the nation’s top running back and was Second Team All-Big Ten.

“First, I want to thank God for blessing me and putting me in this position,” Brown wrote on social media. “Through the highs and lows, my time at Illinois has been the best experience of my life. I earned a degree, advanced as an athlete, and formed lifelong connections.

To my family: I’d like to express my gratitude to my mother, grandmother, brother, Yates family, Cross family, as well as all extended family for their unwavering love and support throughout this journey. You helped shape me into the man I am today. Without you, none of this would be possible.

To my teammates: Thank you for pushing me every day. Our memories and bonds formed through highs and lows will last a lifetime. It has been a pleasure to play alongside each of you.

To my coaches: Thank you for believing in me. Your dedication to excellence pushed me to become the player I am today. The life lessons and leadership skills you taught me have made me a better man.

To Illini Nation: Thank you for all of your help and for welcoming me to this wonderful university. Your dedication, passion, and love for this team are greatly appreciated. It has been an honor and a memorable experience to play for you all. I will always bleed orange & blue.

After careful consideration, I have decided to forego the upcoming bowl game and enter the 2023 NFL Draft.”

“I think the things I’ve learned about Chase have gone beyond even the expectations that I thought he was going to be able to do: the perimeter blocks downfield,’ Illini head coach Bret Bielema said earlier this month. “…From what I witnessed out of Chase and what I’ve witnessed some of my running backs in the past go play in the NFL for seven, eight, nine 10 years, he’s as good as anyone I’ve ever had and has a chance to be one of the best I’ve ever coached.”

Brown, who transferred after one season at Western Michigan in 2019, also has the second-most career rushing yards (3,206 yards) for an Illinois running back behind only Holcombe (4,105 yards).

“I told him this at the end of the game the other day how appreciative we all are — and I am, in particular, as the leader of the offense — of his consistency,” Illini offensive coordinator Barry Lunney said earlier this month. “It’s always a great joy as a coach when one of your better players or your best player when your guys who are your dudes, and the way Chase has played, it’s always a joy when not only are they your better players but they’re your best people too. He’s a phenomenal young man and leader. I’m not saying he’s a better person than any guys we have on our offense but the fact that he does what he does and carries himself the way he carries himself on a daily basis just speaks volumes about the type of person he is. He’s obviously meant an awful lot to our football team. To have somebody consistently break tackles and run and be gritty and protect the quarterback and do anything he can do to help us win the game.”

What it means: This was hardly unexpected. Brown has accomplished everything he needs to accomplish in college and as a running back should financially benefit off of his next career hit. That’s in the NFL. Illinois returns Josh McCray, who missed all but three regular season games with two separate injuries (knee and ankle) but was a standout as a freshman in the 2021 season. Reggie Love showed flashes during the year as well. Aidan Laughery, a freshman, dealt with injuries and had just one carry. Illinois also added Jordan Anderson in the Class of 2022, another big back, and has a commitment from Kaden Feagin, a four-star running back, in the Class of 2023.

The Illini have a great pitch at running back after Brown’s monster season and Bielema has had 15 running backs rush for 1,000 or more yards in 14 seasons as a head coach (including 2022, which still has a bowl game remaining). Should Illinois want to explore the transfer portal for a back, it should be able to draw some attention.

Illinois will certainly get a glimpse of its future during the bowl game.