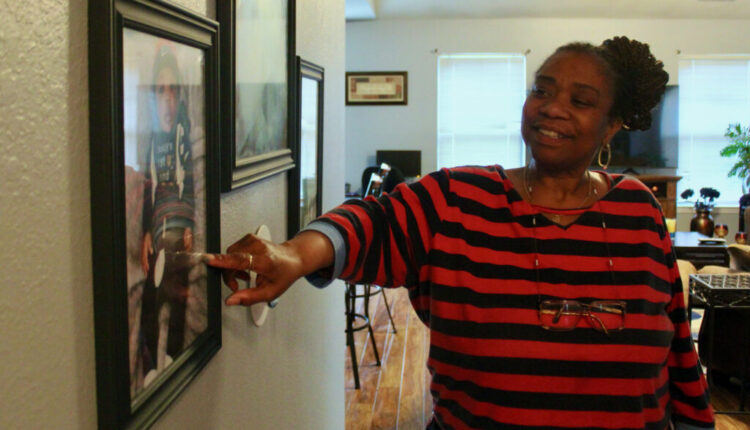 Yvonne Miller likes driving her white Volvo because it reminds her of driving with her son.

On her license plate is the word “STUFF.” The bold, black letters stand out against the light blue color of her “Prevent Violence” license plate.

“Stuff” is a tribute to Miller’s 23-year-old son, Christopher Kelly. It was a nickname that his family members gave him when he was a child.

Miller points to her “Prevent Violence” license plate. “STUFF” was a nickname for Miller’s son, Christopher, who died after being shot and killed in a Champaign parking lot.

“He looked like a stuffed animal when he was little,” Miller said. “He was a little porker, and my dad gave him that nickname.”

Christopher died in August 2020 after being shot and killed in a Champaign parking lot.

His story is not unique to Champaign.

In Champaign, gun violence more than doubled between 2019 and 2021. Although the number of shooting incidents has decreased somewhat since March of 2021, around 75% more people have been struck by gunfire during just the first four months of 2022, according to the most recent data.

Many residents say they are concerned about the increasing gun violence in the community.

Moreover, they say gun violence continues to change their perceptions of the city, with some feeling unsafe in their homes and neighborhoods.

Trauma’s impact on a community

​Founded in April 2019, the Trauma and Resilience Initiative – known locally as CU TRI – is a non-profit organization based in Champaign County.

The initiative aims to help survivors of community violence by providing group counseling and crisis care. It also has a peer ambassador program for ambassadors to give one-on-one support to help residents deal with anxiety and trauma.

Karen Simms, the program’s director, said community violence is linked to issues – like poverty and racism – that impact economically marginalized neighborhoods, which tend to be communities of color.

Gun violence, she said, is a small part of the bigger picture of community violence.

“Gun violence is just a reflection of a community’s trauma,” Simms said.

A violent event doesn’t have to occur in someone’s life for it to be traumatic for them, she said. Even if gun violence occurred in a family’s neighborhood, it can still be traumatic.

Janice Walker, the project coordinator at the initiative, has lived in Urbana for more than 20 years. Walker said she doesn’t feel safe in her home because of increasing gun violence.

“Just because I’m in my house doesn’t necessarily mean that I’m safe,” she said. “I accept that I don’t like it. I don’t want to feel that way, but I understand that that’s a reality. That’s my reality.”

“Human beings are social creatures,” Simms said. “When you don’t feel like you can trust your neighborhood and feel safe, that impacts your sense of wellness and well-being.”

Walker said the community doesn’t feel as friendly as it did before the increase in gun violence. She said many members of the community – especially older folks – don’t feel safe.

“It’s an unnatural feeling to feel that you could be a target any day, every day,” she said.

“I think it has created a culture, like, it’s sort of fed into more violence,” Simms said. “Actually, the more unsafe people feel, the more likely they are to use a gun or to do the things that create more community violence.”

In 2021, 16 people were killed by guns in Champaign while 77 were struck by gunfire.

According to a report published by “The Trace” newsroom, 20,726 people in the US were killed with a gun in 2021, including murders, accidents and homicides.

the Gun Violence Archive began collecting data on gun violence incidents when it formed in 2013. In 2022, 6,106 people have died so far due to gun violence in the United States, excluding suicides.

She said these issues disproportionately affect majority-minority communities in Champaign.

Feinen said the city is beginning to increase its funding to local non-profit organizations and community partners – such as First Followers and the CU Trauma and Resiliency Initiative – to help them make a positive difference in the community.

Instead of supporting only the police department, Feinen said funding these organizations will let the city treat its “most vulnerable citizens” better.

“Long term, the social services interventions should be making a difference for the future of our community and for the residents,” Feinen said. “And that’s really the most important [thing]it’s about the people within our community.”

After Christopher’s death, Miller joined Mom’s Demand Action, an organization of moms dedicated to ending gun violence. So she is planning to start a grief group for mothers like her who have lost their children to gun violence.

“It’s the family members that have to start talking to their own family members who are carrying the guns,” Miller said. “The police can only get the people once they do it, but that’s too late. We want to get them before they shoot the gun.”

She said Christopher’s death doesn’t make her want to leave Champaign. Instead, it makes her want to fight harder to end gun violence in Champaign.

“I don’t think I’m going anywhere,” she said. “I’m gonna stay here and fight so we can get these guns off the streets, and that’s for him.”