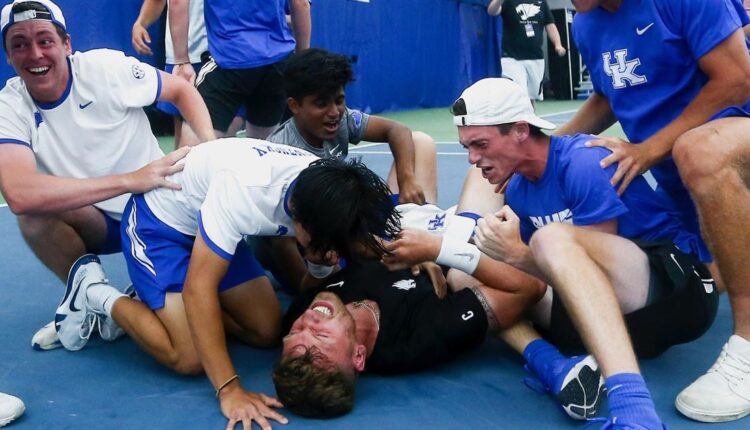 The 8-seeded Kentucky (24-7) men’s tennis team celebrated one of its biggest wins in the last decade on Saturday afternoon, taking down No. 9 Wake Forest (33-7) in the NCAA Tournament Super Regional round at the Hilary J. Boone Tennis Complex by a 4-2 result.

With the win, the Wildcats advance to the NCAA Quarterfinals for the fifth time in program history and will take on top-seeded TCU on Thursday in Champaign, Illinois. UK will seek its first semifinal appearance in school history.

“We’ve been working way too hard to lose matches like this, so I’m just really happy all the boys came through,” said Millen Hurrion. “My last match here in Lexington, to clinch like that is something I am going to remember for a long time.”

The match started in doubles with the visiting Demon Deacons claiming an early lead. Liam Draxl and Alexandre Leblanc managed to keep their contest against Ben Draper and Matthew Thomson close but were unable to find a win, falling 6-4. After taking a 3-2 lead, Gabriel Diallo and Joshua Lapadat fell behind Siddhant Bianthia and Jakob Schnaitter, losing 6-3 as Wake Forest captured the doubles point.

Despite being down 1-0, the Wildcats weren’t phased. The team went on to start singles play in commanding fashion, winning five of six first sets.

The fourth-ranked Draxl led the way for UK, tying up the match at one apiece after putting together a masterful straight-set 6-3, 6-1 victory against Jurabek Karimov. The junior started the second set winning five consecutive games and capped off his match by placing a ball just out of Karimov’s reach to put the first point on the board for Kentucky.

Wake Forest took another lead by winning on court four. Francois Musitelli trailed after dropping the first set and competed in the second, but could not overcome Rrezart Cungu, conceding the match by a 6-3, 7-5 result.

Kentucky’s JJ Mercer edged past Banthia in the first set, winning the tiebreaker, and came alive in the second to once against tie the match. The Huntington, West Virginia native’s seventh win of the season came at a key moment, claiming court six in a 7-6(7-3), 6-1 final, putting the score at 2-2.

With courts two, three and five in tight third sets, weather caused the match to enter in a delay. Lightning was detected near the Boone Complex, putting teams vying for a spot in the Elite Eight on pause for a total of 77 minutes.

No. 21 Diallo’s match was stopped at 6-2, 3-6, 5-1 in the third with the game at 30-40 when the teams were advised to head into the locker rooms. Using his powerful serve, the Montreal native earned two straight points and clinched his match, helping the Wildcats take a 3-2 lead.

Team captain no. 83 Hurrion competed in two tight sets, both ending in 6-4 scores, splitting them with No. 61 Edward Nava. The fifth year held a 4-2 lead before the pause and took two straight games to win the match for Kentucky in a 6-4, 4-6, 6-3 final.

Kentucky will make its fifth all-time appearance in the Elite Eight, with its last coming in 2011. The Wildcats conclude their season at the Boone Complex with a 14-2 home record.