Kofi Cockburn getting his shot to impress NBA scouts 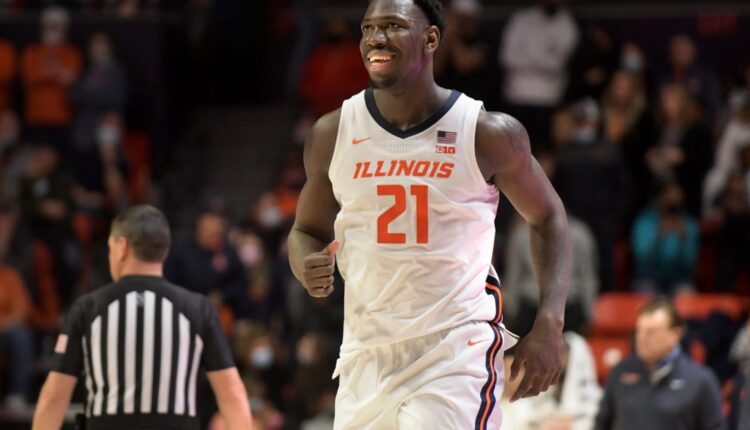 Illinois basketball is trying to put another former player into the NBA for the upcoming season.

Seeing Ayo Dosunmu get drafted in the 2021 NBA Draft was exciting. The Illini great got picked by the Chicago Bulls and had a solid first season. I also believe his role will continue to grow with the organization. My hope is Ayo’s right-hand man at Illinois, Kofi Cockburn, will get his chance at the NBA as well.

On April 20, Kofi decided to declare for the NBA Draft. This was the third time he would do so, as he would withdraw his name the first two go-arounds. This time would be different, though. In his announcement, Kofi said he was hiring an agent and remaining in the draft process.

The end of an era was official for the Orange and Blue. Kofi spent three successful seasons in Champaign, and now he is going to try his hand at the professional ranks.

Former Illinois basketball great Kofi Cockburn is going to get his shot at the NBA Draft.

Despite most, if not all, NBA mock drafts having Kofi not getting selected in the first or second round, the big man clearly thought the NBA process was the better route for development. I would agree with his decision. If he wants to develop more for the NBA, competing against NBA players is the way to do that.

Some people see that Kofi might not get picked in the 2022 NBA Draft, but that doesn’t mean he won’t get a shot at getting noticed. On Tuesday, Jonathan Givony of ESPN announced more invitations to the NBA Combine that is to be held in Chicago next week. Kofi is among the names Givony mentions as having received an invitation.

Kofi Cockburn (Illinois), Collin Gillespie (Villanova), Scotty Pippen (Vanderbilt) and Kris Murray (Iowa) have all been invited directly to the NBA Combine in Chicago next week, per sources. pic.twitter.com/Y7QHMgD82o

This is big for the former Illini great. Kofi needs the exposure to help NBA scouts see his true potential. It’s one thing guarding and overpowering a college athlete, but the NBA is a different animal. He is going to go up against big players who can shoot the ball and have tremendous speed.

Personally, I’m excited to see what Kofi can do in the NBA Combine. I think an underrated element of his game is his athletic ability. He is going to wow scouts. I am hoping he gets a chance to play with some players as well. This will enable Kofi to show off his ability to guard on the perimeter. Just because he is built more like a traditional big man doesn’t mean he can’t move.

Kofi will land with some NBA or G-League franchise this season. He is going to get every shot possible. I hope he can show the world that he belongs in The Association.

Africa: Soil Microbes Derived Products Could Be an Alternative to Expensive Agricultural Fertilizers