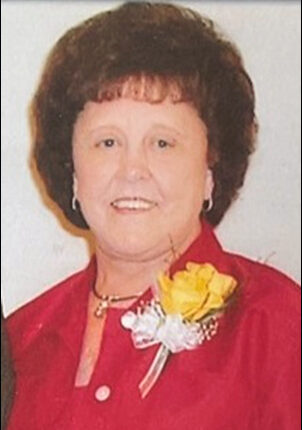 Lovella (“Val” as she was known in high school) was born on August 17, 1935, in Boone Township, Jasper, Indiana, to Walter Johann and Emily Margaret (Buchta) Sendelweck. Growing up on the farm, she was the youngest of three children, Clarence (& Janice) Sendelweck who passed in 2007 and Ioma (& Edward) Wening who survives.

With their friend and business partner, Dave Buehler, and the opening of this single location, a restaurant company was formed. It would continue to grow and in 1969, Lovella left her employment at Jasper Wood Products to focus full-time on the work of the growing company. She would lead an office team that would originally do the payroll and accounting in the basement of her house until, in 1976, a new corporate office building, Der Buro Complex, was built and the back-of-house operations were moved into it. The operating company would eventually be known as BR Associates with hospitality units in six states (IN, KY, MI, IL, NY, FL). The company was built on the philosophy that a good cup of coffee and a genuine never smile go out of fashion. Weekends were filled with parades, local events, school fundraisers, and making sure the guest was always satisfied.

In 1986, the company was recognized by the hospitality industry as the 6th largest multi-concept private restaurant group in the nation. For each recognition that was given to the company or her husband, Bob would say that without his wife working side-by-side with him every day, none of it would have happened and that each recognition was equally earned by her.

Lovella worked alongside Bob on many of the side businesses or development investments that the couple took on. From taking care of the books to her work on design, decorating or viability of these endeavors, Lovella would be involved in each project. During her long workdays, family was never far from her mind or her actions. Her passing at 7:18 am was indicative of her always thinking of her husband—his birthday was July 18th.

Following in their parents’ footsteps, Al and Sid started their own restaurant company. In 2014, while celebrating 50 years in the restaurant industry, the Ruckriegels combined both companies to form SERVUS!. Today, SERVUS, Inc., a real estate holding company, still defines excellence.

Lovella served various organizations in the community, often in a treasurer or accounting role in which she was very proud of her bookkeeping skills. This included such groups as St. Paul’s Lutheran Church, Redeemer Lutheran Church, Redeemer Women’s Club, Fifth Street PTO, and most recently her homeowners’ association. She volunteered her time in joining to start such organizations as the Northwood Good Samaritan Retirement Community, where, in 1966, she helped place the furniture and put on the first bedlinens to ready it for opening. Lovella was recognized as a “Distinguished Alumnus” of Jasper High School and was very proud of the gifting to the city of Jasper of the 15-foot clock at the restored train station in her and her husband’s name. No honor, though, probably meant more than receiving the ‘Key to the City’ of Jasper, which to them exemplified that they had left a positive impact on the hometown that was forever in their heart.

The Ruckriegel Family extends its gratitude to the staff of the Memorial Hospital in Jasper for the care and comfort you offered Lovella and the entire family. Special thanks to Carol Meyer and Kristi Mehringer for their friendship during this time.

In lieu of flowers, memorial gifts may be made to St. Paul’s Lutheran Church or Dubois County Humane Society.

Visitation will be at Becher-Kluesner North Funeral Home on Monday, November 28, from 2 pm to 6 pm Funeral Services will be held at St. Paul’s Lutheran Church in Haysville, Indiana on Tuesday, November 29 at 10 am with visitation prior to the service at 9 am Burial will be in Fairview Cemetery immediately following the funeral service.

Elly Hanauer-Friedman was elected to the Champaign County Board in District 4 : SPlog : Smile Politely