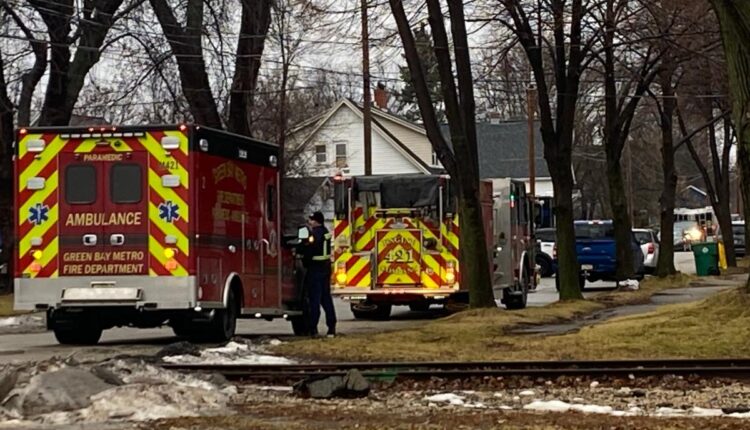 Green Bay police and rescue personnel stage near the 1300 block of Smith Street, where there is a large police presence on Wednesday morning.

GREEN BAY – A 24-year-old Green Bay-area man believed to be connected to the Dec. 20 shooting of three people on Smith Street was arrested Wednesday in Oconto.

The arrest came on the heels of another arrest Wednesday after police surrounded an east-side home.

One of the shooting victims — a 42-year-old Green Bay man — has since died, Detective Lt. Brad Strouf said Wednesday afternoon. Police have not released his name.

At about 10 am Wednesday Green Bay police surrounded a home in the 1300 block of Smith Street where a person of interest was reported to have “vital information” into the killing of the 42-year-old man, as well as the nonfatal shootings of a 23-year-old Green Bay man and a 41-year-old man from Peoria, Illinois, on Dec. 20, Strouf said. Both of those men have been released from local hospitals and remain jailed on various charges.

As police approached the address Wednesday morning, a man ran inside the home from the front porch, Strouf said.

RELATED:Three men wounded by gunshots on Green Bay’s east side, one with life-threatening injuries

Police were at the house for more than four hours trying to convince the man to come outside the home, placing a SWAT team in charge of the scene. Green Bay Metro firefighters stood by during the incident. What sounded like “flash-bang” grenades could be heard in the vicinity multiple times, but police did not try to enter the home until almost 2:30 pm At that point, police took a 33-year-old Neopit man into custody on multiple warrants.

The man, wearing shorts, could be seen being put into the back seat of a police car and driven away. Police spokeswoman Jennifer Gonzalez said shortly after the arrest that officers had yet to interview the man.

On Wednesday evening, Gonzalez announced that while at the Smith Street home, police discovered that the person of interest — the 24-year-old Green Bay-area man — was instead believed to be at a residence in Oconto County.

Oconto County law enforcement and the Wisconsin State Patrol teamed to take the man into custody at a home on the 300 block of Pecor Street in Oconto. Green Bay Police subsequently have questioned and jailed him on a warrant.

Strouf said detectives intended to interview additional people, but said he could not say how many, citing the ongoing investigation. Nor would he discuss the motive of the shooter.

Earlier Wednesday, Green Bay police had closed streets in the area of ​​the 1300 block of Smith Street, between North Irwin Avenue and North Baird Street.

On Dec 20, police responded to gunshots around the 1400 block of Smith Street. Two shooting victims were found in that area and police learned a third person had been dropped off at the hospital. All three were treated at local hospitals.